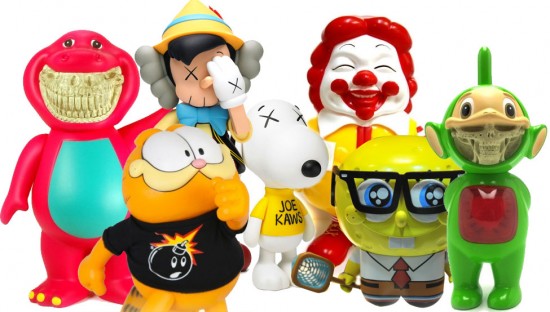 A streetwear brand makes minimal changes to Garfield, and boom, the comatose cat is now an urban vinyl skateboarder. Ron English adds a skeletal grin to a familiar purple dinosaur, and it’s transformed from kid’s toy to designer toy. Last year, everyone from SecretBase [here] to Unbox Industries [here] to UNKL [here] courted a Spongebob Squarepants license. And KAWS, bless his hype machine, released his laziest cross-eyed toy yet: Joe KAWS. Designer toys are starting to look a lot like Saturday morning cartoons. 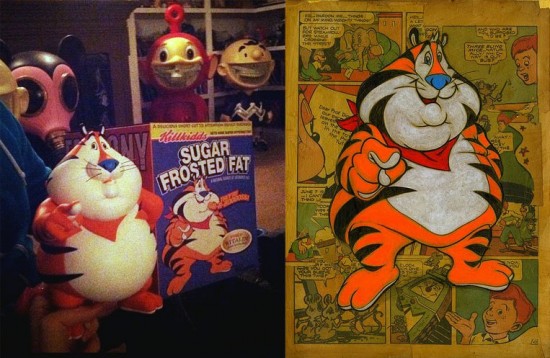 So what’s really separating the kids toys from the “art toys”? 1) Price and 2) Parody. Price is an individual matter, but in my experience, toys for kids cost significantly less than collectible designer toys marketed toward adults. To “parody” means to “produce a humorously exaggerated imitation of”. Ron English has demonstrated parody intentionally and consistently through his political pop art career.

For his next designer toys, he’s set to turn his hijacked cereal box character, Sugar Frosted Fat Tony, into a vinylized riff on Kelloggs’ Tony the Tiger. English has “humorously exaggerated” the mascot’s heft, but does it read as diabetic and lethargic or just kind of cheerful and buoyant? English has spent the last several years tweaking well-known characters into toy art statements. With this one though, has he gone far enough? 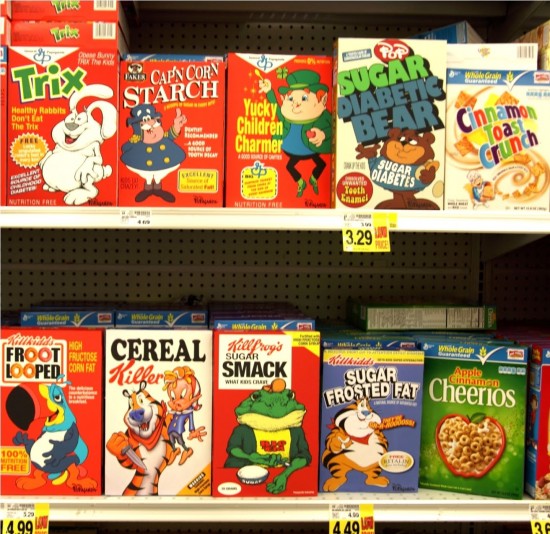 “The idea came from hanging out with my kids and them wanting to eat Lucky Charms. TV gets more of my son’s attention than I do, and there are a lot of flash ads and point-of-sale ads that attract kids, and I want to reverse the trend and make it hip not to eat stuff that will give you diabetes.”

Whereas KAWS sometimes comes off as laughing at his fans [“Warm Regards,” anybody?], English is careful to explain that the Tony designer toys are caricatures and not intended to mock diabetics. He says the disease runs in his family, and he wants to make sugary cereals seem unappealing to kids. 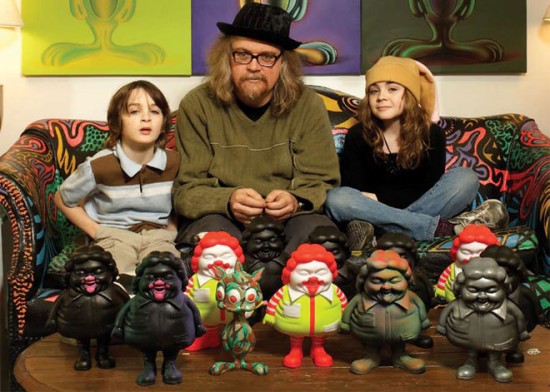 “I’m using the exact means that advertisers use to deliver a different message. If they use a billboard, then I use a billboard. If they put the ad on the front of a cereal box, I use the same thing. It’s a rebuttal to their ads.” 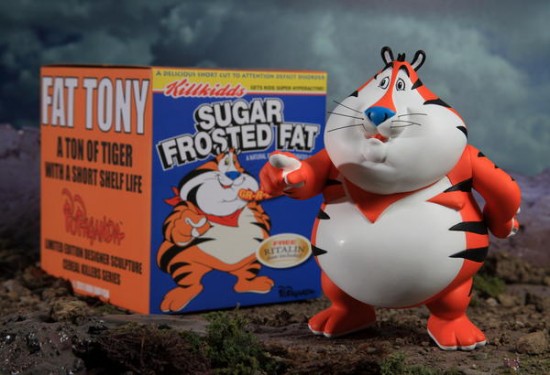 I applaud the idea, but question the execution in this case. Toys, by nature, appeal to kids. Whereas English’s Barnies and Telegrinnies featured garish grins, there’s nothing really “unappealing” about the Sugar Frosted Fat designer toys. On the contrary, it’s kind of cute. At least the figure will be packaged in English’s augmented cereal box, so the “parody” is clearer and the box art adds value to the $60 price. Without the context, you might as well buy a bobblehead Tony for $10… 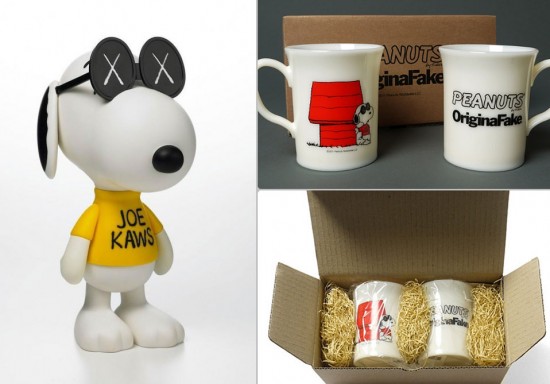 Speaking of cheap tricks, KAWS and OriginalFake continue to exploit their Peanuts license, now with new housewares. The set of plastic mugs, which can only be described as “Goodwill chic,” arrive in a plain cardboard box for the totally reasonable price of ~$65 USD. Behind those sunglasses, Snoopy (and KAWS) are smizing all the way to the bank.