During yesterday’s segment, we profiled designer toy companies for our report on blind boxes. Today, it’s all about the end users of blind boxes: the fans. Toy fans echo the diversity of the toys. We enjoy different aesthetics and buying styles. Some people care about edition size; some don’t. Some fans like vinyl; some prefer resin. But all of us are a little crazy. We’re in an economic recession, and we’re buying toys. Let’s look at what toy fans want and the possible ways of getting it.

When figures are sold in blind box assortments, there are still ways around buying in the dark. We can buy toys on the secondary market (which includes eBay and fan forums) or through open box retailers (stores that open the boxes). Specific figures are often priced higher according to ratio or rarity. Sometimes people take advantage of this and buy speculatively so that they can resell (or “flip”) the hottest toys for big profit. This makes an exciting chase for some fans and a frustrating hassle for others. The alternative is buying blindly and paying for toys we don’t want or already own.

There are precedents that manage to strike a compromise for people who like and dislike blind boxes. David Horvath issued his latest Uglydoll series as a case containing all 12 action figures, each concealed in a blind box. Serious collectors can obtain the whole series easily enough by buying a case; yet the blind box fun still exists for fans who want only a few figures. This strategy is win-win for any company whose objective is to get a set of figures into a fan’s hands. Other ways of increasing the warm, fuzzy feelings? Limit the number of duplicates  (ala Artoyz Elements Alpha Series) or include all standard figures in a case (like MINDstyle’s Scavengers). Mini-figures can also be sold in window boxes, clear bags and on blistercards. In light of these possibilities, a case with 5 or more of the same figure starts looking more like a case of greed.

Permit me the digression of a comparison: Music fans. There are people who follow their favorite bands around the country. There are audiophiles who listen at home on 160gm vinyl. There are fans who download tunes and jog with them. There are folks who don’t know the name of the band, but will turn up the volume when it comes on the radio. Options are good: you can buy music on CD, mp3 and vinyl. You can stream it for free or pay to hear it live. Somewhere, somebody is still listening to cassette tapes.

The Spectrum of Toy Fans

Likewise, toy fans span a spectrum, and the way we feed our habit differs accordingly. I’ve prepared a handy diagram to assess what type of toy collector you are: 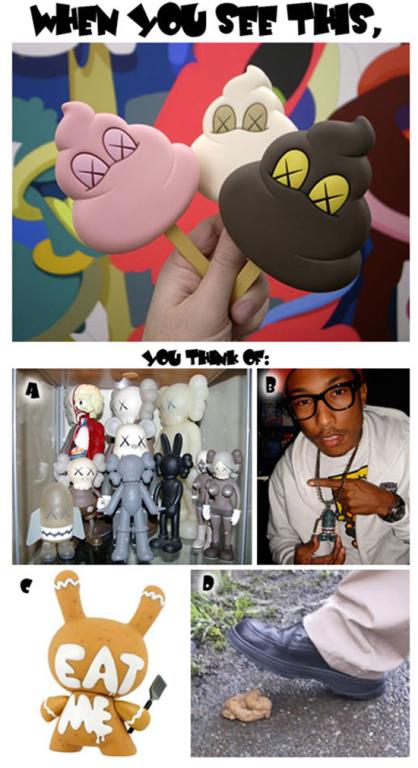 OK that was a joke. Let’s look at the spectrum.

Many collections begin in a cubicle. There is no richer environ for a budding collection than the sparse interior of an office outfitted with a T1 IV hooked into eBay. But not all cubicle collectors become serious collectors. Most, in fact, are content with a smattering of vinyl across their desk for starting conversation or distraction. These fine folks keep their sanity and their savings accounts intact.

Whitney Kerr of Chicago-based toy store, company and gallery Rotofugi tipped me off on how to access the cubicle collector contingency: Yelp. Rotofugi’s listing has over 100 reviews and a solid 5-star rating. The first account I read was by Sophie M, a cubicle collector whose passion is expanding out of the office: “Vinyl toys are like crack to me. I have tons of them in my office at work, and a few scattered about my apartment.” 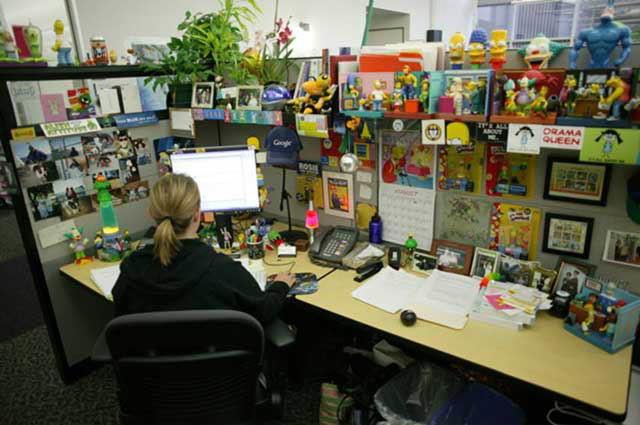 Kirby Kerr explains the importance of the cubicle collector to Rotofugi’s success: “As a business, we cater not only to those that seriously follow and collect toys, but also to a very large number of people shopping for gifts and/or just something fun for their desk at work. It’s hard to quantify, but I’d dare say that more than 50% of our sales are not serious collectors.” These folks love blind boxes.

Whereas skeptical Brenna will probably remain in the cubicle collector category, it sounds like Laura is teetering precariously on the edges of becoming a Casual Collector. 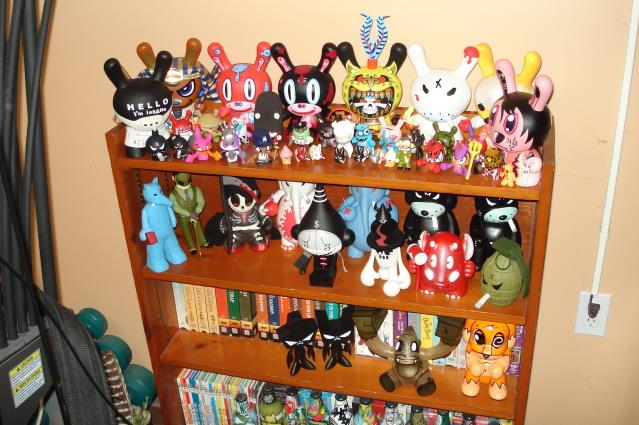 I tried to get a sense of whether casual collectors liked blind boxes, and the reaction was mixed. Those who enjoy the blind box experience all said the same thing: they like the thrill. Those who don’t enjoy the blind box marketing strategy cited: the hassle of duplicates, high cost and low quality and wanting to collect bigger and more unique pieces. Virtually all respondents had in common the fact that they’d joined the Kidrobot forums in the last year. The majority of fans who favored blind boxes had discovered Kidrobot in the last six months.

An 18-year old male with a join date of January 2009 sums up the casual fan mentality: “I’ve only been collecting for a few months, so I still feel like I need that rush of excitement.”

I went in search of longer-term fans over at Vinyl Requiem. Here, I found collectors who joined the toy forum back in 2007. An anonymous poll showed an equal percentage of fans think blind boxes are fun and annoying. A few fans find them to be a rip-off, and one no-nonsense person shrugs them off as necessity. Well, whether free-spirited or frustrated, fans in this category share the commonality of being hardcore into toys.

Serious collectors spend hundreds of dollars a month (or more) on their passion. Among them, there are variations: fans who follow particular artists (Kaws or Kathie Olivas), companies (kaiju) or series (Dunnys or Be@rbricks). They have been collecting for many years and will fly to Tokyo or spend more than your mortgage payment in pursuit of a rare piece. 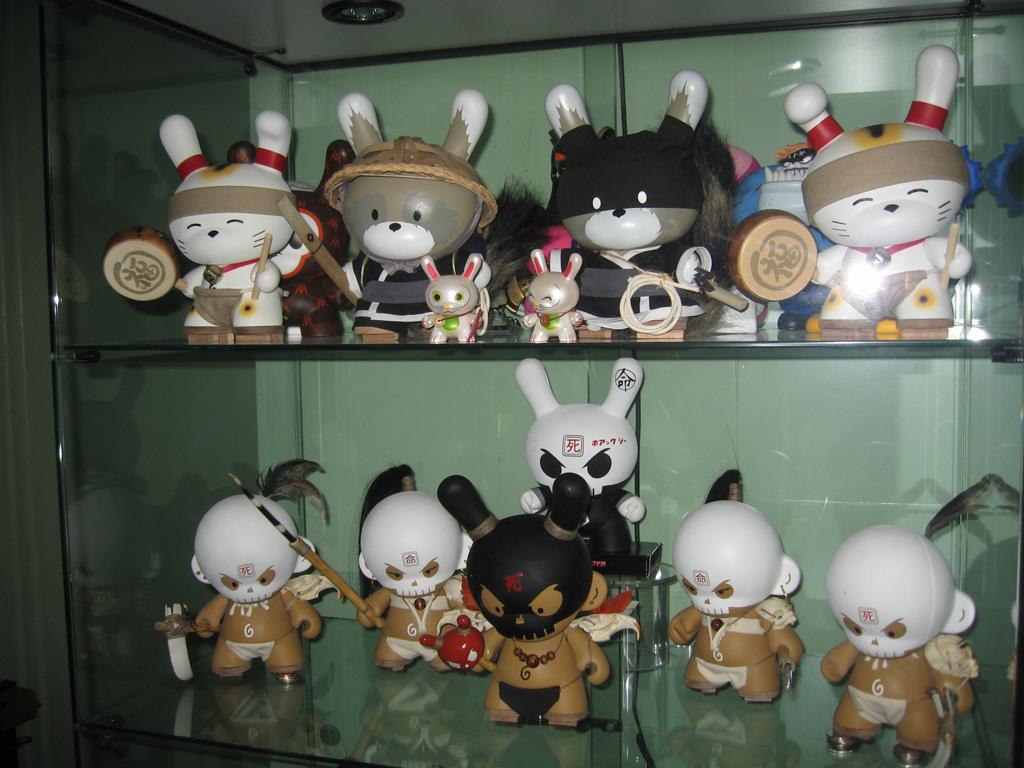 On Vinyl Requiem’s forums, collectors reminisced about the “old days” when a case was “almost a guarantee that you’d get the whole set.” They decried duplicates, but admitted dupes are good fodder for customs. Many collectors are also artists. Per Reactor88: “I like what David Horvath did with his new mini series: blind box so there’s still some randomness for the folks that enjoy the mystery and surprise, but if you want the whole set you just buy a case and you’re guaranteed to get everything.” Cris Rose summed it up like this: “By establishing a collection, gaining knowledge and becoming a little more savvy about the scene, blind boxes lost a lot of their charm.”

BUT…even among hardcore collectors, exceptions occur. I asked dedicated Kathie Olivas fans whether they would have preferred MINDstyle’s blind boxed Scavengers series to have been window boxed like MINDstyle’s Mechtorians. I thought I knew the answer, but I was surprised: some serious fans still enjoy buying blind. The reason? They trust the company and particularly the artist.  Several people said they would buy artwork sight unseen from Doktor A and Le Merde. And Chris Ryniak recently sold a $200 blind Bug Jar custom toy in 3 minutes. 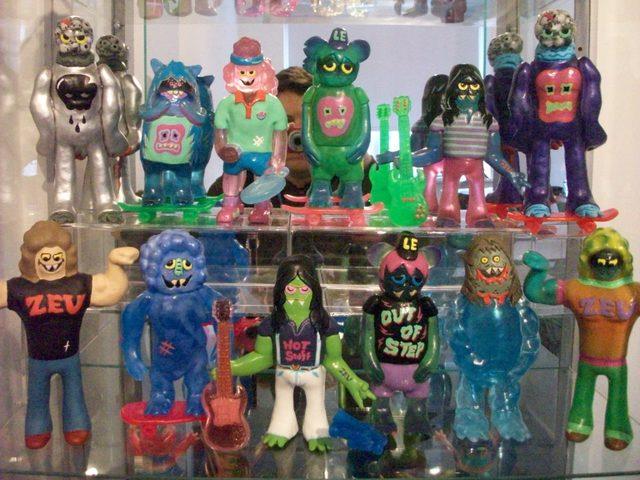 The conclusion remains inconclusive. For some fans of a particular artist, company or series, the thrill of the chase can become less appealing than cutting to the chase. For other fans, that is just part of the fun. Sales strategies that please blind box lovers and haters are both possible and profitable. Lots can be learned by just starting a conversation. Please come back tomorrow for more fun with toy retailers.

A few final “tweets” on the topic… 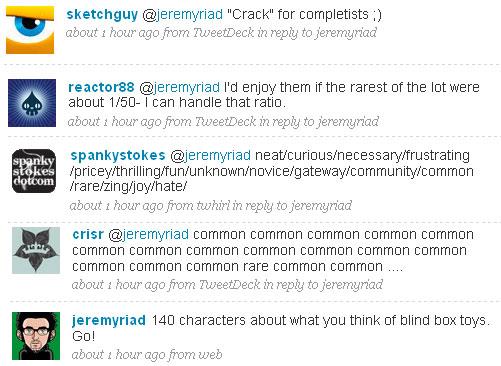 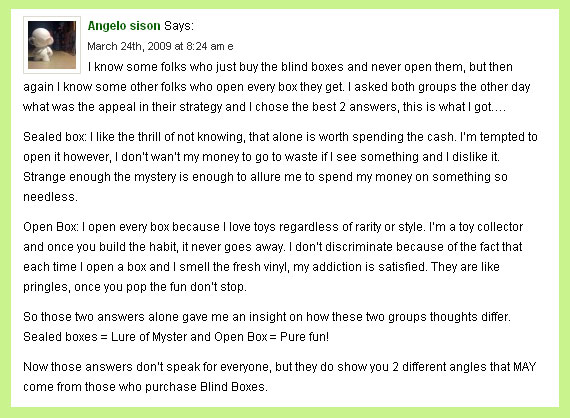 Go Back to  Part 1 – Toy Companies