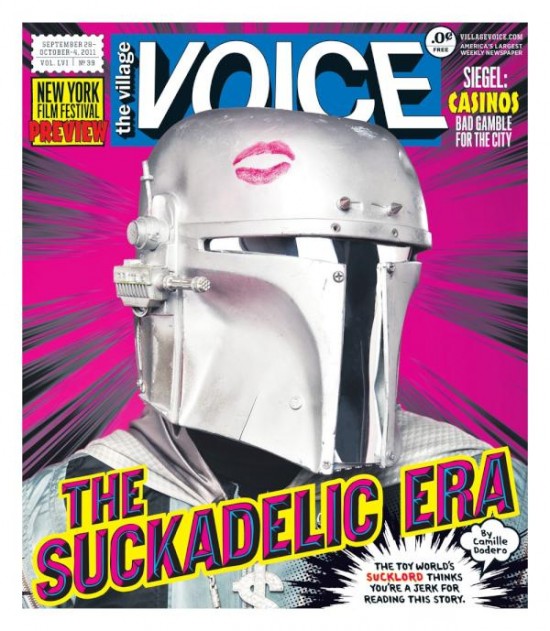 What’s black and white and sucks all over? Volume LVI #39 of New York’s venerable Village Voice newspaper when NYC wakes up and discovers it tomorrow morning. In anticipation of next month’s Work of Art season 2 premiere, VV staff writer Camille Dodero has penned a 4-page profile on The Sucklord. Dodero clearly took the time to at least try to understand the nerdy, nichy world in which we “designer toy” collectors live. (Cheesecake with Frank Kozik???) Her profile explores the man, the myth and the brand behind Suckadelic. She writes about his origins, his persona(s) and the paradox of being a toy lord in a fine art world (and/or vice versa etc. whatever).

And then there’s the Suckmom, who kind of steals the show:

If Bravo wants to do a spin-off (something like The Real Suckmoms of New York City), I’d tune in. Just saying…

Congrats to The Sucklord for what is likely only the beginning of his media saturation and also to Dodero for telling the story of one of toy art’s most colorful characters. Read The Suckadelic Era here.