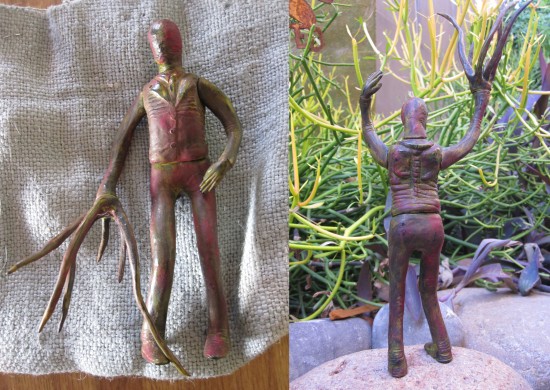 Lulubell Toy Bodega in Tucson, AZ imports some of the most interesting Japanese toys available in the US. They just recently added a piece called Slender Man by Fuei Shokai, an artist from Japan. Slender Man is a 6.5-inch articulated soft vinyl figure that avoids the trappings of “stereotypical” airbrushed kaiju toys. There’s a wee bit of Engrish in the description he wrote, so give the guy a break unless you speak perfect Japanese or something:

FUEI SHOKAI Soft Vinyl Doll Making is a brand based on an urban legend in the world. Have a strange character, and give everyone a sense of distrust and fear of the world by specializing in monster. SLENDER MAN is American urban legends, legends of the current form is a little different, and rather deep roots of the legend of precedent. In the former West SLENDER MAN is Germany’s 18th century seems Erlkönig. Erlkönig and the words are from a mistranslation of the Danish Elverkonge. Elverkonge “the king of the fairies” and that means, Erlkönig the “king of black alder” is. Erlkönig carry away was a traveler wandering in the woods to die.

SLENDER MAN is targeted to children present. The urban legend and SLENDER MAN dark woods at night, country road, the road appears in the foggy city. SLENDER MAN invisible to adults, only children can see the SLENDER MAN. Are also said to appear in a child’s dream. Ignore it and judge for creativity and runaway children are reported. Children who are targeted by The SLENDER MAN missing from the world.
Whereabouts is unknown of course.

I’m not exactly sure what this toy has to do with the former West Germany, but I’m down with fairies and trees. If you are, too, Slender Man is available now for $50 here.