This morning, pictures of an unreleased KAWS toy began appearing online. I traced the images to a site called Labiology.com, which almost exclusively sells “replicas” of KAWS toys and paintings. [The company already has its own version of the Seated Companion (Harbour City Version), so clearly they move quickly.] The five Kurfs (Kaws + Smurfs) figures shown above were added to Labiology’s shop two days ago. 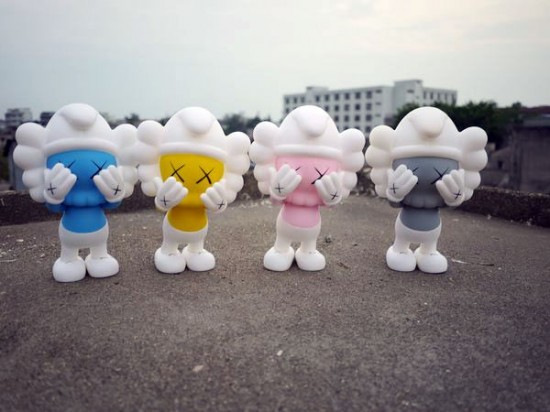 What’s especially interesting about the Kurfs, though, is that they have yet to be produced as toys by KAWS himself. KAWS has been using the Kurfs in his paintings for a number of years. 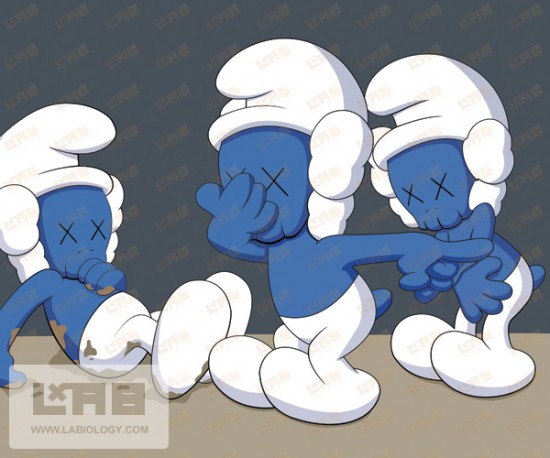 For instance, the image above is a “print replica” of a Kurfs (Laughing) painting originally done by KAWS in 2008. What’s the worth on a KAWS original? I found a pending sale for an early KAWS Kimpsons (Kaws + Simpsons) canvas in 2010 with an asking price of $30K USD. The Phillips de Pury auction house shows several final prices on KAWS pieces, including a high bid of $12,500 USD for a Running Chum triptych in 2009. Most recently, in April of this year, KAWS sold out a run of 100 Kawsbob (guess) prints at $1,200 each.

So what if you don’t have the deep pockets of someone like, say, Pharrell?

Labiology offers a 2-foot by 2-foot KAWS Chum print for $27 USD, and they even give you options for three other, larger sizes. It turns out, Labiology is big on choice. They’ve reproduced images from a dozen KAWS series including: Kurfs, Kimpsons, Family Guy and Spongebob. 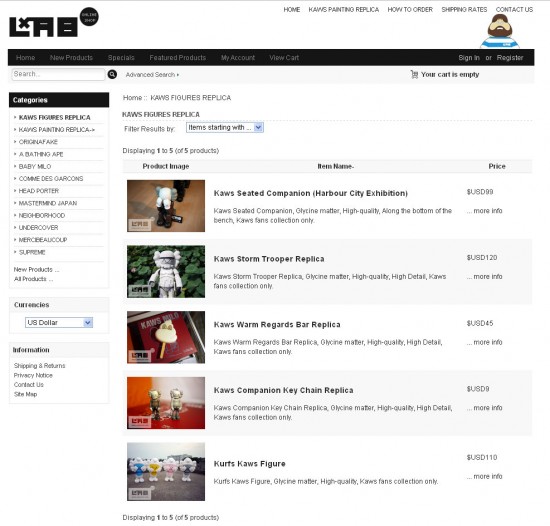 For now, they’ve only “replicated” five KAWS figures. (What, no Pushead?) This brings up a handful of questions. Is KAWS going to release an actual Kurfs toy? Has a factory rip-off got the jump on him? Is this the handiwork of a skilled “replicator“? Is this “right” or “wrong”? Why is there a James Jarvis character in the upper right hand corner? Is Jarvis next for “replication”?

It probably comes as no surprise that Labiology.com is registered to “Eddie” in the Sichuan province of China. China is ground zero for “Real Fake Art,” as documented in this series by photographer, Michael Wolf. Flavorwire reports that “China produces 70 percent of copies of famous masterpieces for export to North America and Europe. The fastest copy artists chug out 30 paintings a day in this fascinating, multimillion industry.” 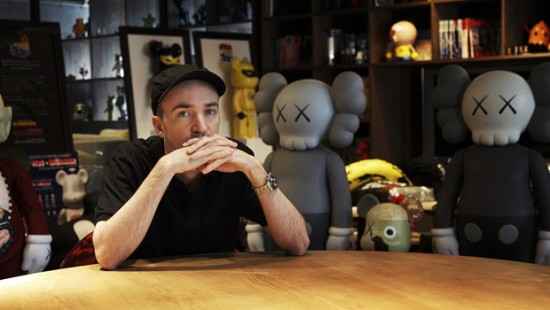 It’s safe to assume that KAWS is probably not OK with what Labiology.com is doing. While KAWS plays the game of provocative appropriation, one could argue that his Kurfs are a “reinterpretation” of Belgian cartoonist Pierre Culliford’s Smurfs. Labiology’s Kurfs, on the other hand, are a one-for-one copy, or “replica,” of KAWS’ works. But is this then just desserts for an artist who has used other artists’ characters as his signature vehicle? Isnt’ his own company called OriginalFake?

Labiology is offering 88 Kurfs in 5 colorways for $110 USD each. Shipping to California is $60. Thoughts?