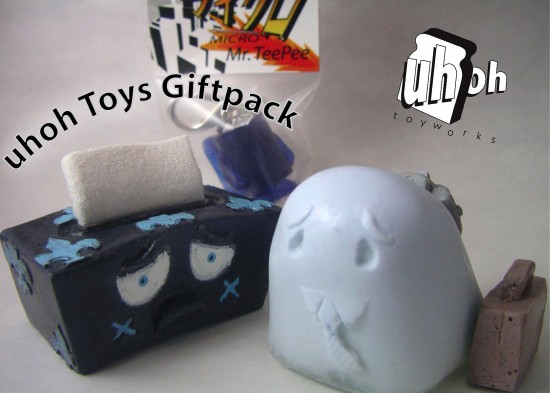 custoMONDAY might not exist without Aaron Arel’s innocent offer to donate an Uh Oh Toys Gift Pack to a ToyCyte reader. Of course, no sooner had he said that did the hamster wheel in my brain go into ultra-drive, and the idea for custoMONDAY was born. Now we’ve got artists working in resin, vinyl, plastic, clay and plush from the U.S. and beyond joining custoMONDAYs and promising you a free toy every Monday through at least the end of 2008. But that’s getting ahead. For now, let me introduce you to Minneapolis’ Aaron Arel, who operates as Uh Oh Toys. Aaron combines his unique character designs with some of the lowest prices on the planet for original art (try $2.50 for a micro-figure, $3 for G.I.D. and $8-$10 for full-size figures in hand-made packaging). You can see what’s in stock at the Uh Oh Toys Webshop. Or, try your luck at our…

To win the prize above (which includes one-off artist’s choice colorways of Micro Mr. TeePee, Gus and Barrister Ghost), simply submit your ideas for the names of Barrister Ghost’s two children. Barrister Ghost is a lawyer, who also happens to be a ghost. His children are pictured below. Aaron will choose a winner from all entries submitted by November 9th at 12 midnight PST. The winner will be announced the during the following custoMONDAY. Submit your two names (ie. Bob and Sue) in one entry per person, please. Good luck! 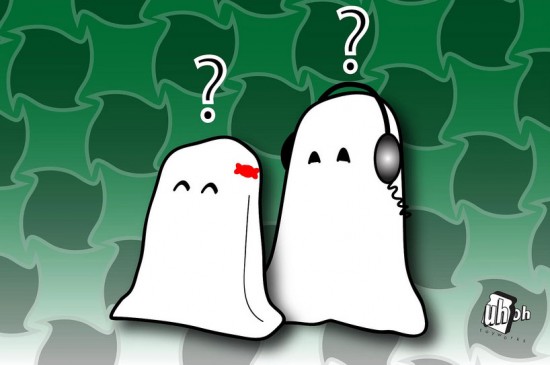 Q: Where do you live and what have you been up to until this point in your life?
A: I live in Minneapolis Minnesota. I’m in school for Graphic Design (of course) and I was a press operator for a couple years. I’ve been screen-printing for about 10 years. I ran a record label for a few years and I have tried to travel as much as possible.

Q: Why did you start making toys, resin toys, in particular?
A: I needed something creative to do, and I wondered if I could actually design a toy and produce it. I knew very little about designer toys, but I knew that they existed in some form. I guess it was just a challenge. 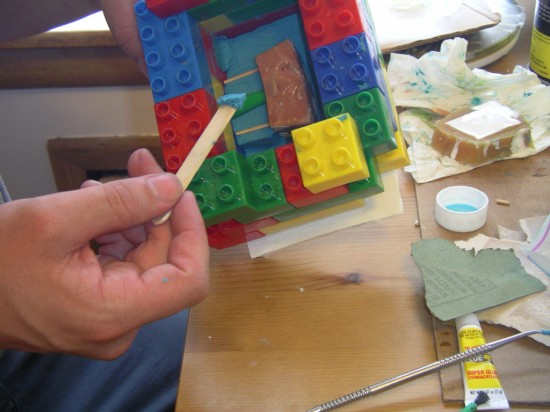 Q: What were some of the most memorable missteps in the process?
A: My very first resin pour set while I was stirring it. I’ve had a lot of air bubbles ruin things. I think I went through 5 molds for Mr. TeePee. That’s a lot of silicone and a lot of time.

Q: What were some of your best breakthroughs?
A: Mold Release Spray. I never knew I was supposed to use it every time. I think it’s the most important tool I have for casting. 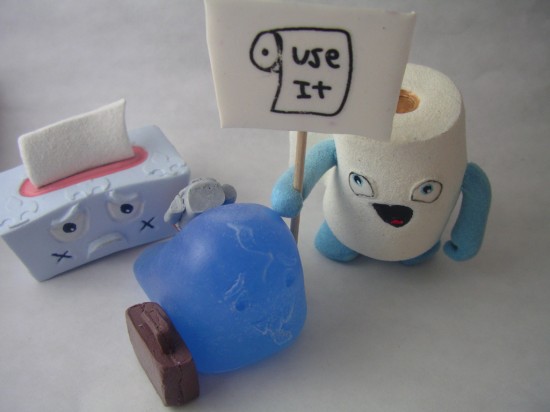 Q: You do a lot of one-offs–what is the most fun to do: flocking, G.I.D., something else?
A: Lately because of cost I’ve gotten more into making one or possibly two of a colorway. I’m such a small operation and it’s getting harder to experiment, but GID seems to be what gets the best reaction. I don’t want to overdo it though because some people don’t like it and sometimes it’s difficult to get a cool color with detail and make it GID. At least for me it’s difficult.

Q: You obviously put a lot of work into packaging each toy. Tell us about this process.
A: I’m a packaging nerd. I think the packaging is just part of the toy. You should get more than just a toy…that’s why I include whatever extras I can come up with, and why the package is important to me. I usually get an idea for a package, and I have to see it through even it’s really hard to do. I think about what relates to the toy and then come up with an idea and start building it and refine it for the limitations I have. Gus, as a window box, was the most intensive packaging I’ve done. The funny thing is that the box for Mr. TeePee caused the most problems. That release was delayed for so long because the tube, which is supposed to resemble a tissue roll, was really hard to come by.

Q: Where did you get the inspiration for characters like Mr. TeePee and Gus?
A: Mr. TeePee is based on an idea I had about PSA’s being very negative, like the “Just Say No” campaign we grew up with. I thought it would be funny to have really obvious statements, and using toilet paper just seemed funny to me. It has nothing to do with scatological humor… I just thought it was so obvious that it made me laugh. When I first started designing characters for toys, the toilet paper roll just struck me as something I could pull off. I chose Mr. TeePee for my first release to kind of set a tone for my brand. I like things a little ridiculous. I needed friends for Mr. TeePee so I thought of some other obvious things to exploit. The tissue, soap, toothpaste, there’s a garbage can character; they’re just things you should know to use.

Q: How do you see your characters fitting into the so-called urban or designer vinyl scene (angry spraycans, etc.)?
A: While I come from a graff background, I don’t really see that as an influence on what I’m doing now. I think that the genre has a specific mood that doesn’t allow me enough freedom to create characters in. I like working in the cuter end of the spectrum with simple shapes and different emotions to play with. The designer scene in general seems to be gravitating more towards resin casts for a lot of reasons such as cost, labor issues, environmental issues, time constraints, etc. I’m speaking as an outsider but that’s what I’ve been noticing. I don’t feel that I fit into the scene because I don’t come from an art background, I just enjoy creating characters. 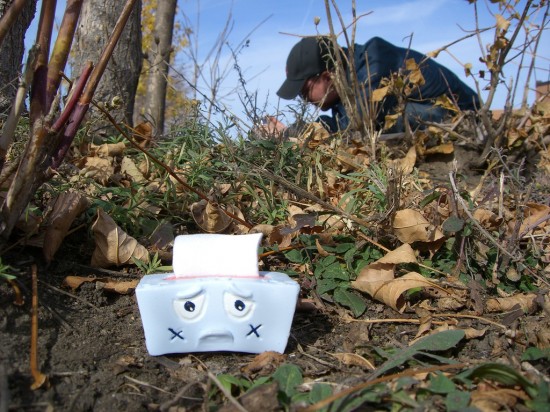 Q: Your Flickr profile is “raisinghell” but your toys are very mild-mannered and sometimes nervous. Please explain.
A: My Flickr account is from long before I made toys. I suppose I should have started a new one but I don’t like to waste Flickr’s time. The name is from a Run DMC song. Mild-mannered and nervous? Yeah I could see that. There’s always a little bit of me in my characters.

Q: What else do you do with your time? What toys do you collect?
A: I’m into building and riding bikes, I ride scooters and I like to eat. If I had money to spend I would be collecting all the Japanese stuff…Itokin Park, Yoshii, RealxHead, Secret Base, and especially Touma. 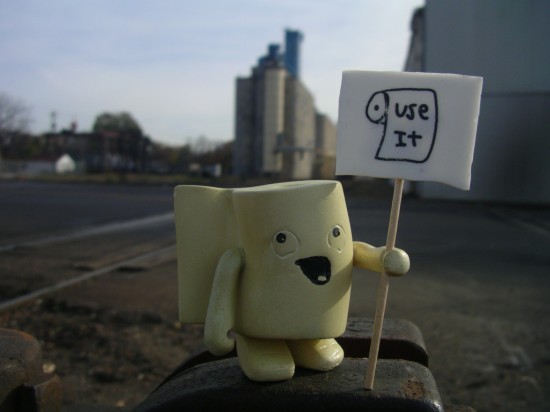 [This article was written for ToyCyte and first published on 11/3/08. I am reposting it on my own site because 1) I wrote it, 2) It’s a nice record for the artist, and 3) ToyCyte is no longer online. You can download a PDF of the story, as it originally appeared (including reader comments), by clicking HERE.]