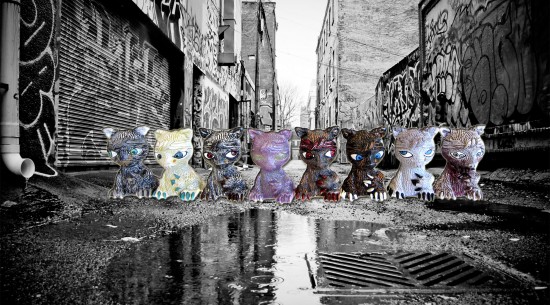 Remember Tupac Cat? Surely you must. I mean, even HuffPo acknowledged it.

This fun rendition of my Tupac Cat character is available in 75 COMPLETELY UNIQUE, DIFFERENT, HAND-PAINTED and EMBELLISHED VARIATIONS! No 2 are alike. Some are magical, some are gangster and some are downright SCARY.

Along with Leecifer and Yosiell Lorenzo, I got to check out a bunch of Jay’s Tupac Cats in downtown Oakland at the most gigantic buffet I’ve ever seen outside of Las Vegas. While not a textbook example of OCD Art, I’ve gotta shake hands (albeit with a spritz of Purell) with anybody who willingly takes on this amount of repetition. Thing is: Jay222’s cats don’t feel rushed or repeaty. It’s cool to see a whole bunch of them, but the individual cats hold their own. 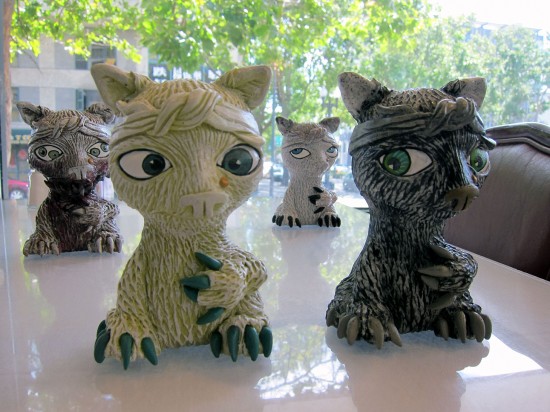 Sometimes quality can get sacrificed to quantity, but that’s not the case here: there wasn’t a bum cat in the furpile I saw. And for those of you who like cats, and perhaps also Tupac, but maybe not the gristly and gory style Jay222 is known for, rest assured there are several cats who are almost even “cute”. ZEROFRIENDS booth #5502 will be releasing a litter of Tupac Cats each day throughout SDCC til they’ve all been adopted. 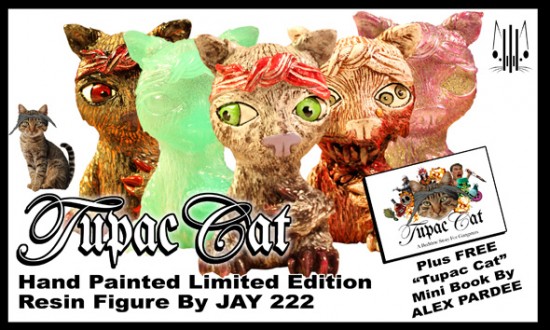 Tupac Cat is limited to 75 figures, each a 1/1 for $70. Pardee also made a mini-book detailing the adventures and escapades of Tupac Cat, which he will be giving away as a gift to folks who adopt a resin Tupac Cat. And since I can’t resist the urge to put the “gif” in gift, here’s a gift from me to you.