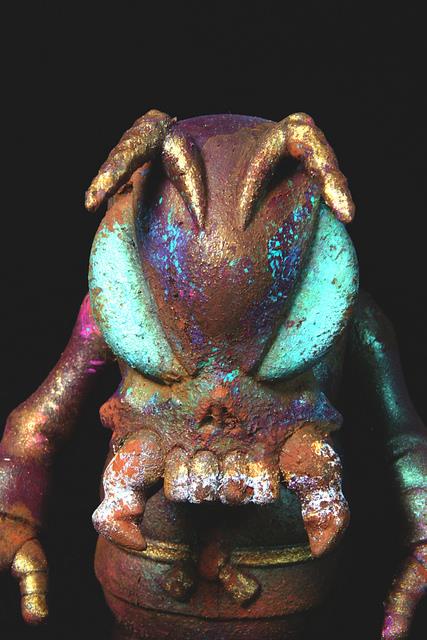 An interesting conversation popped up over the last several days on the Skullbrain forum. The crux of the debate centered on Dril One‘s choice to customize a Secret Base Skull Bee in his signature rusted out style. Dril picked up the toy in the $10 bin at Super7, and painted over it because it he likes bees, it was cheap and he was trying a bit of a new technique. Also: because he COULD.

Dril One’s point-of-view can be summed up with this quote:

I do real well selling these. Honestly, like Brian Flynn says, these are all toys. And I paint toys, it doesnt matter if it is A funky 6 eyed purple Hawian Zag Nag Bemon super rare diamond encrusted 6 karat imitation gold kaws breathed on toy.

The opposing viewpoints occupy two different camps: the purists who think this toy should be kept in the form Hiddy and co. intended it to be and the people who think a toy customizer should relate the new style in some way to the original piece.

I can see where the purists are coming from, but this is life in toyland. You can no more protect a billboard from being bombed than you can a toy from being customized. And in this specific case, the toy had been kicking around at Super7 and eventually farmed out to the $10 bin. Fair game, it would seem.

However, I think there’s merit in the following argument by Parka on SB:

Why pick a Skull Bee then for this ‘design’? To me it looks like you don’t give a shite what toy you’re painting, no thought has gone into the size, shape, positioning or even the history or heritage of the Bee or Secret Base. If you’re going to just use the same idea on everything it makes the subject redundant.

I must be mellowing in my old age because I don’t have a dog in this game. I can pretty equally see both sides. Dril One’s technique looks cool on this piece. And yet it has nothing to do with the piece. I will probably personally always gravitate to a custom that has style and substance over technique alone. But there are no shortage of people requesting customs from Dril One. Yours truly even has a rusted out O-No Sushi. The idea of decaying fresh fish amused me. There are exceptions to every rule.

UPDATE: Check out another opinion on this at Daniel Goffin’s excellent Reduced Figuration blog.

UPDATE 2: And another POV from Fplus here.