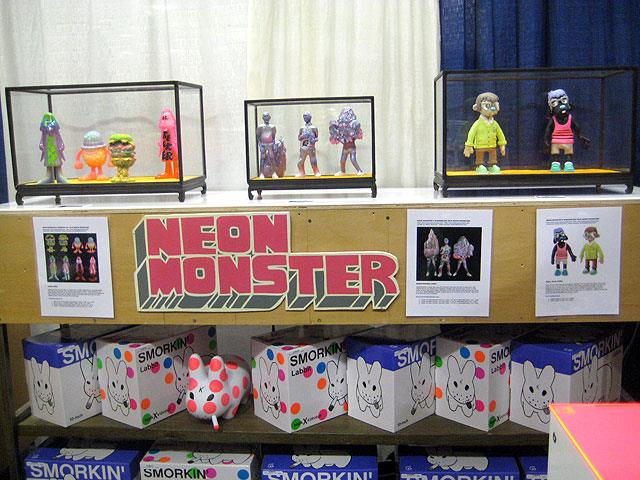 The Wondercon Resin Showcase intrigued and allured visitors to Neon Monster’s booth at the convention from April 2nd to April 4th. It’s safe to say we introduced a lot of new people to the concept of resin toys as art. Thanks to everybody who came through to support the show, those of you who kept me on my toes by asking questions, the bloggers who wrote nice things and especially you wonderful people who took a little piece of the WRS home with you. This was my first official “act of curation,” and I’m stoked to have gotten to work with such a great group of artists. 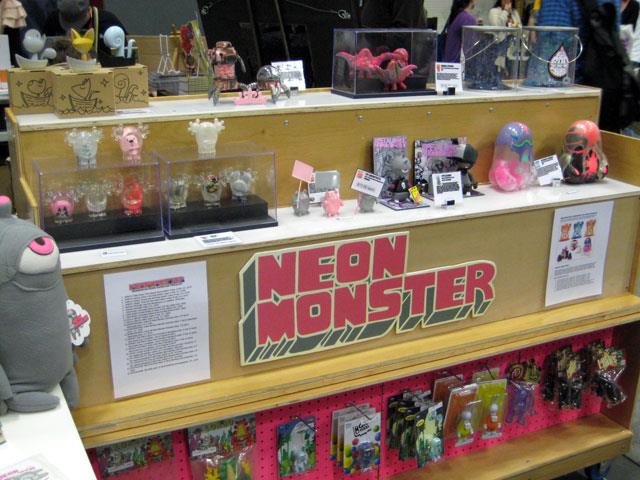 Most of the work from this showcase has been sold. Here are a few snapshots and words I wrote. 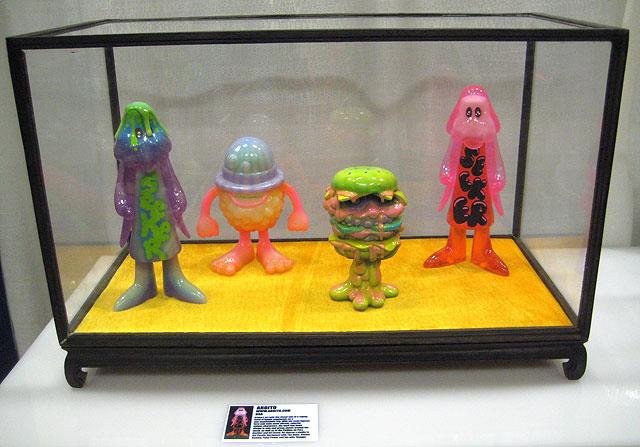 Arbito’s art tells the visual tale of a ragtag band of hippie vagabonds on a pop-psychedelic trip. With his resin figures, form and style meet vibrant, colorful, unique characters. His work has been shown in solo and group shows around the world, as well as at the Phillips de Pury Auction and Art Basel. He shares a studio in the Pacific Northwest with The Hobo, Seeker, Sammy, Patty Power and his wife, Snaggs. 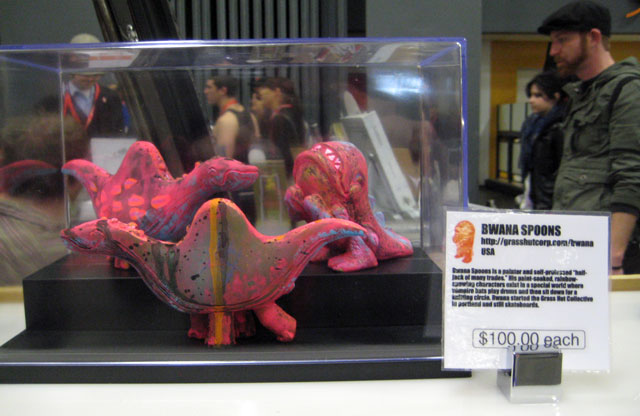 Bwana Spoons is a painter and self-professed “half Jack of many trades.” His paint-soaked, rainbow-spewing characters exist in a special world where vampire bats play drums and then sit down for a knitting circle. Bwana started the Grass Hut Collective in Portland, and he still skateboards. 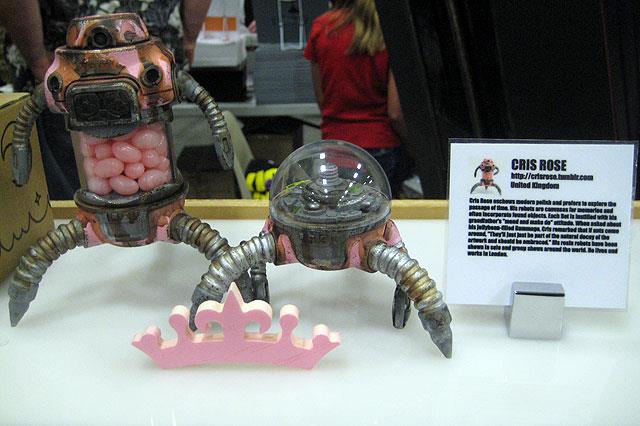 Cris Rose eschews modern polish and prefers to explore the passage of time. His robots are canvases for memories and often incorporate found objects. Each Bot is instilled with his grandfather’s “mend and make do” attitude. When asked about his jellybean-filled Rummage, Cris remarked that if ants come around, “They’ll just just be part of the natural decay of the artwork and should be embraced.” His resin robots have been shown in solo and group shows around the world. He lives and works in London. 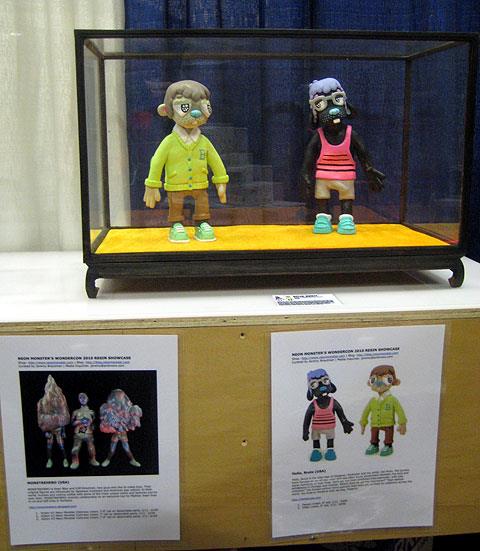 Hello, Brute is the alter-ego of designer, illustrator and toy artist, Jon Knox. His current work focuses on an all-boy crew who are often stuck somewhere between the best and worst moments of their lives. Jon’s art has been exhibited internationally, with solo exhibitions in Chicago and Seattle. Where does he get his inspiration? “High fashion cartoons!” His limited-edition hand-painted resin toys are coveted by collectors across the world. Jon lives in Portland with his dog, Roberto. 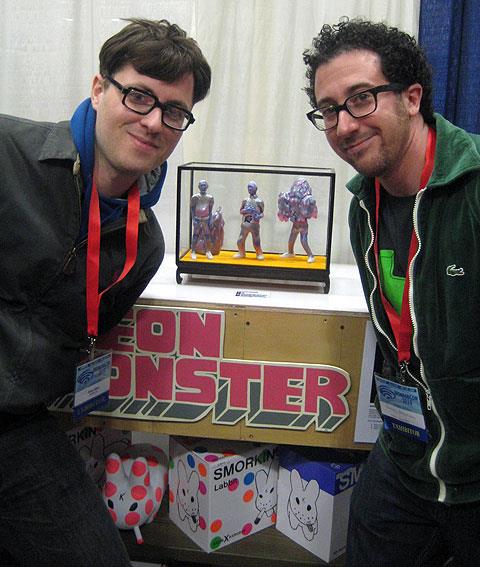 MONSTREHERO is Sean Blay and Cliff Kirschner, two guys who like to make toys. Their original figures are influenced by Japanese monsters and American pop culture. In their world, hunters and victims collide with some of the most unique colors and textures you’ve ever seen. MONSTREHERO recently collaborated on an exclusive toy for Mishka. Sean lives in LA and Cliff lives in Portland. [Note: Photo above is of Sean and the show’s curator, Jeremy Brautman, aka me. Cliff has less fro and more beard.] 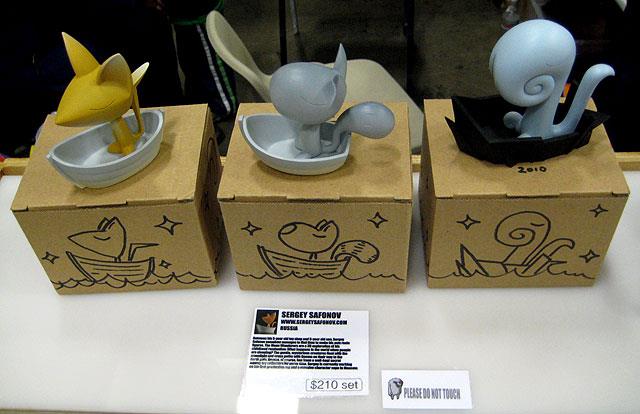 Between his 5-year old toy shop and 5-year old son, Sergey Safonov somehow manages to find time to make his own resin figures. The Moon Wanderers are a 3D exploration of his childhood rumination: What happens in the world when people are sleeping? The gentle, mysterious creatures float with the moonlight and cross paths with Gooma on their way to the North pole. Gooma, of course, has been a well-kept secret among toy collectors for some time. Sergey is currently working on his first production toy and a massive character expo in Moscow. 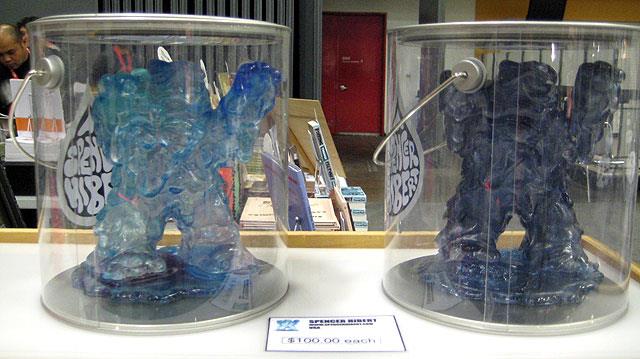 Spencer Hibert likes to paint with plastic. His work blurs the boundaries between high art blown glass sculptures and lowbrow soft vinyl toys. An innovator in an already highly original medium, Spencer rotocasts resin, rendering the toys uniquely lightweight. He recently opened his own gallery, SOYAL, in the Arizona desert where he lives and works.

Tan-Ki is a French graphic designer whose name (in Celtic) translates to Fire Warrior. He created the KiToy platform as an experiment in toy design and manufacturing. Along the way, he began placing collectible vinyl toys inside the resin. This resulted in the KiClear Inclusions series. His figures have been shown internationally. Tan-Ki lives in Brest with his girlfriend and two sons. 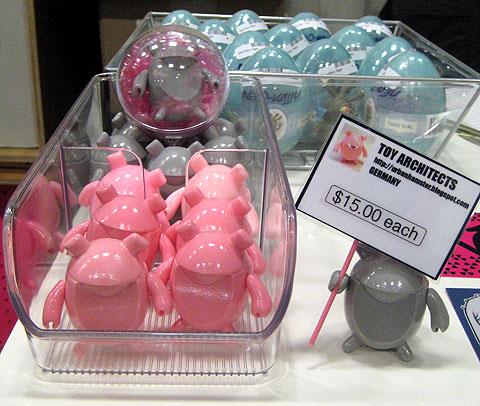 Mathias Bax lives in Edermunde, Germany where he works as an architect and a designer. In an effort to fuse the spirit of urban vinyl and DIY toys with architectural simplicity (and have the result also be appropriate for his young son), Cavy the Resin Hamster was born. Since the Hamster Launch earlier this year, stores around the world have been jockeying to carry these whimsical toys. Wondercon 2010 is Mathias’ first show. 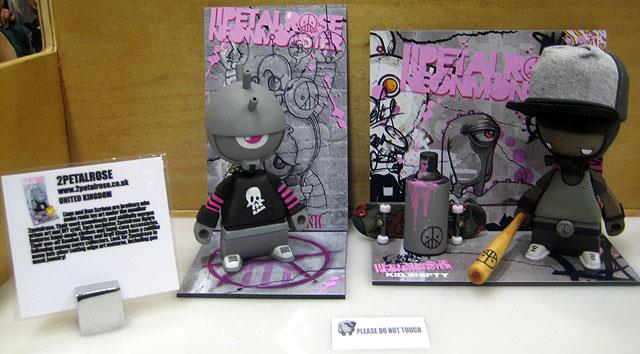 Liam and Ben Scriven are brothers who make resin toy art under the moniker 2petalrose. Their work seamlessly and skillfully merges urban art and DIY craft. Each exclusive 2petalrose figure features hand-made clothes and hand-case accessories. Their one-off Kombat Kings and Graff Kings have a cultlike following among savvy collectors. Look for 2petalrose to move into other cutting edge art ventures, including gas mask jewelry!