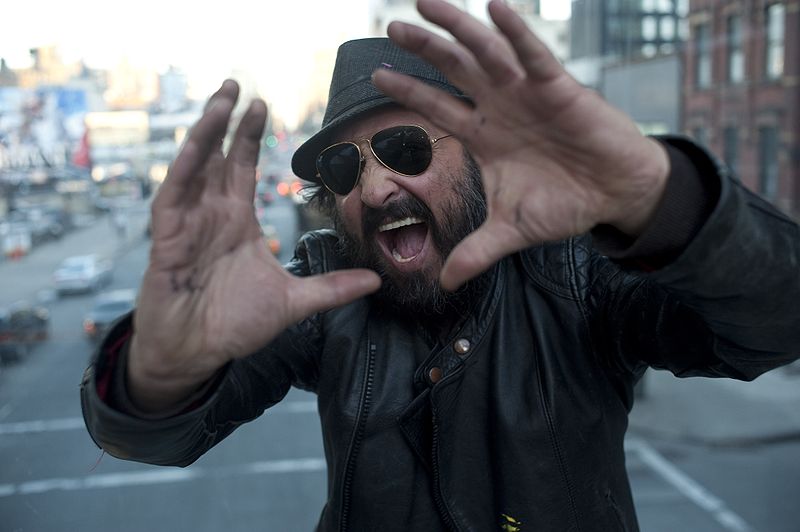 By now, everybody already knows who Banksy is, or, more to the point, we don’t. Yet the wide world outside the street art niche continues to talk about him, almost every minute, in fact. Following an exciting weekend which may or may not have given San Francisco a new half dozen original Banksys, the Internet is flush with reviews of Banksy’s Exit Through The Gift Shop. This is a film-within-a-film starring Thierry Guetta, a French retailer of vintage clothing living in LA. Thanks to nationalistic ties to Space Invader and a serendipitous Kinkos encounter with a young Shepard Fairey, Thierry became the defacto videographer for the world’s hippest defacers.

Exit provides a very Hollywood explanation for why Thierry has a camcorder permanently affixed to his hand, but we get only a mere fraction of what I imagine to be really interesting “behind-the-scenes” footage of street art in progress. This is because, Thierry (or someone), at the urging of Fairey and Banksy, compiled years of street art videography into an unwatchable epileptic MTV-style documentary. Seeing this colossal fail, Banksy stepped in and turned the camera on Thierry. The rest of the film chronicles the unlikely pairing of Banksy and Thierry, the reversal of their relationship and Thierry’s (rapidfire) turn into Mr. Brainwash. 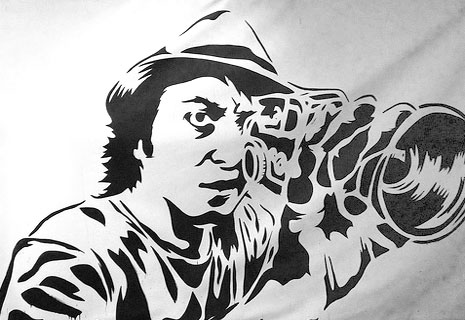 Mr. Brainwash’s 2008 Life is Beautiful show was his answer to Banksy’s 2006 show, Barely Legal. But, in Banksy’s words, MBW had turned the culture blender “up to 11″, and instead of an elephant in the room, we had a doped up, broken-legged Frenchman rolling through the re-purposed CBS studios on a scooter. Andy Warhol would have loved Thierry Guetta. But does anybody else? The art show cleared upwards of a million dollars, and then the hype machine from which he’d arisen pretty much stopped. Once the hype was gone, so was MBW. In truth, I hadn’t given MBW a single thought between Life and Exit (fitting titular book ends, indeed). Then, suddenly, last Sunday, while San Francisco was abuzz with Banksy, Mr. Brainwash showed up at an LA farmer’s market. I quickly texted Buff Monster asking “whether MBW was real or manufactured by Banksy.” Buff, who also appears in Exit, responded, “Neither, he’s as the movie portrays him.” Helpful, not! 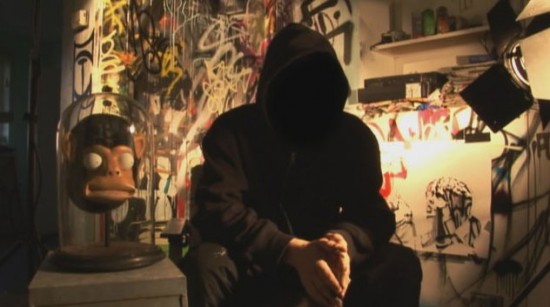 After seeing the movie,  I went back to the toy blog at which I was EIC during 2008-2009 to see what I’d written about Mr. Brainwash. When I penned a brief post consisting mainly of quotes on June 13th of ‘08, I remember thinking: “I don’t really know who this is, but I feel that I’m supposed to.” Reflecting on the film, I now see how the MBW machine cleverly manufactured that feeling. But back in ‘08, 7 days later, snark had already crept into my writing: “If you’re in LA this weekend and you have a philosophical issue with Mr. Brainwash’s shindig, check out the new documentary Dirty Hands.” And 6 days after that: “London’s Cans Festival occurred at the beginning of May and people are still talking about it. Compare that to the dying-out buzz over LA’s Mr. Brainwash show, which is starting to turn negative amidst accusations of appropriation.” Street art was not a heavily covered topic on ToyCyte, and that was the last I had to say about MBW until now. 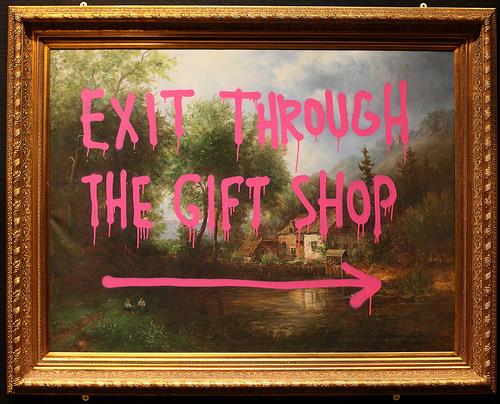 The question people are asking (or one of them) is “Does Mr. Brainwash exist?” I say: yes and no. I imagine that, like Clark Kent, Thierry Guetta stepped into a phone booth (one like this), and came out the other side as MBW. Nobody imagines that Thierry executed all of the pieces in the Life show, and there’s already a Factory precedent for assembly-line work in the art scene that doesn’t require “artist” and “silkscreener” to be as one. Where the Exit plot starts to go all LOST is when you ponder well, who is really behind all this? If you take the film as it presents itself, it’s Thierry aka MBW. But there’s a flash sideways theory that suggests it’s Banksy (and possibly also Fairey) who pulled the puppet strings. Then the smoke monster comes around and leaves you wondering if Banksy and MBW are one and the same. After all, Thierry told the Wall Street Journal: “Maybe I am Banksy. Maybe I’m not.” And Fairey is quoted in the same article as saying, of MBW, “He is 100% sincere.” 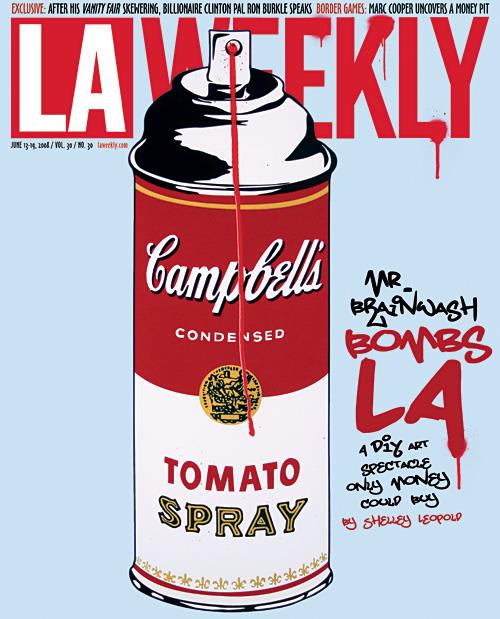 I almost don’t see how answering that question is relevant or what it necessarily changes. Let’s pretend I was one of the people who bought a MBW silkscreen for $30K. If MBW is “as the movie portrays him,” then I’d have gotten exactly what I purchased, no? Now, if MBW was an elaborate prank orchestrated by the merry Bankster, my $30K MBW silkscreen wouldn’t really change value. I don’t claim expertise in understanding the going-ons of much of the high art world, but if you pay $30K for a silkscreen directed by an artist who you hadn’t heard of a few months ago, you are either A) straight up nuts or B) paying to be part of an experience. In this case, it’s possible that the experience includes being punked. If, indeed, Banksy punked you, congratulations you now own part of a Banksy prank. You and all of your moneyed friends can laugh over fancy cocktails about how artists are of a different ilk and how silly the art world is.

As for me, I’m OK with the $10 I spent to go see this film. I’m cool if that money goes to Banksy or to Mr. Brainwash (who has a wife and a couple of kids he seemed to always be taking off on).  I’d have liked to see more of the original street artist (Swoon, David Choe, etc.) footage Thierry shot (though my friends tell me this is beyond boring), and perhaps rather than interviewing a disguised (possible) Banksy, we could have had, oh I don’t know, occasional graffiti’d quote cards like they did in silent movies. It’s an entertaining flick, and really, who doesn’t love a good gift shop? Click here for a list of theaters showing Exit Through the Gift Shop in your city.