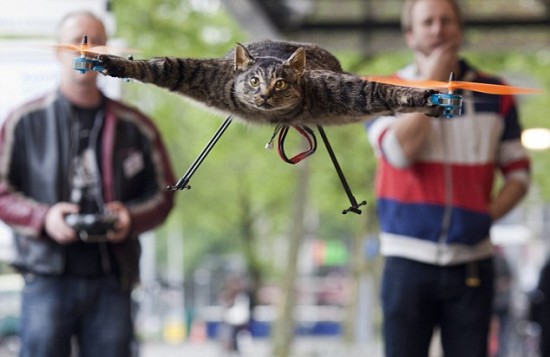 Ever wonder what happened to Flying Cat? They were one of the first manufacturers of what we call toy art today.  From the early-mid 2000s, Flying Cat was responsible for producing vinyl and plush toy art by Nathan Jurevicius, Jon Burgerman and TADO, among others. However, this post is not about that Flying Cat. It’s about this one. 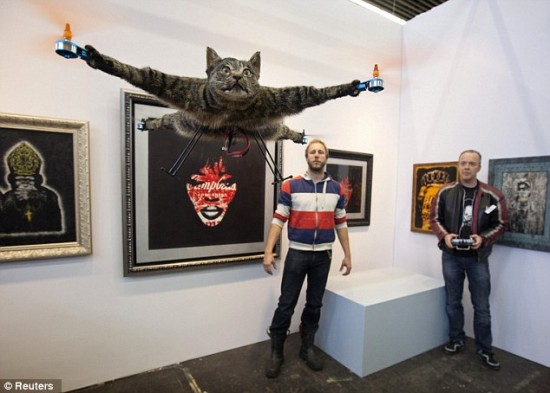 When Dutch artist Bart Jansen lost his cat to vehicular cat-slaughter, he decided to taxidermy the cat. The cat was named Orville, after Orville Wright, which is what inspired Jansen to turn his taxidermied cat into a flying helicopter. Radio control helicopter flyer, Arjen Beltman, built a specially-designed flying mechanism to attach to Orville the cat. And just like they do in The Netherlands, like that, the cat got high. 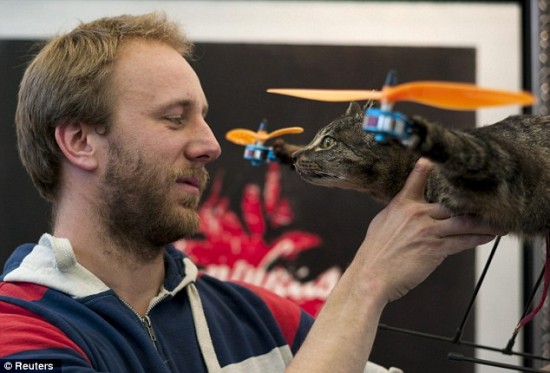 The end result, named the Orvillecopter, is now on show at the Kunstrai art festival in Amsterdam where visitors can watch Orville flying for themselves.  Jansen said the Orvillecopter is ‘half cat, half machine’, and part of a visual art project to pay tribute to his cat Orville.

Jansen, part of the art cooperative Generaal Pardon, said: ‘After a period of mourning he received his propellers posthumously.’ He added that Orville will soon be ‘flying with the birds’ stating: ‘Oh how he loved birds. He will receive more powerful engines and larger props for his birthday. So this hopping will soon change into steady flight.’

I have mixed feelings about this. I recently lost a cat myself, but there’s something undignified about turning a cat into an RC helicopter. The idea and inspiration are there, but in practice, watching the cat crash land is kinda cringe-inducing. Of the approximately 8,000 YouTubers who’ve cast their (as usual, particularly harsh and misspelled) opinions, it’s an almost equal split between “like” and “dislike”. Click through to watch the video and judge for yourself.