Toy Art Gallery in LA presents its biggest show yet. Tomorrow night, the Melrose Avenue showroom will be taken over by TAG’s life-size fiberglass editions. Gino Joukar, mega-collector and founder of TAG, writes:

We at TAG feel that the Life-size Fiberglass Figures represent the next stage in art toy production, as they offer the discerning toy collector a new way to make a bold and exciting statement of their collecting styles and preferences. The TAG Lifesize Figure Series also brings affordability to the historically prohibitive fiberglass sculpture market with a wide range of choices for various budgets.

The exhibit opens Saturday, January 12th from 7-10PM and runs through January 26th. The Toy Giants are available for adoption here.

Look at the amazing details in Francesco de Molfetta’s Michelangelo and T9G’s Rangeas (above) and Paul Kaiju’s Boss Carrion (below)! Even if you share Sucklord’s sentiment that Being Tall is Wack, you can’t argue with the sheer surface area here. These Toy Giants are spectacular beasts. 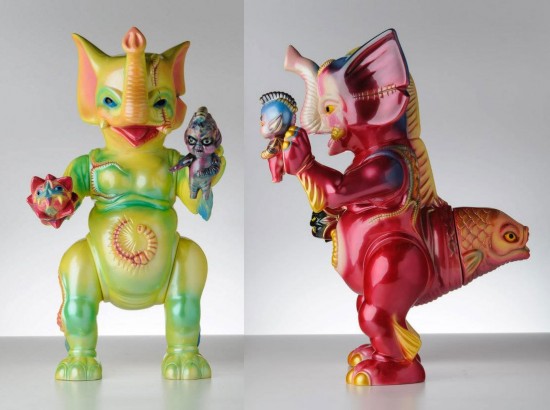 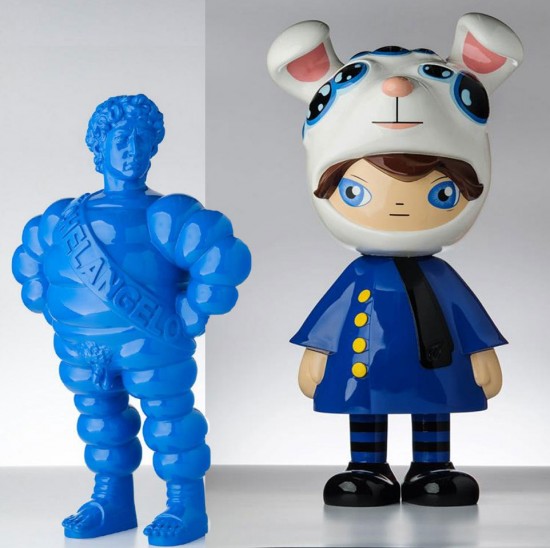 JB: When and why did you decide to make these “giant toys”?

Gino Joukar: I’ve been making life-sized figures for the past 4-5 years, but we really started doing them seriously a couple years ago. [Scaling up] is one of the most beautiful ways to produce a figure while capturing all the details and complexity of the character. Fiberglass editions are also one of my favorite mediums to collect. I wanted more figures for my own collection, so I decided to step up and fill the void by producing them and make it one of TAG’s specialties. 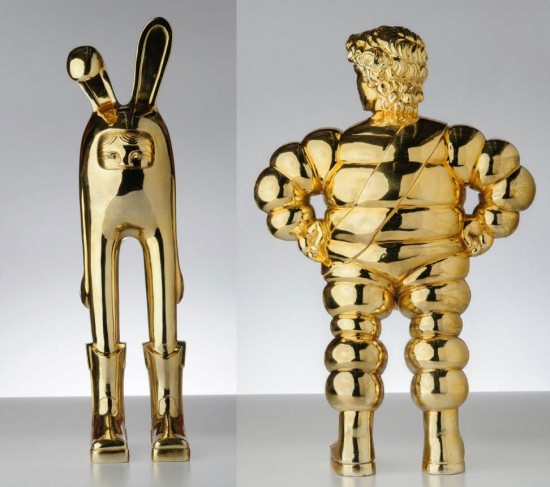 How did you select which artists to work with on this project?

Gino Joukar: Artists are selected based on whether they have a unique figure that I believe would work well in this medium. I work with a wide variety of artists from various disciplines and genres, but the most important factor for me is being an original. 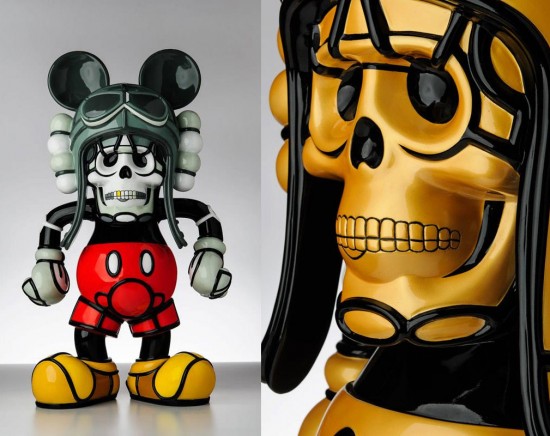 Could you tell us a bit about the process for making the Toy Giants?

Gino Joukar: It starts with an idea or a drawing by the artist. Then we have our sculptor create an original prototype for it, making any necessary changes or revisions required by the artist to get their approval. Next we have it cast in fiberglass and painted or plated. Depending on the project and scale of the figure, one project takes approximately 6 months to complete. 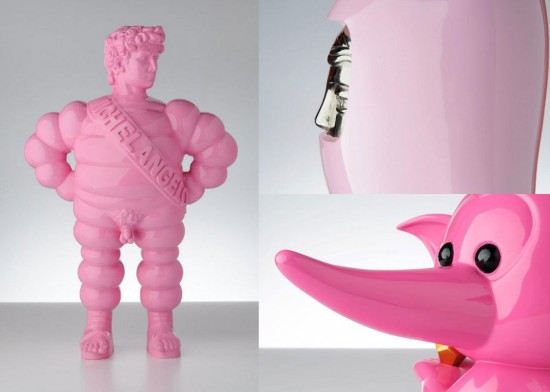 Attack of the Pink Toy Giants!

How did it feel to see the finished works for the first time?

Gino Joukar: It’s just incredible to see your favorite vinyl figures produced in a much larger format: there’s no sight like it. The artists are always blown away by the detail, quality and scale of their figures, and it’s extremely gratifying to see a figure go from concept to completion.

Will there be more Toy Giants???

Gino Joukar: Oh for sure. We’re just getting started, and we’ve got a lot of projects that we’ll be unveiling in 2013. We’ll be unveiling a life-size Blobpus figure at our upcoming group show on February 2nd with Paul Kaiju, Yamomark & Hanawa. Much more will be revealed later on in the year! 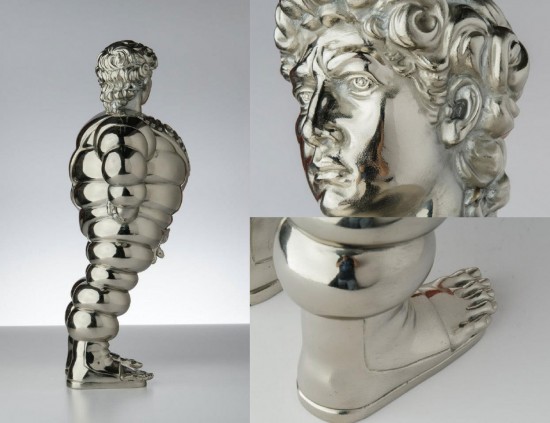 Francesco de Molfetta: I tend to always make different scales of my sculpts–from the very smallest toy format (which can be seen as “maquettes” for proportions and finishes) to the larger and sometimes life-size ones. In the case of the Michelangelo, the larger format has much more detail in the face, feet and genitals. Being so inspired by Michelangelo’s David, detailing my own sculpture was very VERY important–especially the parts “stolen” from the classical statue. I had to do precise photo research to examine the details of David. There’s way more to see in the larger scale size of the Toy Giants Michelangelo, and this definitely enhances the effect of the figure!

Francesco de Molfetta: When I saw the finished result, I was amazed! Don’t you agree? Who wouldn’t love one proudly standing on his desk or beside the sofa in the living room? I think it’s a truly great piece, and so effective in its simplicity and monochrome. I love it, I imagine a massive one–like 10+ meters (~ 33 feet) tall somewhere one day…! 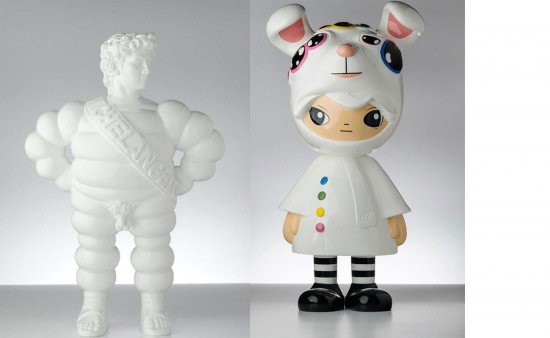 Michelangelo by Francesco de Molfetta & Benny the Dreamer by Okedoki

Francesco de Molfetta: That’s an interesting question! Well unveiling his Italian origins, and hence his Latin lover charisma, I guess he would have a row of of picks!! But if I have to choose, I guess he would set off with Okedoki’s giant Benny the Dreamer. He really loves her colors (because he doesn’t have that variety on him) and also because she comes from the far North (coat and scarf speak up to this), and being a Mediterranean kind of guy, he prefers exotic, far off ladies! 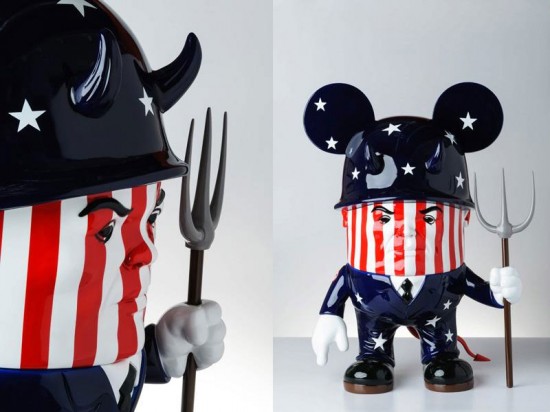 Bob Dob: I gave some turnaround sketches for the character which were used to build the sculpt. I then received photos from him that I would revise in Photoshop. Once that was finalized, I gave him some colorways and he painted them up and sent photos for approval. Pretty painless and a lot of fun.

Bob Dob: I was really excited. They came out better then expected. Gino did a great job organizing the whole thing. 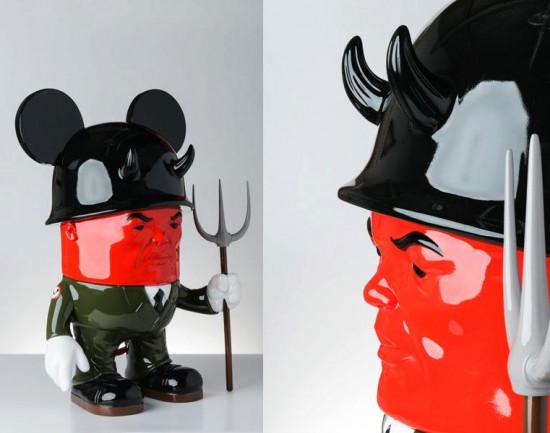 Bob Dob: He would go with all of them and rage til all the booze was gone, and then escape to another island and drink all their booze. 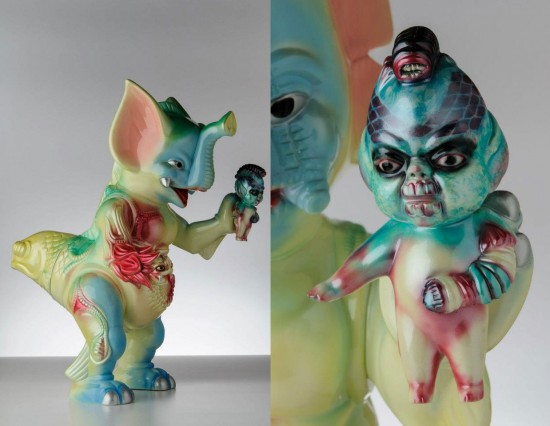 Paul Kaiju: Overall, those guys are pros at what they do. I made just a few adjustments. The whole process is amazing. I was absolutely floored with the final product.

Paul Kaiju: The first time I saw it in emails, I was impressed. Upon receiving a blank to paint for my Paulyvinyl show, and acctually assembling it, what a blast that was! It’s the pose-ability they engineered into mine that makes it even more fun. Gotta love the magnetic baby too! I think I carried him around for a week. 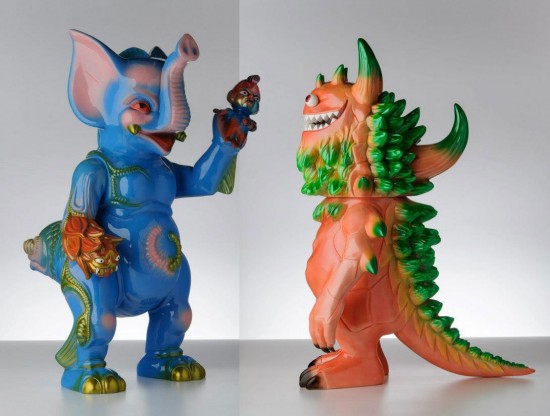 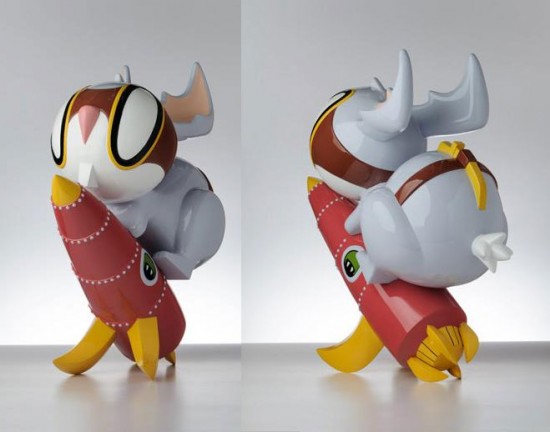 Nathan Hamill: Painless. It was a joy. The sculptor simply worked from the vinyl we sent him. I didn’t have to give any notes. It was perfect. George Gaspar, who sculpted the original Bellicose Bunny, couldn’t see anything that differed from what he’d done. It’s incredible.

The first half or the second? The first color way, the Prometheus edition, was scheduled to arrive in time for the Bellicosity custom show, last year. On the day of the show, it got stuck in customs in Alaska. But half the piece ended up making it here in time. It was the rocket half; the bunny was separated from his ride. Apparently the bunny was suspect, but they let through what ostensibly looks like a fucking nuclear warhead. [Editor’s note: HA!] 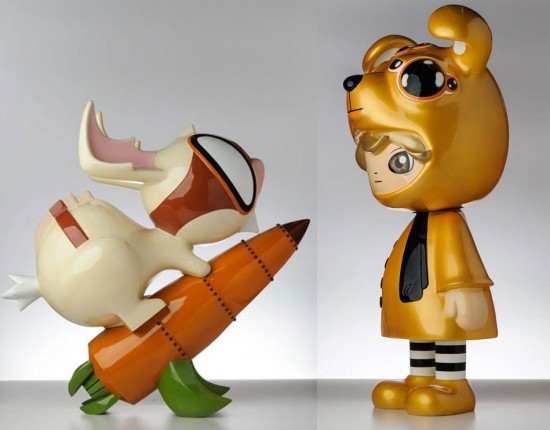 Nathan Hamill: Benny the Dreamer. ‘Cause of the bunny thing. And you know…gay stuff.

Well folks, we have a Toy Giants match! 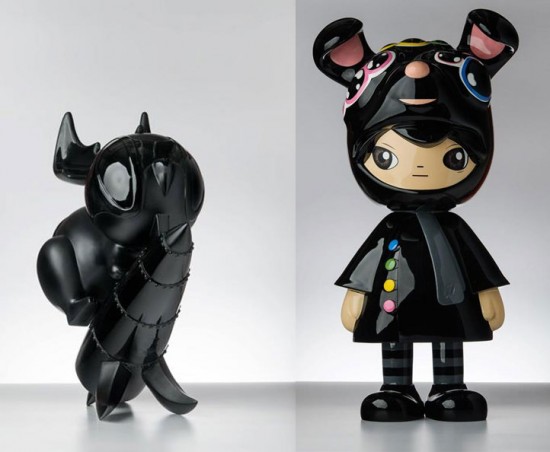 JB: If your Toy Giant decided to elope with another artist’s Toy Giant and go live on a secluded island, which Toy Giant would he/she/it pick and why?

Okedoki: Bellicose Bunny, because what else would two bunnies do…?

Queue the return of the musical pairings! 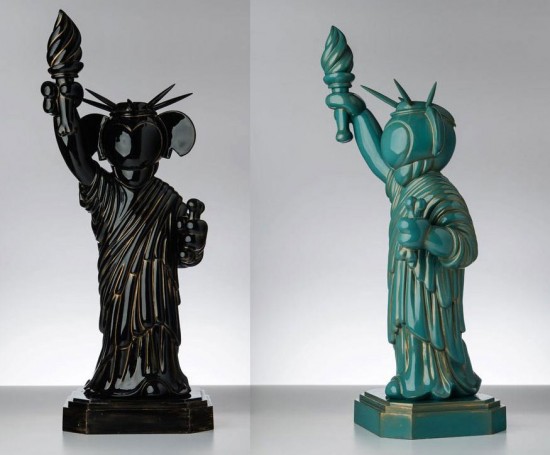 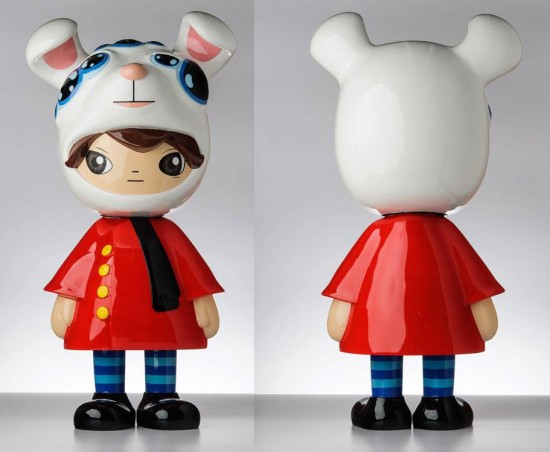 Benny the Dreamer for Toy Giants by Okedoki x TAG 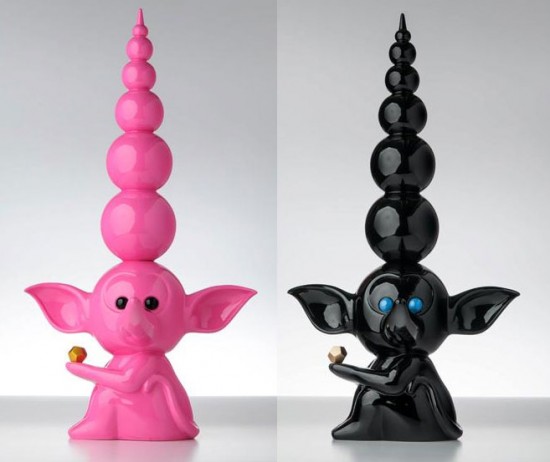 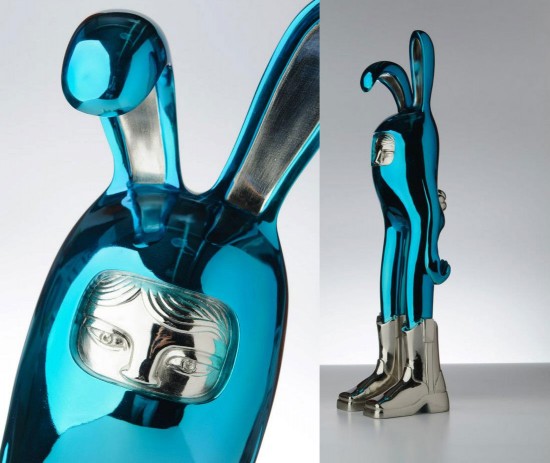 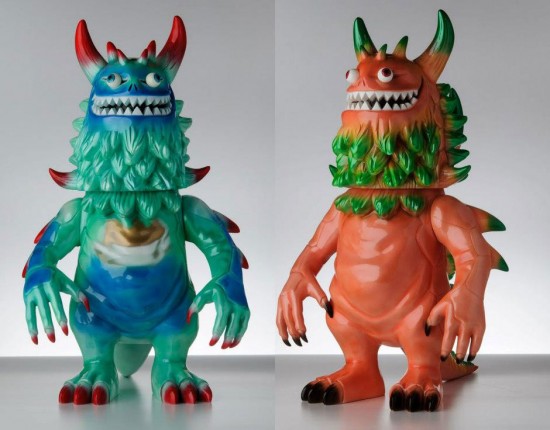