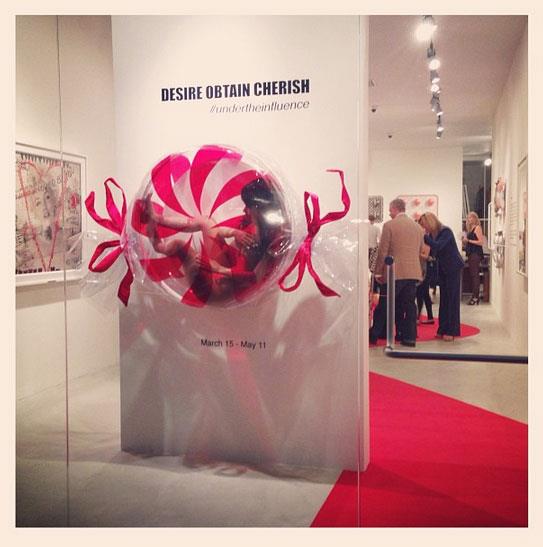 Desire Obtain Cherish is the nom de guerre of Jonathan Paul, a graduate of Parson’s School of Design who relocated to Los Angeles to bomb the streets and give candy to (big) babies. Tonight, Friday, March 15th, Desire Obtain Cherish opens his first solo (gallery) show at KM Fine Arts in LA. It’s called #undertheinfluence, and when you combine the titular hashtag with the topics of designer drugs, giant candy and celebrity death, is there any other city in the world more suited for this art than Los Angeles? 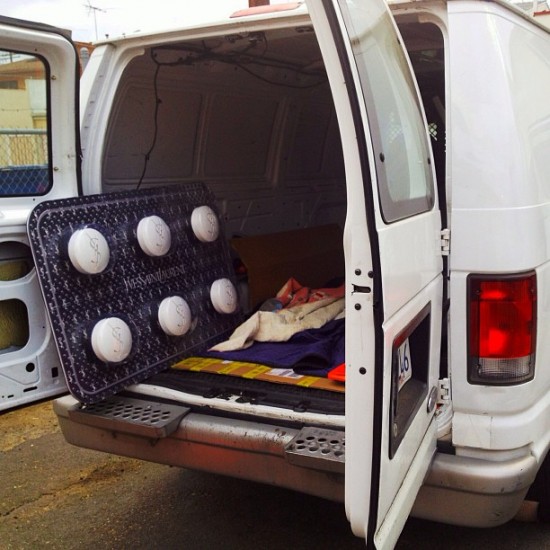 Let’s back up a bit. Uh oh, I hit something. It’s just a 42-inch 6-pack of cast resin designer drugs branded with Yves Saint Laurent being unloaded from an unmarked white van on the street. Which kinda makes it street art (hey haters). 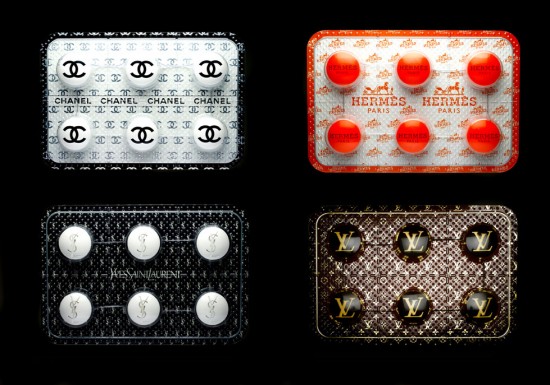 In addition to the YSL designer drugs, Desire Obtain Cherish has also “manufactured” pills for Hermes and Chanel. From KM Fine Arts:

Jonathan Paul is a provocateur who uses sleek, shiny, and accessible imagery that engages and tempts viewers – where they ultimately succumb to their primal instincts to take ownership of the object. Paul’s body of work entitled #undertheinfluence may refer to drugs, sex, pop culture, Hollywood, or the myth of Los Angeles itself. Or it just may be the artist’s influence on those that fall prey to his siren song.

#undertheinfluence is perfectly packaged and priced (those pill packs go for $32K with the big blow pops being $10K a pop) for Hollywood’s new young art consumers. From the content to the setting to the nod to social media, the art is designed to sell…to the very people who it critiques. When the credit card transactions are registered, the performance is complete. 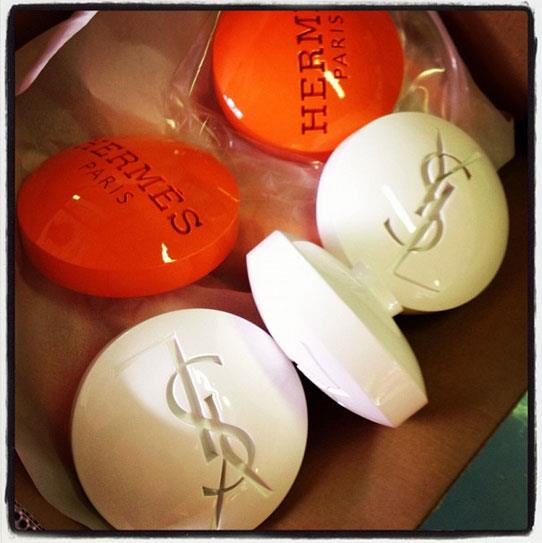 Desire Obtain Cherish has a cohesive “popped culture” vision, and he delivers it in attractive packaging. The fact that it isn’t complex or wholly original artwork is irrelevant (to me, at least). Paul rejects art theory and credits his time at an ad agency for “helping him understand real work and people.” Communication is the goal, and transmitting the message is key. When art is needlessly (key word) complicated, the message is missed and the viewer is lost. [Like this.] An IV drip with a Prada logo (below) is crystal clear. 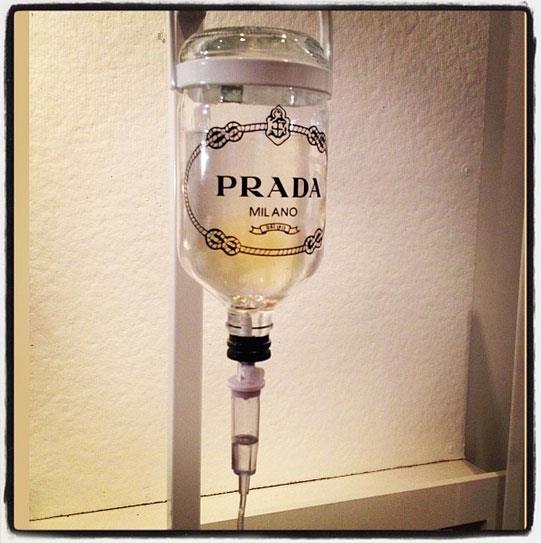 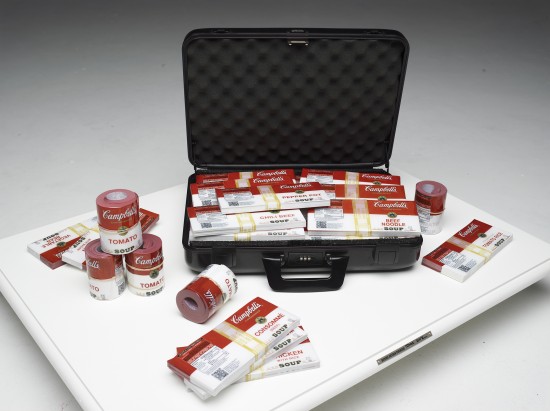 That’s clever! I bought the Target cans and I’d buy a Desire Obtain Cherish faux Campbell’s Soup label, too. I dig those cans, and I also acknowledge DOC’s point with a “guilty as charged” shoulder shrug. Perhaps what makes this work different from other art that critiques its own collectors is that Jonathan Paul seems to be working out his philosophy through his art. It’s critical, but with a wink. Playful, rather than straight up judgmental. The humor gently coats the artwork, allowing the 99% to be in on the joke while the 1% makes the purchase and proves the point. Compare what DOC does to being punked by Banksy by buying into Mr. Brainwash or even the “You’re an asshole for buying this” posturing of The Sucklord. 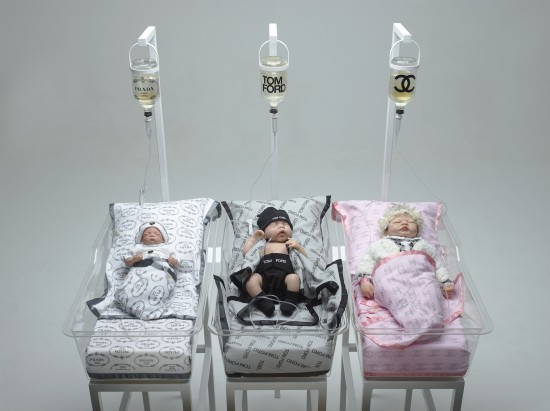 The objects make you happy and you wonder why? It’s as though several of your favorite things have been enlarged and rendered impossible yet at the same time they fulfill their inner purpose of tempting you. You live in anticipation because they are not real objects and will never ultimately satisfy your hunger…

These are drugs that typically reduce pain and other aliments, however these new designer drugs appear to aid misguided ambitions like status or identity through materialism. It’s a shopper’s “high” neatly packaged for easy consumption. 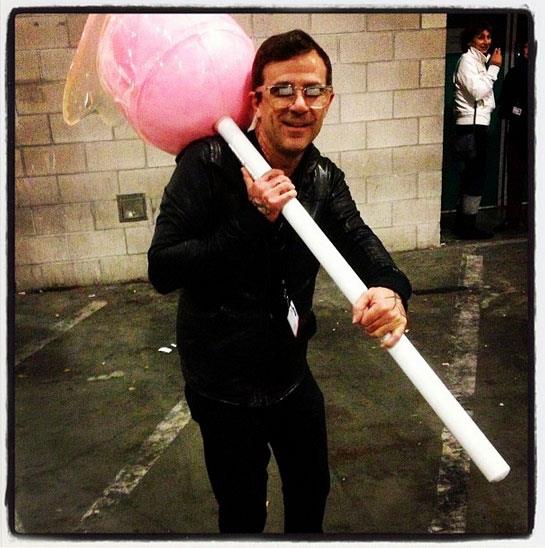 I’ve previously written about DOC’s sexy suckers and delicious messes (initially because they’re executed by my friend and fabricator to the stars, Pretty in Plastic [interviewed]). Well in addition to the pills, #undertheinfluence breaks out the full fleet of sweets, and the gallery (literally) rolls out the red carpet for new addicts. Once more (with feeling) from KM Fine Arts:

Desire Obtain Cherish succeeds by tempting his audience with lush materials and eye candy. We accept it and become part of a microcosm of consumerism, sex, and hype that feels particularly good when we are under the influence of this artist.

Amen to that. #undertheinfluence runs through May 11th at KM Fine Arts in Los Angeles. It’s been ages since I felt compelled to write about a show I didn’t attend, and I’m going to try to get down to LA before it closes! 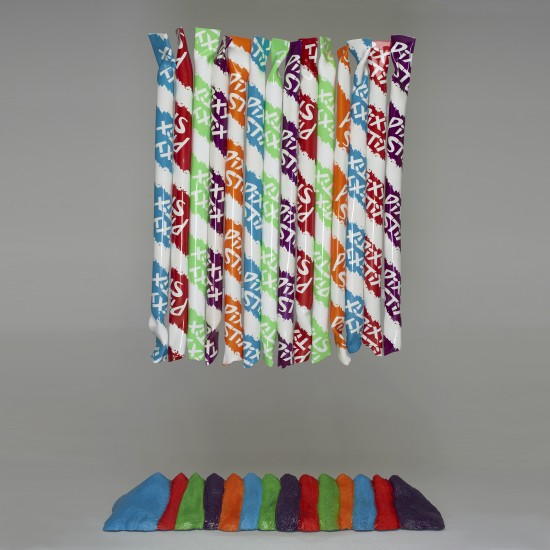 First The Pixies, Then The Dust 2 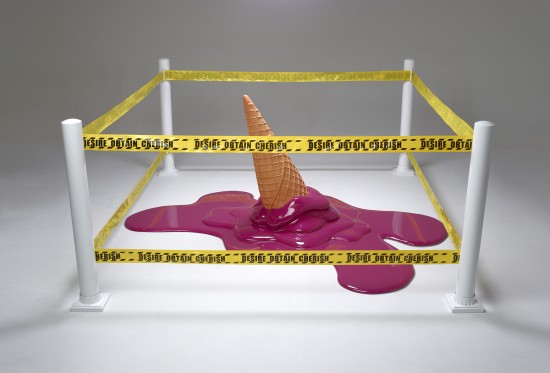 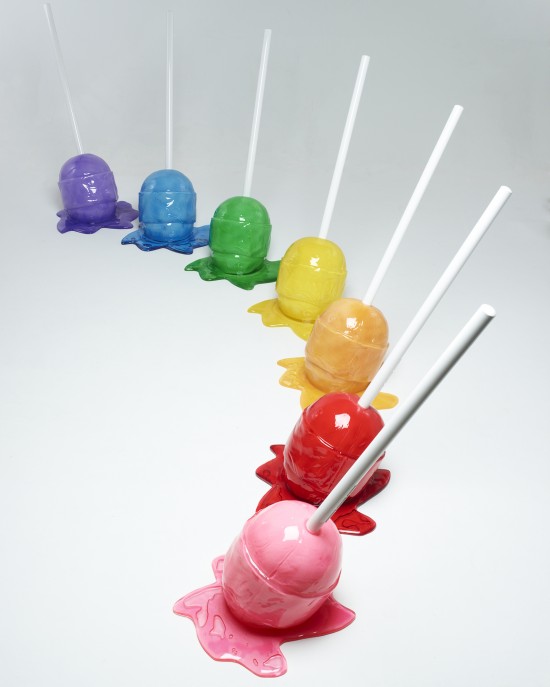