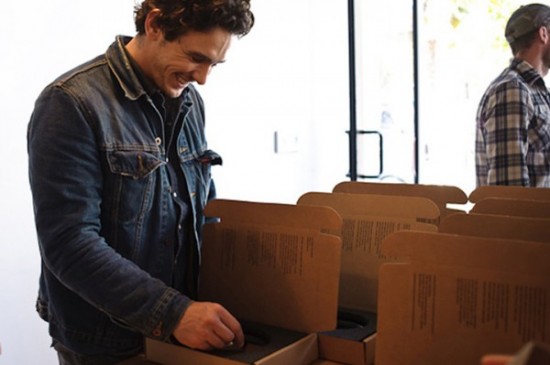 James Franco has a well-documented passion for dabbling in various areas of the arts, and thanks to THE THING Quarterly, he now has his own limited edition art multiple. Issue 14 of SF’s “object-based publication” is by Franco. It consists of a 6×8.5-inch table mirror with a wallet sized photo of deceased actor Brad Renfro and accompanying text handwritten in lipstick by Franco. The text reads “Brad Forever.” The issue also includes a 9.5 x 27-inch black and white fold-out poster of James receiving a carving of the word “BRAD” in his arm by tattoo artist Mark Mahoney. 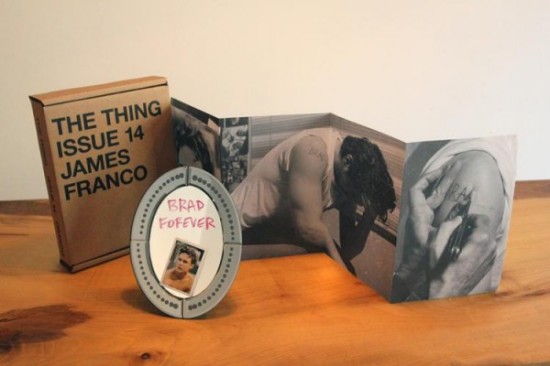 THE THING editors, Jonn Herschend and Will Rogan, told Flavorwire that Franco said he and Renfro looked at their 2002 film, Deuces Wild, as “their Mean Streets“. Renfro died of a heroin overdose at 25 in 2008, and though he had starred in some interesting films (Bully, Apt Pupil), he was left out of the year’s Oscar’s obituaries. Perhaps as a way to create a lasting legacy for his friend, as part of this project, Franco had Mahoney carve “BRAD” into his right arm with an Italian switchblade. 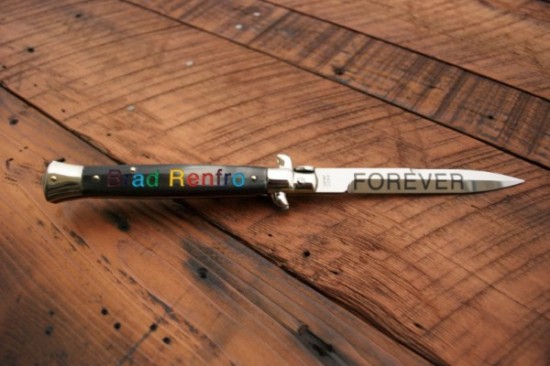 Franco came out to San Francisco where “for an intense 5 hours, with a small crew of 10 people, James hand-wrote with lipstick on each issue.” For $75 here, you can buy this unique art object adorned in lipstick by James Franco. I can’t say that a small mirror with a photo of a shirtless young man really fits my collecting criteria, but no doubt this is a really interesting idea and a great fit for the right person. Flavorwire also reports that in the next few days, THE THING will release 100 signed Latama switchblades with “Brad Renfro” in multicolored text along the handle and “forever” in black along the blade. If you happen to be starting an ironic gay gang, this has your name (and also Brad Renfro’s) written all over it.