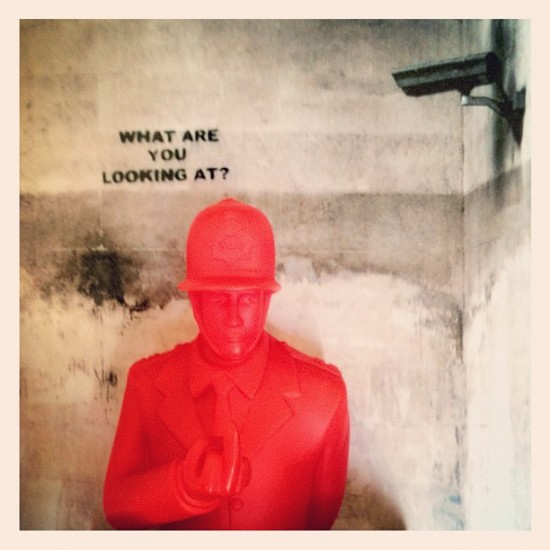 I can’t think of a toy I’ve written about recently that’s polarized collectors quite like the Banksy-inspired Rude Copper and Bomb Hugger by UK-based toymakers, Apologies to Banksy. After I wrote about the toys here, David from Apologies to Banksy got in touch and asked if I’d like to check out some samples. 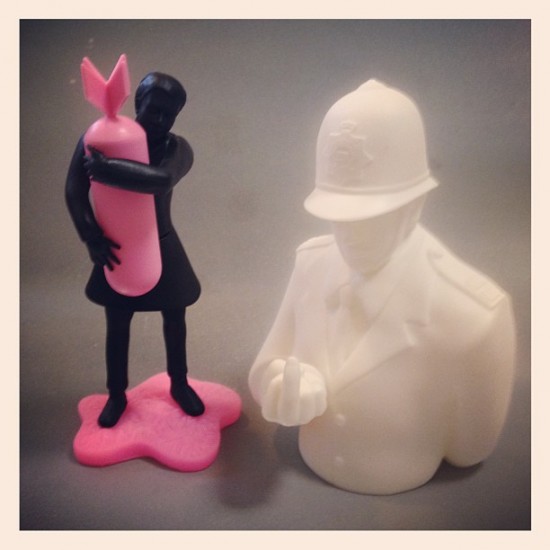 You’re looking at photos I took of Bomb Hugger and Rude Copper. Both figures (above) are made of rotocast vinyl and PVC, stand 6 inches tall, retail for £20 (~$30 USD) and come boxed with extra stuff. Bomb Hugger has an additional bomb and base in a different color, and Rude Copper comes with paints and a paint brush. Both boxes include stickers, too. 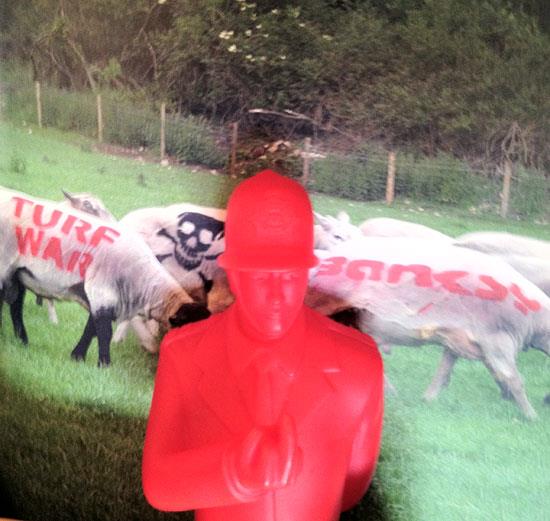 Apologies to Banksy also sent me a 4-inch Rude Copper  (£10 or ~$15 USD) in red (above). The online shop shows a spectrum of 9 colorways, some currently available and others forthcoming. Because I’m clever, I posed the 4-inch figure against a “Turf War” backdrop from Banksy’s Wall and Piece book. OK, on the plus side: These toys are priced fairly and packaged nicely. I appreciated that Apologies to Banksy offered me figures to check out and rushed them to me without asking for anything in return. 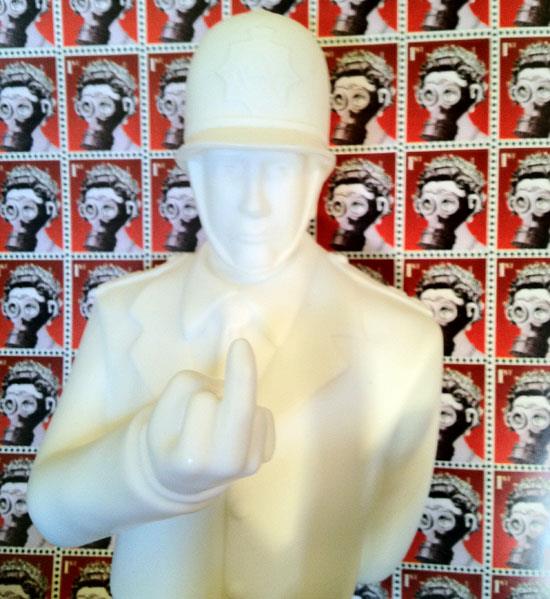 As I waited for the toys to arrive, I wondered: What’s their motivation? Why are they making these figures? It turns out, Apologies to Banksy is owned by a Banksy fan and collector. He created the toy line to have a side project based around something he enjoyed. Apparently in the UK, the market for bootleg Banksy products is as big as the market for Taco Bell x Doritos Tacos Locos here in the States. But Apologies to Banksy didn’t want to turn an existing Banksy artwork into some Cafe Press promotional product art. David wrote to me:

A great deal of R&D has gone into these toys: creation of 3D from 2D models, tooling, prototypes, etc. so it’s not simply a case of replicating an existing image and printing it on a T-shirt or alike.

While I recognize and applaud the work that went into these toys, I wonder if they’re quite ready for market? I asked fellow Banksy bootlegger, 2bitHACK, to discuss. 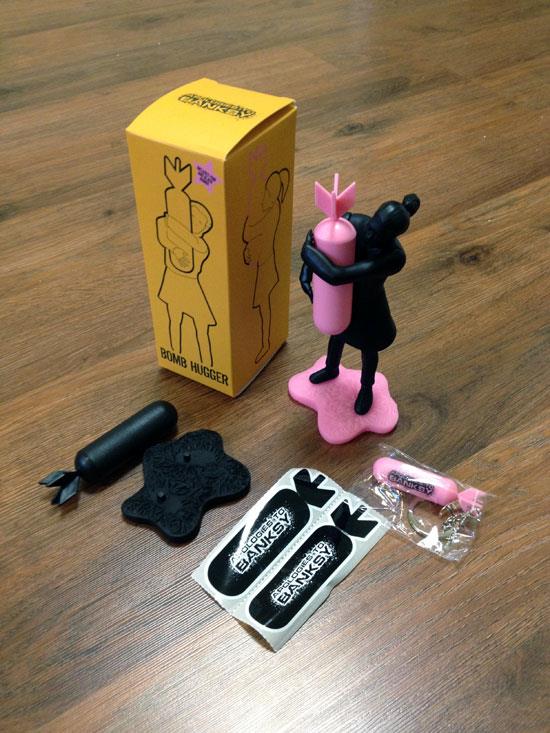 Let’s talk about Bomb Hugger. Theoretically, it’s a fun idea (everyone likes girls with bombs). But in practice, the piece is problematic. The figure is fugly (in a “Monkey Jesus” kinda way), or as 2bitHACK puts it: “What’s going on with the beefy sausage arm?” I posed this question to Apologies to Banksy and learned that the nature of the figure meant they’d had to use different materials for the arms and shoes. They will be  improving the fit of the arm to the torso, and they’ll look into resolving the fugliness if possible. 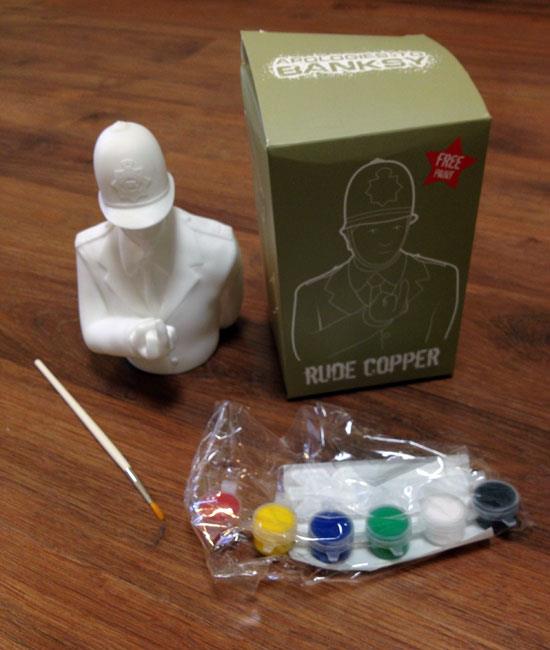 Rude Copper is cleaner (and kinda prettier) than Bomb Hugger, and he doesn’t suffer from the same visible seams. There is, however, a perspective problem. I would’ve preferred the figure’s head be angled slightly upward so that if you’re staring at it straight on, the bobby hat brim isn’t casting a shadow over the whole face. 2bitHACK also questions the “odd perspective” of “looking left while flipping off to the right.” (As I so seldom flip people off, I can’t speak to which direction I’d look while doing so.) 2bit also suggested pairing the figures with a base/background ala Luke Chueh’s Target Bear, which I think is a good idea. 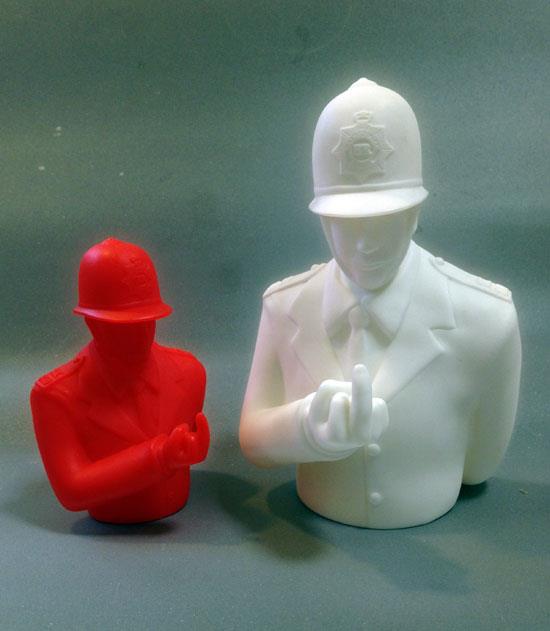 Apologies to Banksy is OK with the idea that their toys may not immediately evoke the real Banksy. There are many people (for instance, anglophiles) who will appreciate Rude Copper for the uniform or the gesture. Besides, Banksy’s talent is in technique and timing. It’s a combination of medium and message. We recognize the stencils and the politics more so than any character design. 2bitHACK says that despite her shortcomings, he does like Bomb Hugger, and I think it’s going to be fun to paint the DIY Copper (green, probably). 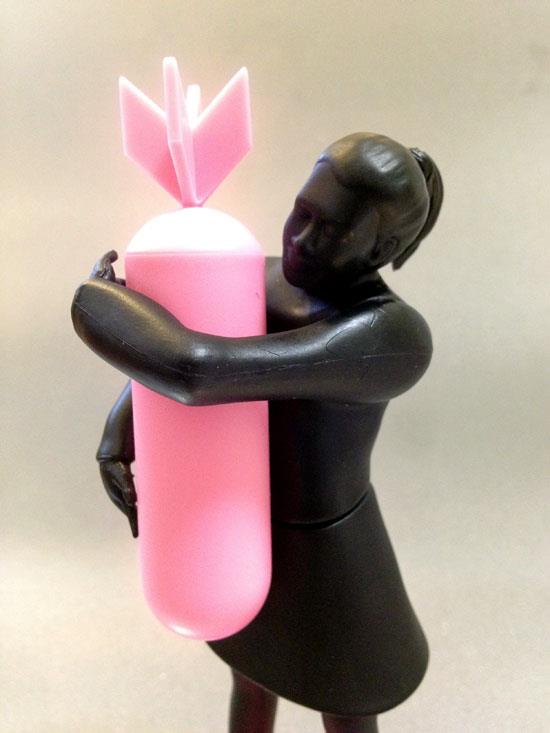 I dunno, call me daffy (it’s English for crazy!), but I just don’t hate on these figures like some people do. I think they have some obvious QC issues to work out and collectors should should have a butchers at (it’s Cockney for look at!) my photos before buying. Folks on the other side of the pond will also be able to check out the toys in person when Apologies to Banksy throws the now-obligatory (sigh) inaugural custom toy show in East London this coming August.

Apologies to Banksy toys are available online here. I hope you’ve enjoyed this rare toy review. They take a while to do. I leave you with a musical pairing.