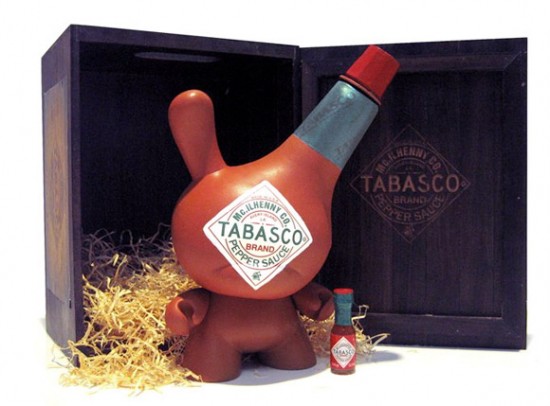 Breaking news! Sket One has revealed that Tabasco hit him with a cease and desist for releasing 10 toys using their logo. Sket’s Tabasco Dunny, as seen on Kidrobot’s blog, is an 8-inch toy that he modified in an edition of ten. The custom Dunny followed up his previous condiment-themed toys, which included spins on ketchup, mustard and relish.

Acts of appropriation and homage are part of the fabric of pop art. Nothing’s changed about that. We’re just silly with lawsuits these days. Remember Andy Warhol’s Brillo Boxes? I can’t find any indication that Brillo had beef with Warhol. In fact, what I did find was that Jim Harvey, the abstract expressionist painter and commercial artist who actually designed the box for Brillo “laughed it off”. That was in 1964. Flash forward to 2009. The Associated Press wasn’t laughing when Shepard Fairey used one of their photographer’s image of Obama. They got litigious.

It’s been alleged that Tabasco has a history of going after folks who mess with their trademark. To be fair, you can see why Sket’s figure might have caught their attention. I count four Tabasco logo hits on the toy and packaging, plus there’s an actual bottle of travel-size Tabasco included in the box. Although only ten of these figures were made, they’re each priced at $475, which means at the time they sold out, $4,750 had transferred hands. Could this have been avoided if Sket One had switched up the logo to “toybasco”? Maybe.

All of that said, I think it’s LAME for Tabasco to come after an artist releasing an ultra-limited edition of toys as a homage to their product. How has Tabasco been “damaged” by this? Big money (which is rent and food) to an artist is peanuts to a brand like Tabasco. The only thing publicly accomplished by this is a barrage of “you suck” tweets directed at @tabasco. And that’s pretty much where I’m at, too. Pick your battles, hot sauce.