I really appreciate when manufacturers pull back the curtain and show us some of their process. This is especially refreshing coming from Coarse Toys, a company whose precision borders on perfection. Mark Landwehr [interviewed] gets it. He writes:

In an age where change is the only constant, and many variables can detract from a pure artistic vision, coarse continues in search of “a spotless future”, where every aspect of our output is carefully considered and executed in the finest technique known to us – by hand. Every coarse piece that arrives at your doorstep is brought into existence by unwavering attention to detail and relies almost entirely on handcraft. It is our most fundamental belief that we need to be “hands-on” involved in every stage of the creation process, in order to bring true artistry to you once you open your package.

As consumers, we distance ourselves from the people who make our products. As collectors, it’s intriguing to think about the artists, designers, craftsmen and fabricators behind the “machine-made” vinyl toys. Landwehr points out that Coarse uses “traditional often thought to be obsolete” and cites the human intervention during “mold-making, casting, pulling vinyl parts, careful assembly, painting, detailed brushwork and concluding with diligent piece by piece quality checks, packing, wrapping and shipping”.

The ruminations on the staying power of “hands-on” come via Coarse’s announcement of its first DIY/blank figure. Priced at ~ $165 USD and available now here, the 12-inch “Paw! Raw” vinyl is “ready to take your signature”. Here’s how Coarse puts it:

Coarse is on a mission to protect one of its rarest species. In order to salvage released editions, we are now offering one of our most iconic art figures, exposed in raw beauty.

What’s especially interesting about this is Coarse’s reasoning for the release. Unlike toy companies that release blank versions of their figures straight out of the gate, Coarse held back and focused on developing its own vision, aesthetic and characters. But as hungry customizer clamor for new “platforms,” they begin to claim Coarse, and limited edition originals fall victim to sub-par paint jobs and sloppy Sculpey. 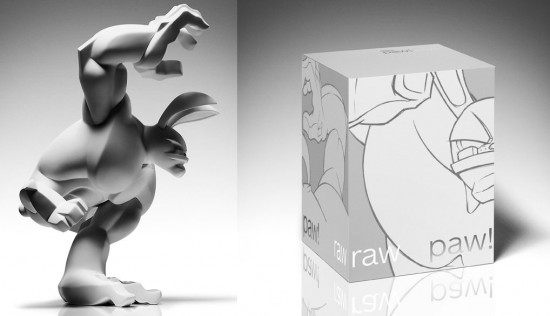 I imagine Coarse views releasing a blank Paw! as something of a necessary evil. I mean, I’ll say it: I can only think of one or two instances in which I saw a customized Coarse Toy that, in my opinion, was on par with, much less superior to, the original. (This is one of them, but in the end, was it worth all this Kidrobot forums drama?)

If you think I’m wrong about Coarse’s motivation, consider the fact that unlike Coarse’s usual one-per-customer rule, you can buy as many “raw” Paws as you like. In fact, if you buy four of them, you’ll get an original sketch from Mark. I can’t help thinking it’s sad to feel like if you make a toy today, you have to release a blank version. But if it keeps Coarse Toys originals in circulation, maybe I’ll start seeing customized Coarse figures in a more positive light. To be continued…