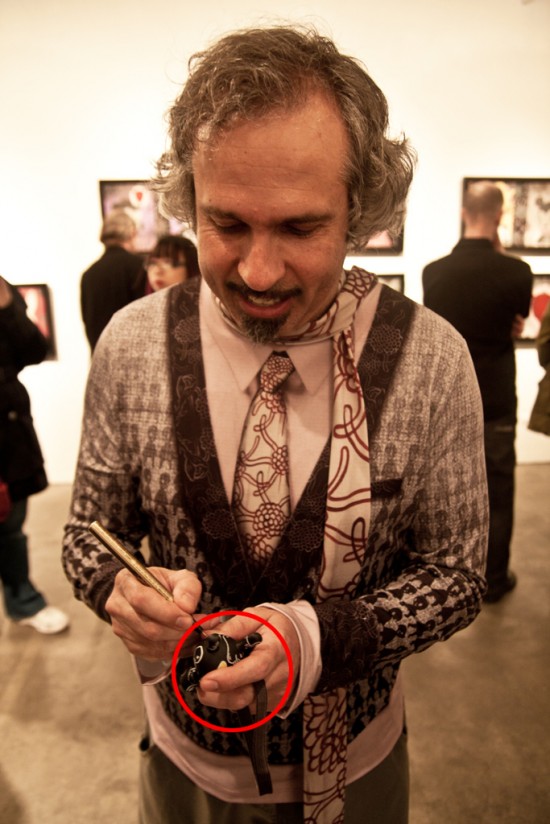 I spotted this photo of Gary Baseman signing his Two Tone Dunny during Saturday’s art opening for Walking Through Walls at Jonathan LeVine Gallery. It immediately struck me how tacky it seemed to request an autograph on a Dunny at an artist’s fine art opening. 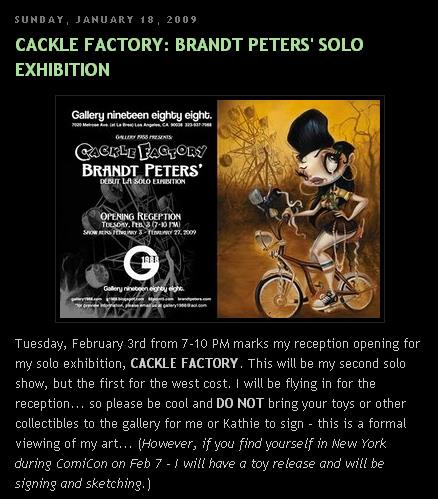 In 2009, I read Brandt Peters‘ request that fans not bring toys to his fine/formal art shows. At the time, I recall my first thought being: “what a dick thing to say!” But in these two years of “wisdom,” I’ve come to actually understand and respect his viewpoint. 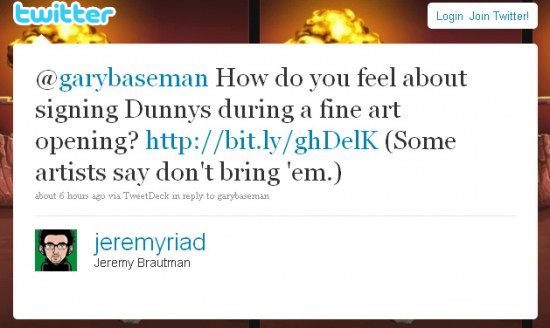 I can’t really explain what accounts for my change in perspective, but the thought of approaching an artist at his/her art opening and asking for an autograph on a $10 toy makes me feel…uncomfortable. My initial reaction to the “don’t bring your toys” request was to be defensive: “What? Your toys aren’t ‘art’ enough now that you have paintings in a gallery?” But now I see the error in that. Artists want to grow and also to enjoy the few-hour opening reception that is the result of months or years of making art. It’s not about toy art vs. 2D art, but rather about being involved in the current artistic undertaking. Chances are, Peters et al would feel similarly unhappy for a fan to bring in a painting from a previous solo show, but that is less likely to happen. The real issue is that many of us coming from toy collecting are not versed in the accepted practices of gallery behavior. It’s not appropriate to foist a toy (or probably, anything) at an artist during an opening. We as fans need to grow, too.

“Don’t bring [toys] to an [art] opening. Bring them to a signing,” said Gary Baseman this morning. The catch-22 is, once artists become more popular on the gallery circuit, will they continue to do toy signings?

What do YOU think?