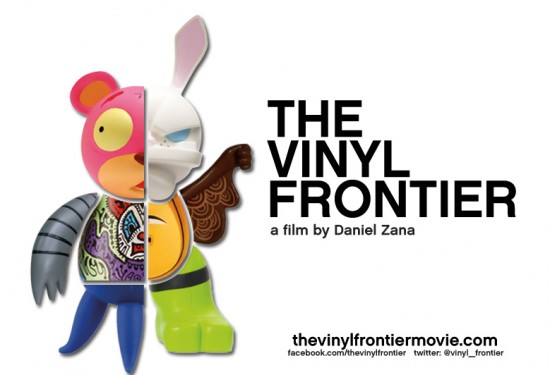 Daniel Zana is doing a The Vinyl Frontier panel discussion at SDCC on Saturday, July 23rd from 4:30-5:30PM in Room 24ABC. Frank Kozik, Keith Poon, Tara McPherson and Jermaine Rogers will be present. Daniel invited me to write some questions and co-moderate the discussion with him, so you will probably see me there too.

I got to see The Vinyl Frontier on the big screen in San Francisco last year. It’s now available on DVD with bonus footage. I reviewed the documentary and had a few questions for its director. Read on as we get to know the man behind the camera in this The Vinyl Frontier interview… 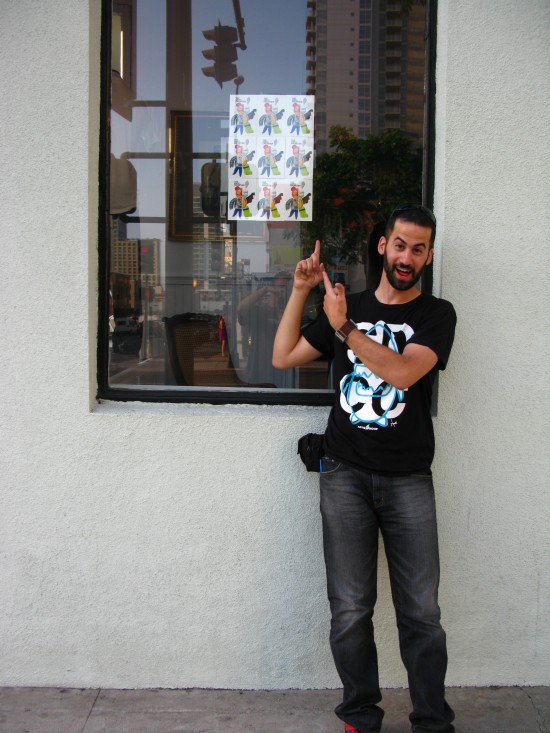 JB: We learn a lot about the vinyl toy scene over the course of The Vinyl Frontier, but we find out very little about its director. Please provide a bit of info on your background: the life, work and educational events that lead to you making this documentary.

DZ: I was born and raised in the San Fernando Valley, and as a kid I would always collect stuff like keychains, baseball cards, Marvel cards, comic books, etc. After finishing film school in California, I was working in TV and I had this desire to make a film. I had done quite a few short films and music videos, so I was ready to take the next step and make a feature film. Since I didn’t want to max out all my credit cards making the film, I knew the film would have to be something with a small budget. The documentary format offered me a chance to work on something I wasn’t completely familiar with, plus I figured I could do it on my own for a while. As far as subject matter, I knew right off the bat that it would have to be something I was passionate about, so I picked designer vinyl toys. They were an evolution of the action figures that I collected as a kid, combined with the fun graphical style that I would see in cartoons and comics. 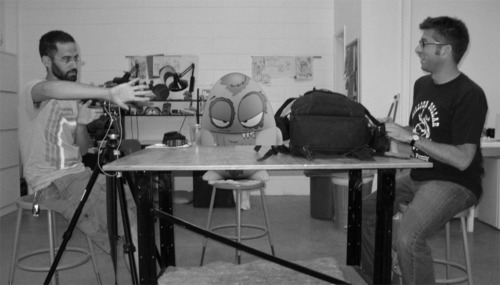 I began shooting in 2006 and didn’t really wrap until the end which was about 4 years later. It was an ongoing production cycle through the years; I would continue to shoot interviews with artists as I cut the film. With each new interview, I felt that a new character and opinion was being introduced, giving the film a more well-rounded view of the movement and the issues surrounding it. 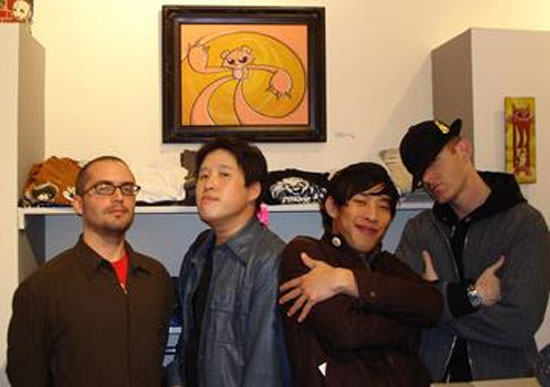 Prior to beginning filming, were you acquainted with the artists and other people you interviewed?

I was familiar with some of the artists before I started shooting. I used to go to Cannibal Flower art shows in downtown LA, and I saw art from guys like Luke Chueh, Thomas Han. and Joe Ledbetter. After starting production of the film, I went home and I realized that I had a turtle sticker that Attaboy had done stuck to my door dating back to 2004. Prior to shooting, I had a cursory knowledge of other artists like Tim Biskup and Gary Baseman as well, seeing some of their stuff at Giant Robot. 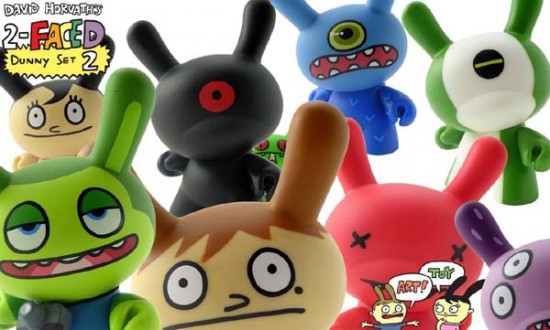 What was your own introduction to the vinyl toy scene?

I had been going to San Diego Comic Con for a while and I think it was around 2004, where I first saw some Kidrobot stuff, but it didn’t register with me until I picked up a toy for myself. My first vinyl toy was the red two-faced Dunny by David Horvath that I actually purchased from Urban Outfitters. After deciding to make this film,  I attended as many trading parties and artist signings as I could. I also would read all the toy blogs and participate in the Kidrobot Message Boards. 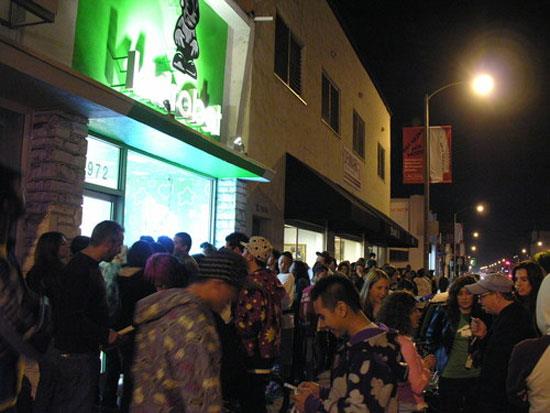 Looking back on the time period in the film, you can already see several ways the scene has changed. For one thing, Kidrobot is never that crowded anymore. But on a positive note, Ferg was able to quit his day job and now makes toys full time. What are other changes you’ve seen?

There are so many new faces in the scene since I started shooting the film. I think the more the merrier. If there are more artists putting out unique stuff, it forces people to be innovative with their designs and hopefully will inspire creativity. But if the crowding of the scene sparks tons of imitatiors, and we have 25 different bear or bunny themed toys, then we have a problem.

I also like that people are doing a lot more themselves, forgoing the larger companies and either financing toys on Kickstarter like Bob Conge and Sergey Safonov did or making them out of resin like Sucklord. 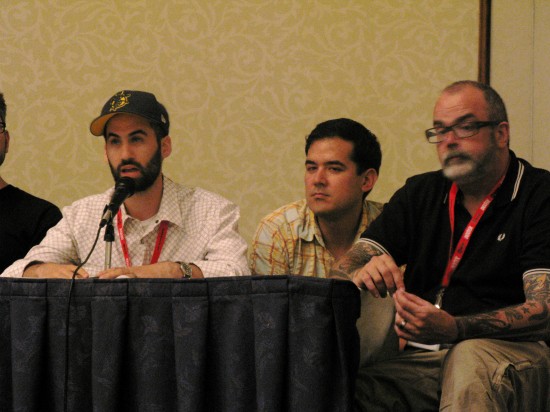 At the time of the shoot, what did you make of Jonathan Levine’s appraisal of the value of vinyl toys as an art form? Have your thoughts on this changed since?

He certainly has a point in saying that anything mass produced doesn’t hold the same value as a one-of-a-kind painting by an artist. I personally appreciate a toy that has been customized or hand painted for a specific person much more than a toy that is packaged and sold in mass quantities. I don’t necessarily see the vinyl toy form as something culturally less than a painting, just different. 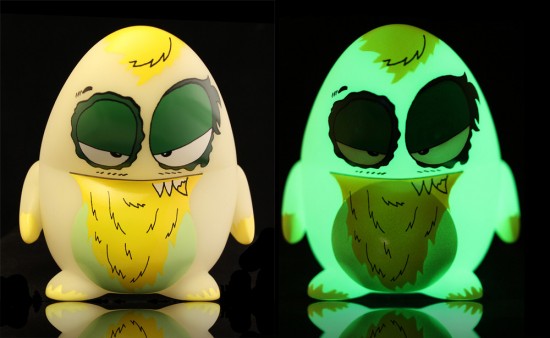 A handful of artists in your film have moved away from making toys. Some have declared that toys are “over,” while others are choosing a more “fine art” path. Dalek, Tim Biskup and Attaboy come to mind. What are your thoughts on this?

Toys are expensive to make. I also think that less is more to some extent and the fewer pieces an artist puts out, the more desirable/valuable their work becomes. Dalek is doing this amazing geometric work and in my opinion wouldn’t make the best toys. Attaboy is doing some toy stuff, but is focusing more on self-produced resins. Tim Biskup is doing a lot of painting these days and it’s great, plus he’s doing stuff with Gargamel every once in a while.

On the topic of colorways, are you with Team Kozik or Team Levine on the topic?

Both.  A good colorway example is “The Seeker” by Jeff Soto. Each edition is not only a different color with unique horns, but they all look fantastic on a shelf. However, in some cases, it can be alot for a collector and it really gets me when there is no innovation between each different colorway. 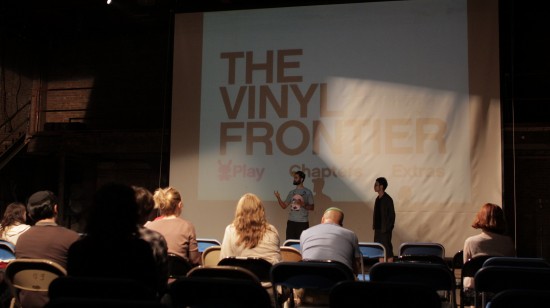 When you shot the film, people were already talking about the rise of DIY and customization in the scene. Custom culture is now a dominating force, with many producers insisting that artists release a blank/white DIY version of a production toy. Thoughts?

I love DIY toys because they allow just about anybody to be an artist. Plus when you see 15 of the same toy on a shelf, and each is customized in a completely different way, it’s really exciting and inspiring. Plus, I’ve seen plenty of artists who start out as DIY artists and eventually end up with their own production toy, which is fantastic. 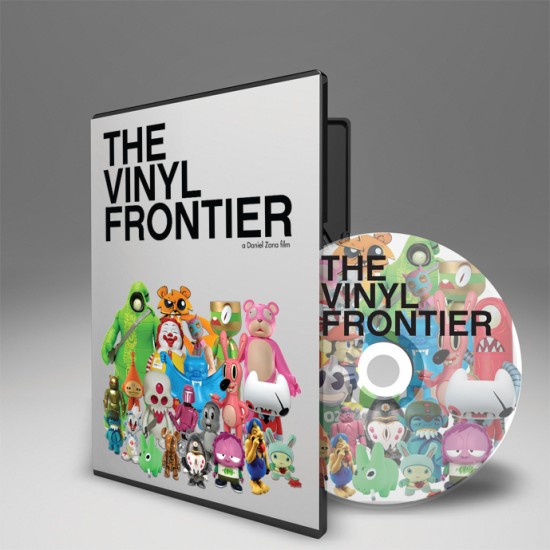 What will the next evolution of the vinyl toy scene look like?

I can already see a huge evolution since I finished the film. More and more people are doing toys in resin and other mediums; essentially going the more independent route, since it’s much harder to get a toy made by a large toy company if you’re an unknown. In the more distant future, the next evolution will be around the intersection of technology and art. I can totally see people using affordable 3D printers hooked up to their computers to make their own DIY toys and customize them by hand. 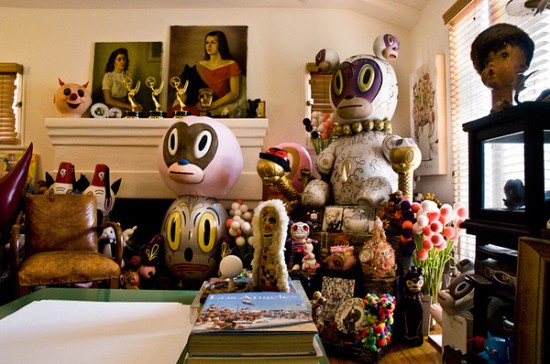 Absolutely insane. It’s very much like the scene in Raiders of the Lost Ark, replete with treasures of all types. You’ve got loads of vintage toys, paintings, and books stacked up to the ceiling next to a bunch of pieces from his friends like Mark Ryden, Kaws, The Clayton Brothers and Tim Biskup. During his interview for the film, he had mentioned that he liked to collect vintage photos of people in costumes. So after the shoot, he was kind enough to give us a tour of his house and we were lucky enought to shoot it as a featurette for The Vinyl Frontier DVD.

SEE YOU AT THE PANEL DISCUSSION! 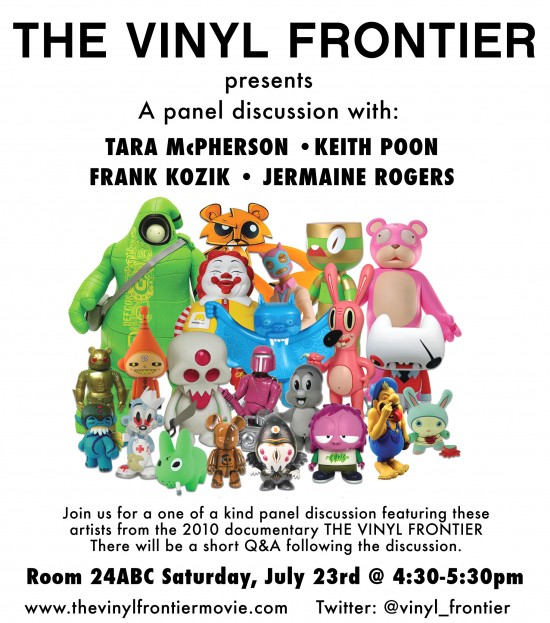