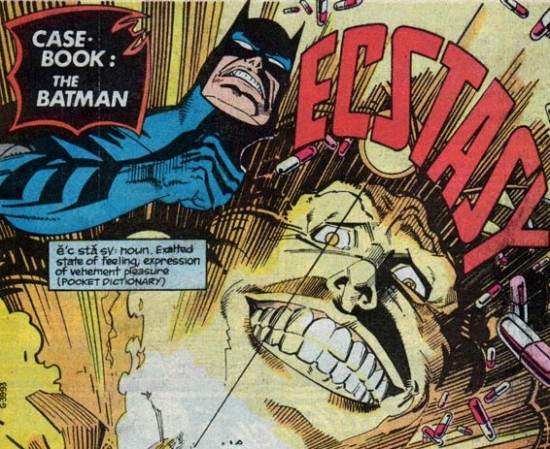 Reefer Madness is a midnight cult movie to my generation. It remains just a footnote that this cannabis celluloid classic was actually financed by a church group under the title Tell Your Children. I guess I have a sweet spot for incidences of government propaganda permeating pop culture. In 1988, DC Comics chose MDMA/ecstasy as the unlikely scapegoat for a killing rampage in Batman 594. Erowid, my favorite resource on “psychoactive plants, chemicals and related issues” posted some great scans of the issue that are worth checking out.

This comic represents some of the absurdist “Just Say No” propaganda common in the late 1980’s and is an amusing piece of War on Drugs memorobilia. This comic also represents an interesting piece of history because it came somewhat after the first crest of media frenzy about MDMA. By 1988, the “designer drug” hysteria had been mostly drowned out by the “Crack Epidemic” scare. When Ecstasy fear mongering was reinvented in 1998-1999, the previous wave of anti-ecstasy media was all but forgotten. The story in Batman 594, written by Alan Grant and John Wagner, is very thin and the artistry of the book, drawn by Norm Breyfogle and colored by Adrienne Roy, is of middle quality.  The storyline is all the more absurd since Ecstasy is known to be one of the psychedelic-class drugs least likely to precipitate severe traumatic Post Traumatic Stress Disorder (PTSD) or lasting psychosis. 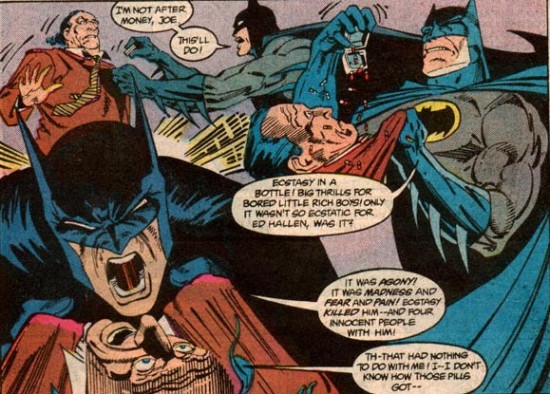 I was all ready to make snarky comments involving glowsticks, but BoingBoing posted it first and got the jump on me. However, one BB reader, akbar56, added some interesting incite to the chronicling of drugs in comics:

What is interesting to me is not 10 months earlier in the same comic, Batman encountered a new designer drug called “Fever” that was much more logical in it’s approach and even tho it was a fictional narcotic, it dealt with the known problems of drugs/psychotropics in a much better way. Even for a comic book. Fast forward 8 years and in Shadow of the Bat #56-58 Batman encounters Poison Ivy working for the Floronic Man making a “super advanced marijuana” that he wanted to get everyone in the world stoned so he could take over. The story does the normal “just say no/drugs are bad” route for the most part but in the end the conclusion is very ambiguous. One could easily assume there was a conflict between editorial mandate to make this story vs. writers going “but its just weed!” 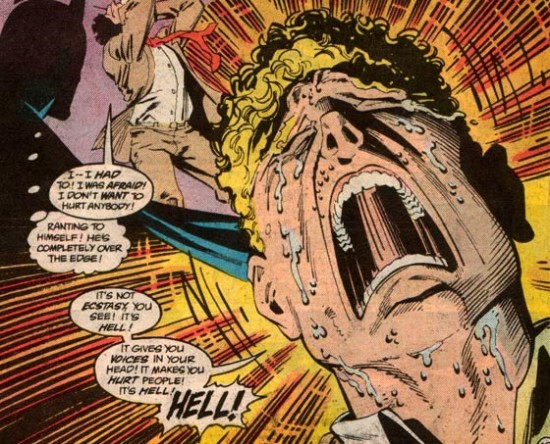