SoHo-based GREY AREA exist in the “undefined space between art and design where art is made functional and the functional is made art.” [Me too!] Co-founder Kyle DeWoody recently curated GREY AREA’s inaugural art show, Sound Quality, a mashup of visual art and aural pleasures. DeWoody got the concept for the gig because she noticed “a trend of artists using music’s iconic imagery and forms in the works carried by GREY AREA.” While Sound Quality closed this past weekend, the object-oriented “merch” table remains open for business… 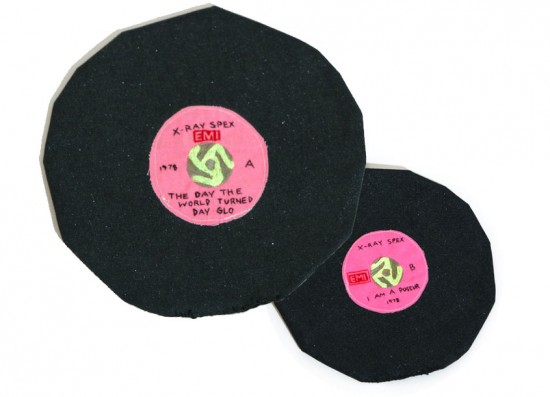 Megan Whitmarsh, who you may recall from her hand-sewn school supplies, contributed two embroidered fabric records: Buffy St. Marie and X-Ray Spex. Of her work, Whitmarsh states: “Making replicas of things feels akin to play, which is perhaps why many artists undertake it.” Available here. 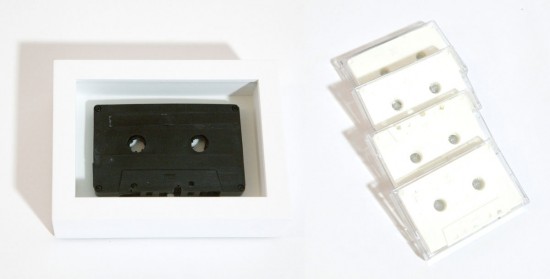 Shelter Serra makes his debut on this blog with an edition of ten cast resin actual-size cassette tapes. He writes: “This small sculpture is a memento of the analog days, when Walkmans and boom boxes replayed the hits.” The replicassettesTM jeremyriad are perfectly formed and framed popjects, but their prices may raise resinheads‘ eyebrows if you’re not used to New York ‘art’ pricing… Available here. 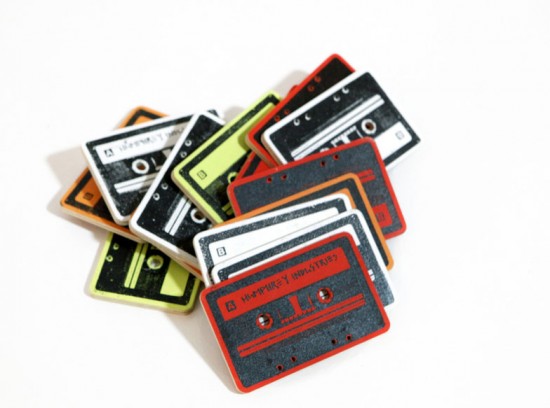 Ryan Humphrey also pays tribute to the tape, except rather than resin, he uses wood as his medium. The open edition replicassettesTM jeremyriad are paint and silkscreen ink on Baltic Birch plywood. Available in four colors here. 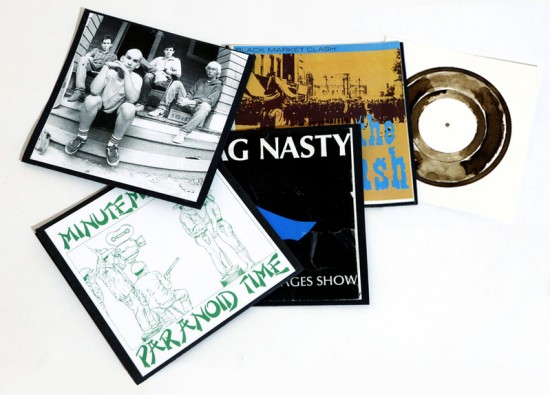 Ted Riederer likes records. And skulls. Preferably together. At the top of the post, you see his melted record skulls, which are based on “Primal Sound,” an essay by German poet, Rainer Maria Rilke. Riederer explains the correlation:

In this essay, he ponders what sound the coronal suture would make as it closely resembles a sound wave. He proposes that this process of combining what seems like disparate elements initially to create something that the world has never heard, is a model for making good art.

I like the concept of combinatorial creativity [explained] as a model for art-making. Riederer, who feels music saved his life, sees music as having “redemptive power”. [Me too!] A process-oriented artist, he made mandalas out of records by The Clash, The Minutemen, Dag Nasty and Minor Threat. Writes Riederer:

Using a modified compass, I score the rings of the 45s into the paper. Once wetted, the ink blooms with reticulation effects following the circular channels. I lose myself completely in the process.

Riederer will custom-melt a record of your choice for $400 here. Or pick up a pre-fab musical mandala here.