I’ve been meaning to write a few words about Toby’s Secret Society, the first mini-series of designer toys from Gary Baseman since Critterbox’s Fire-Water Bunnies in 2005.  I believe it’s also the first mini-series by Baseman to feature so many different character forms (eight) with a total of twelve different characters in the collection. Perhaps realizing that a Secret Society is not a “society” without its designated hierarchy and membership, Kidrobot intelligently made the decision to include the full cast of characters in each case of designer toys. This reduced the amount of duplicates within a case to a manageable four figures, and it guaranteed that the serious Baseman fan could purchase a box and walk away with a collection. 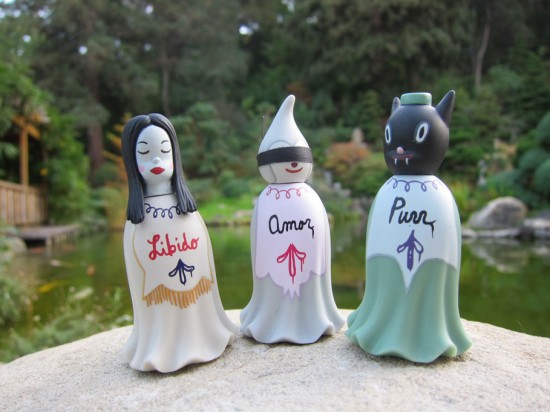 I like these figures. They look good as a group. Paint is where it should be and not where it shouldn’t be. Parts that are supposed to move do so with ease. Everybody stands up without risk of falling (into a koi pond). These assessments may seem like a given, but it hasn’t always been the case. In the case of Toby’s Secret Society, Kidrobot got it right. 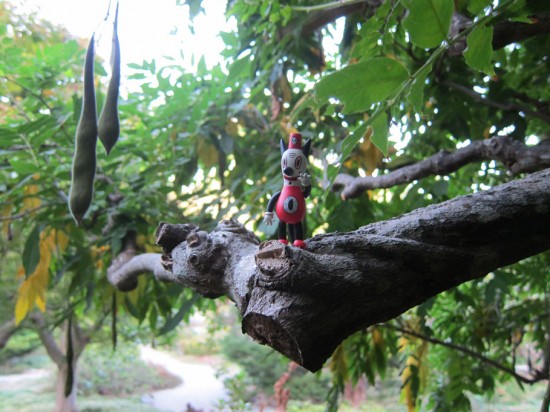 For serious fans of Gary Baseman (and collectors of early American toy art), a case of these is a necessary acquisition. They are fun and spirited (literally) and pure Baseman. I’m less sure how casual fans, “newbies” and youngsters will feel about blindly ponying up $9.95 each for the 7 “brethren” that are bereft of articulation. The articulated Toby, Baseman’s traveling companion and the “protector of dreams, memories and darkest secrets,” is the coveted character in the batch. Shrunk down from its origins, the proportions look and feel right to me. My case came with three Tobys, each with a variant accessory. I recommend Toby’s Secret Society be collected in full, if finances provide for it. It’s available currently from Dragatomi here.

This brings us to The High Priest of Toby, the 9-inch vinyl Baseman figure that Kidrobot released after the Toby’s Secret Society series…

Unlike my immediate excitement for the mini-series, news of the larger vinyl left me kind of “meh”. This feeling failed to change upon seeing and holding the actual figure. If you’ve already got Baseman’s 2010 Midnight Magi, the quality is similar here, which is to say: it feels a bit ‘cheap’. And although we’ve come to see the Toby character in a variety of forms (for instance, inflated), something feels off in the proportions of this one. Baseman has made tons of terrific, exceptional art toys, and The High Priest is just less arresting. The Midnight Magi got away with a $100 price point on account of it being branded as part of Kidrobot’s (misguided) foray into high-end vinyl designer toys. I can’t quite say that the 9-inch Toby feels like its worth a Benjamin though.

If you have money to spend and you like Baseman’s toy art, go for a full case of the Toby’s Secret Society minis, or track down his 2006 Dunces and Hot Cha Cha figures. You will not be disappointed.