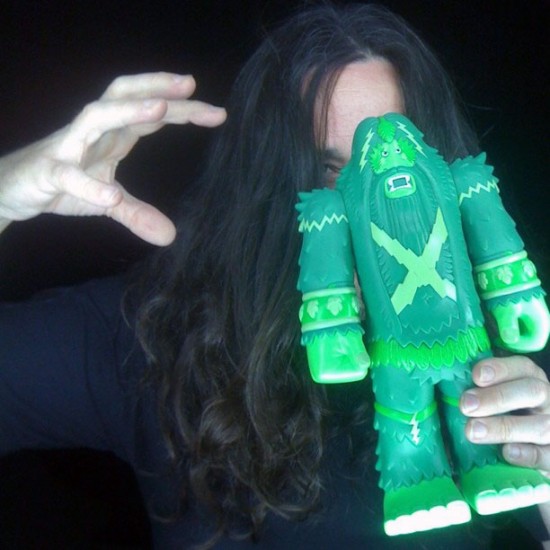 If a tree falls in the forest, and nobody’s around to hear it, does it still make a sound? I don’t have a fucking clue, but if Bigfoot drops a Forest Warlord toy in the middle of the night via Instagram, the sound resonates among his fans as they wake up and check their social media networks the next day.

The 11-inch Bigfoot vinyl toys are currently (and curiously, simultaneously) available through Bigfoot’s online store for $95 + shipping. Bigfoot produced them himself (with help from Kuso Vinyl) in four colorways: brown (edition of 450), purple (edition of 100), black (edition of 100) and green (edition of 100). While normal strategy suggests that colorways should be released one by one with time elapsed in between, Bigfoot deployed the whole gang at once (just weeks before Comic-Con, too). This is usually not considered good practice from a business perspective because it gives collectors too many choices. Companies tend to prefer releasing a single color and forcing collectors to buy it without the benefit of knowing what’s to come. (In a less jaded sense,  this strategy also allows collectors to save money between releases.) Bigfoot, however, isn’t at all interested in market manipulation. 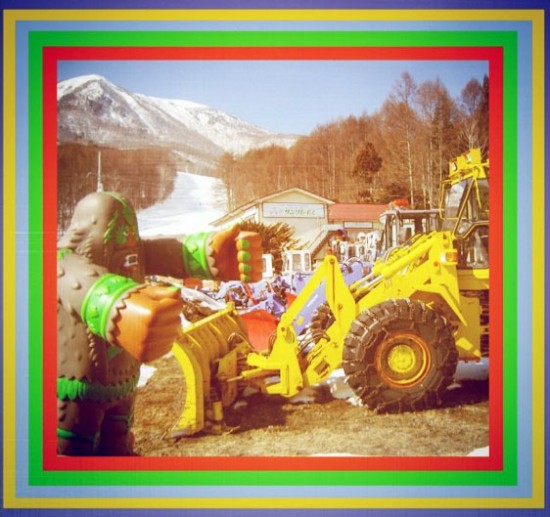 The gentle giant has been traveling extensively through Japan with the toy prototype and uploading his adventures on Instagram. One gets the feeling he’s not the “plan for a slow build-up” type of guy. That’s kind of admirable and fresh. So, Bigfoot gets points for passion and high hopes for it paying off! 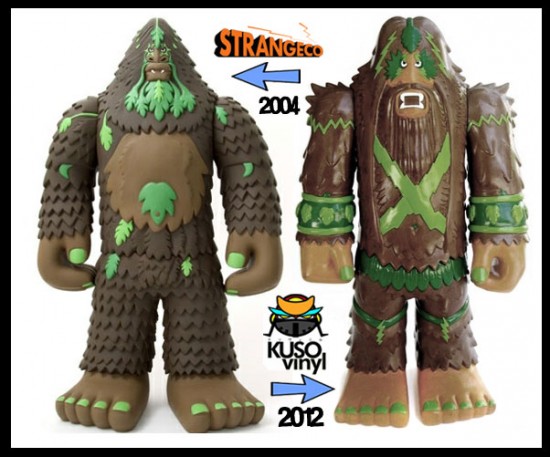 In 2003-2004, STRANGEco released the first Bigfoot designer vinyl toys in brown (edition of 450), green (edition of 450) and black (edition of 100). The figures were epic and quickly became fan favorites. Years later, their aftermarket prices can be astronomical. The new self-produced collectibles are close to the originals. Bigfoot has added the majestic purple colorway for 2012, and you can see some other aspects of the creature’s evolution in the graphic above. 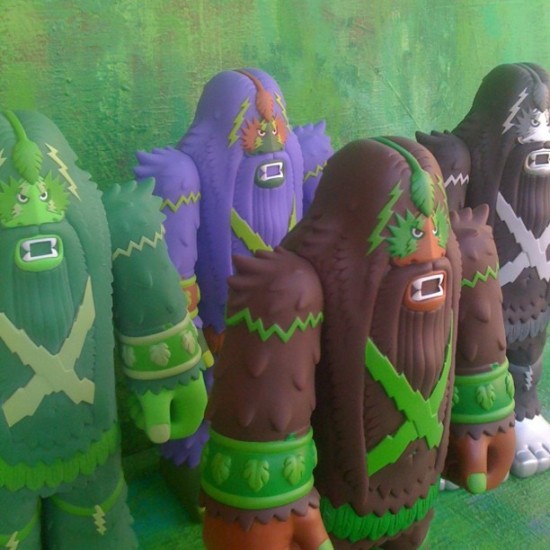 I didn’t pull the trigger right away on this because of a niggling issue with Bigfoot painting a mural on Chris Brown’s garage door. After thinking it over, I’ve realized there are instances when artists must take commissions (by cretins) in order to pay rent and/or finance personal projects. These should always be evaluated individually on a case-by-case basis. I decided that garage door infraction aside, Bigfoot is still the affable stoner I met back in December during his solo art show at Dragatomi. [Sidenotes: 1. Dragatomi will soon be releasing their Fujisan project with Bigfoot, so look out for that. 2. No pass yet for Ron English.] 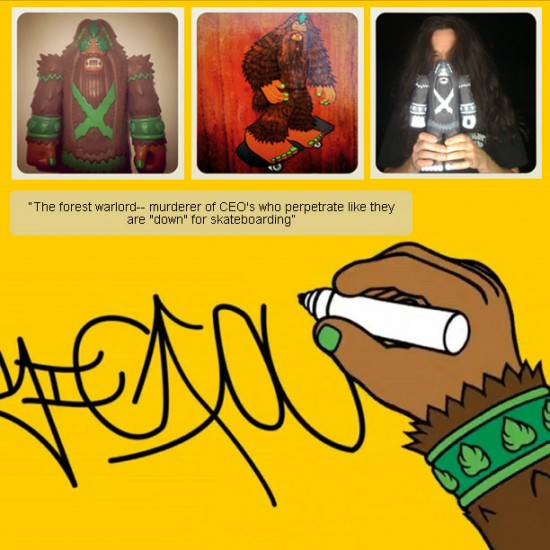 Bigfoot’s Forest Warlord, “murderer of CEOs who perpetrate like they are ‘down’ for skateboarding” is available here now. Click through for more photos of the designer toys. 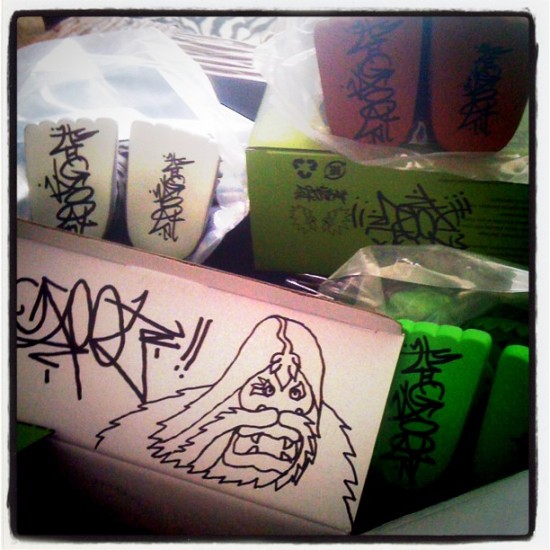 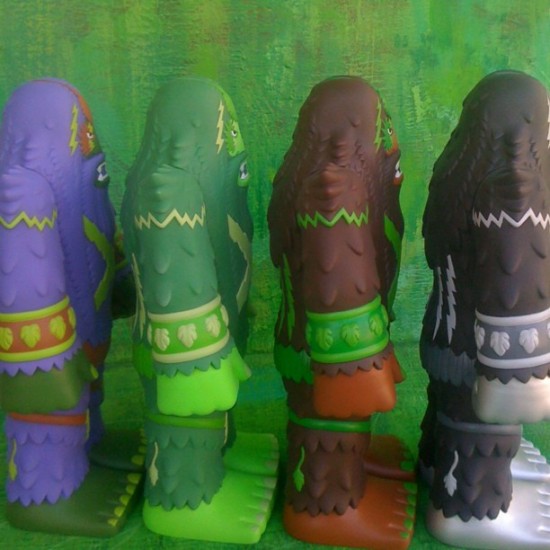 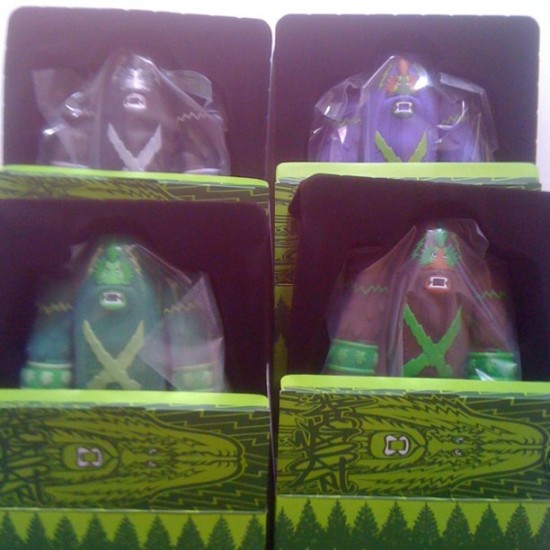 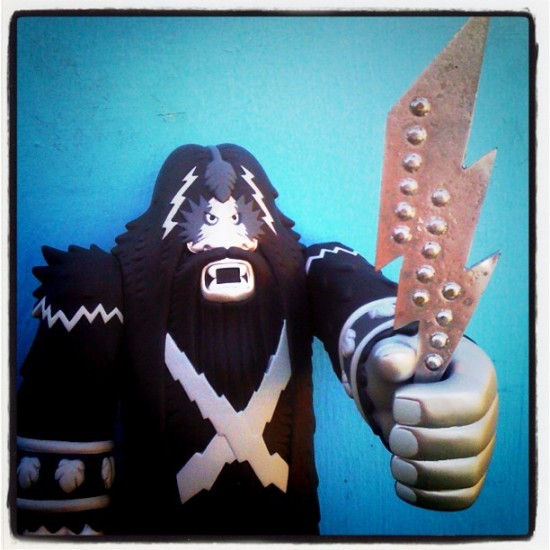