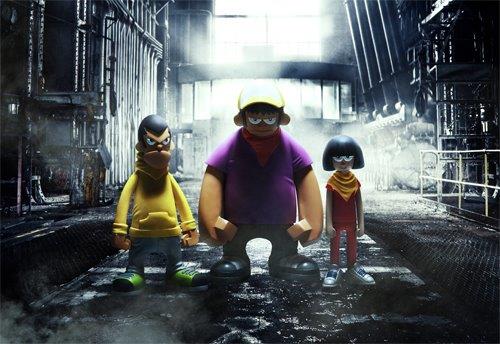 Jakarta, Indonesia based artist, Eric Liem, has started a new series of designer collectible toys that recall the heyday of urban vinyl. Liem’s “J-Town Urban Da ‘Crew” characters bring to mind the stylized streetwear aesthetics of urban collectible toys by Eric So, Michael Lau and Jason Siu. The figures were made to represent the street culture in Jakarta, and Liem cast the figures in resin. There are three characters to start, and more on the way. 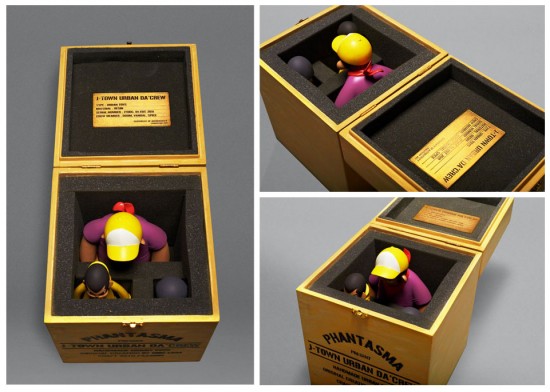 Props to Liem for crafting a handsome box for all three figures. The cost of the set is a very affordable ~$135 USD (+ about $80 shipping to the USA for that heavy, wooden box). If interested in ordering the collectible toys, contact Eric at viaphantasma.studio[at] gmail [dot] com. Click through to meet the J-Town Crew!

DOOM: “Scratchin’ to beats that are not from this world.”

DOOM works at a vinyl record shop, scratch DJ-ing at underground clubs part-time. He’s been in love with hip-hop ever since his late big brother, BIG-D, gave him his first Grandmaster Flash record. BIG-D also taught him to draw graffiti, which DOOM often does in his pastime. DOOM hasn’t been very talkative since his older brother died; some say he was killed by gangsters, but no one knows for sure.

SPICE: “Roll with me or get outta my way.”

Rollerblade skater. Freestyle rapper. Street artist. A sweet girl who lures you in, then kicks your ass. DOOM met SPICE in an underground hip-hop gig where she did a freestyle rap to the record he was spinning. They say she’s actually the daughter of the biggest triad in Jakarta, her father owning nearly the whole city. Story has it, she walks under the shadow of an invisible ninja—touch her and before you know it, your head will roll to the ground.

VANDAL: “You can’t catch me even on 24 frames per second.”

A crazy boy with ADD who can breakdance like nobody’s business, VANDAL is like an own brother to DOOM. Nobody knows where VANDAL works, although there are stories around of him secretly working with makers of military weapons and tanks. There’s reasonable proof that VANDAL actually has a superior IQ; he just can’t seem to focus on one thing at a time. “If you give him Rasta monsta, it’ll fast-forward him, like a bullet in full speed. Play games with him, and he’ll break the console.