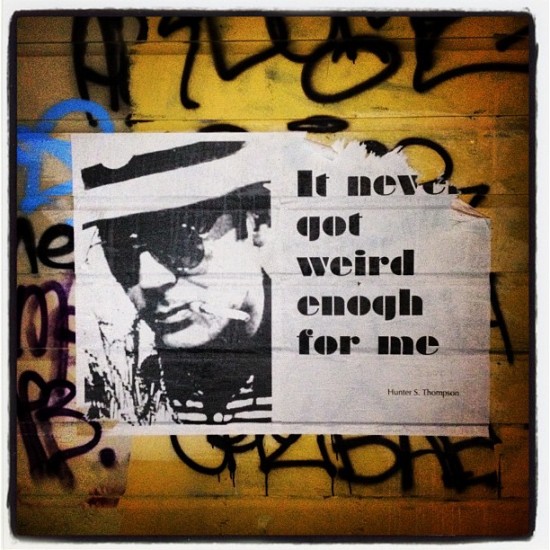 This typo in a wheatpasted Hunter S. Thompson quote caught my eye in The Mission last night. I really did think about adding a little grammatical caret (^) and letter U right then and there, but then, street art isn’t a manuscript for editing. Or is it? Lacking access to the artist, how was I to know if he/she was perhaps making a (still misspelled) reference to Enoch, ancestor of Noah? In the end, as the scent of urine wafted up from the ground, I realized I was thinking about it more than I needed to be. So I Instagrammed it. And kept walking.

what’s really sad is it never got weird enough for me. I moved to the country when the boat got too crowded. Then I learned that President Nixon had been eaten by white cannibals on an island near Tijuana for no good reason at all. Golly, you hear a lot of savage and unnatural things about people these days. Lazlo and Nixon are both gone now, but I don’t think I’m going to believe that ’til I can gnaw on their skulls with my very own teeth. Fuck those people, huh? If they’re out there, I’m going to find them, and I’m going to gnaw on their skulls. Because it still hasn’t gotten weird enough for me.

And here’s a cartoon I love from The Rut (with light augmentation) that I’ve been using on my Consulting page for years. 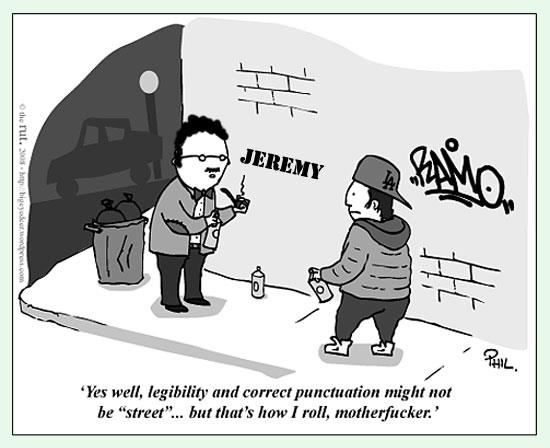