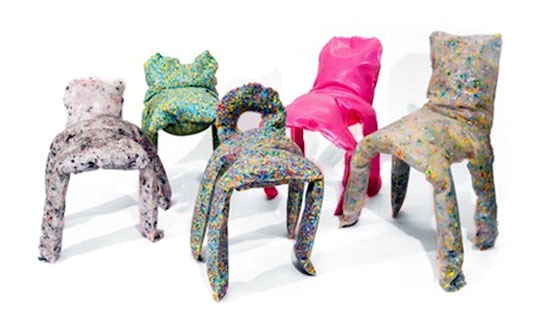 Frumpy Chairs are one-of-a-kind plastic seats designed by Canada-born RISD senior, Jamie Wolfond. Through an experimental process, Wolfond melds the polarized worlds of ‘hand-crafted’ and ‘plastic-molded’ to form unique and conceptual chairs. Because of that seemingly impossible pedigree, and due to the fact that “Frumpy Chairs” sounds like something you’d find at a ‘Shabby Chic’ shoppe, I’d like to openly suggest that these chairs henceforth be known as ‘Oxy-Moron Designer Chairs.’ 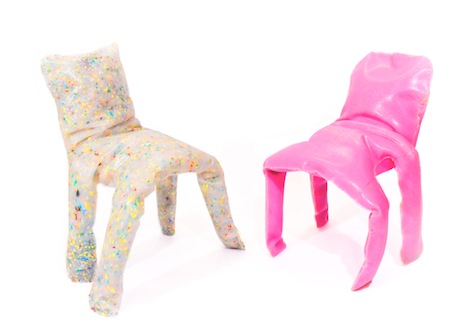 Wolfond made the chairs using 350 pounds of donated plastic regrind. Regrind refers to pieces of failed injection-molded plastic parts that would otherwise go to waste. (Come to think of it, regrind is kind of the opposite of D/struct.) 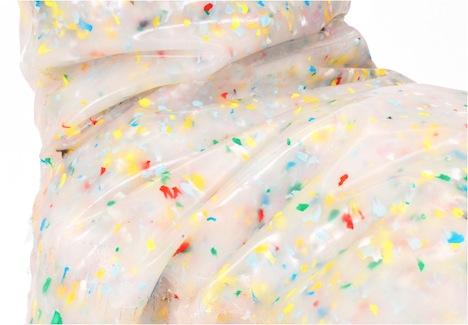 Wolfond poured the regrind into a fire-proof silicone pattern, stapled it together by hand and heated it to the plastic’s melting point in a pizza oven. After removing it from the oven, he slumped it over a chair shape to create the final unique form. He writes:

“Rather than forcing the material into the form, I create a set of variables and controls that would let the chair make itself.”

Fun, but isn’t anyone worried that if the chairs can make themselves, they’ll (be piloted by cats and) take over the world?