Filed under AWESOME. If you are a regular reader of this blog, you know that my adoration for animated gifs runs deep. There’s just something charming about the crude simplicity of the format, and its ease of use makes it a good platform for populist manipulation. As far as I’m concerned, the only fault of the animated gif is that when you’re away from your gadgetry, you’re also away from your gifs. PROBLEM SOLVED! 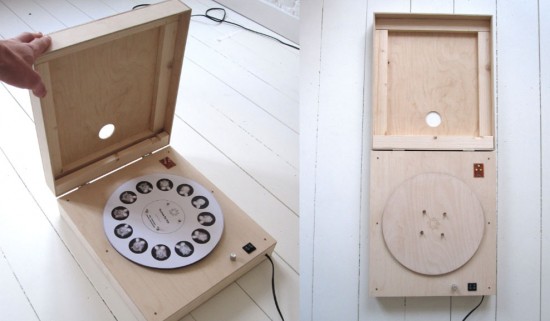 Antwerp-based designer, Pieterjan Grandry, has created an animated Gif Player. Looking like a wooden shower radio, his Gif Player spins your favorite little cat loops as if they were records on a turntable. Quoth Grandry:

In 1832, Jozeph Plateau, a Belgian physicist invented the phenakistiscope. The first device which was able to show a moving image and which is considered to be the pre-runner of modern cinema. The only down part however was the fact that it could only show short movie clips in a loop. An animated gif is exactly that, and after some research on Plateau’s original design, I succeeded to build a device capable of playing animated gifs, incorporating led lights, microchips and magnetic sensors. The Gif player is a wooden box, much like a turntable, with a dimmer to adjust the speed of the animation and a small looking hole in the front.

I wonder what Viewmaster Discs would look like on the Gif Player? [You might also dig reading about outmoded electronics as neon papercrafts and dead tech as toy art.] Click through for another gif of a cat on the Gif Player.