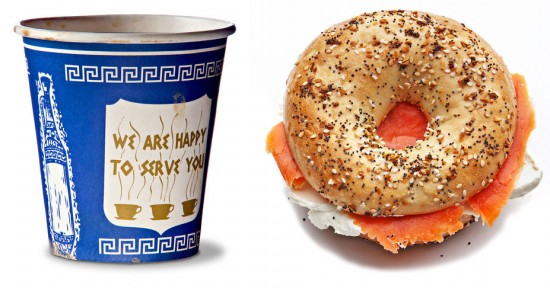 Inspired by “A History of the World in 100 Objects,” the British Museum’s BBC radio series and book, The New York Times recruited historians and museum curators to identify 50 objects that could embody the narrative of New York. They quickly point out that in a city of such magnitude as New York, their list of 50 objects  “can only be a history and not the history.” You can find the full list here and join the 600+ people who have already added their 2 cents about what got left out here. These are a few of my favorites.

Above left, The Greek Coffee Cup: “The Anthora, as the cup was called, was created in the early 1960s especially for the New York market and its ubiquitous Greek diners and delicatessens by Leslie Buck, a Holocaust survivor.”

Above right, The Bagel: “No other food is so associated with New York as the ‘Jewish English muffin,’ which spread from the Lower East Side in the early 20th century.”

Above left, The Metro Card: “MetroCards became emblematic of a modernization program that included signs alerting riders to waiting times, progress on a Second Avenue subway and the extension of the Flushing line on the West Side.”

Above right, Checker Taxi Cab: “More people use mass transit in New York than in any other American city. But no other city is so dependent on taxis. They came in all colors until 1967, when city officials required that taxis be painted yellow.”

Above left, Saturday Night Special: “When import laws were tightened in 1968, it spawned a cottage industry that produced millions of pot-metal weapons — made from an alloy of copper and lead — that sold for as little as $5. They were dubbed “Saturday night specials” because they were often brandished in weekend domestic disputes as well as in other crimes.”

Above right, AIDS Button: “New York City’s health department describes New York as the nation’s epicenter of H.I.V./AIDS. Today, about 100,000 New Yorkers are living with the disease, thanks to advanced medicines.”

Above left, Tonight Show Audio Track: “The first commercial television licenses were issued to NBC and CBS stations in New York in 1941 and the city quickly became America’s television capital.”

Above right, Boom Box: “When bigger was better, the suitcase-size boom box was a necessity for big-city teenagers. In the 1980s, sales nationwide topped $20 million a year.”

Above left, The Phantom’s Mask: “Musicals have been popular since at least 1915, but none ran as long, made as much money or attracted audiences as successfully as ‘The Phantom of the Opera,’ by Andrew Lloyd Webber, which was imported from London and opened in New York in 1988.”

Above right, 9/11 Dust: “Sept. 11, 2001, began beautifully, a stunning day on which New Yorkers were voting on mayoral nominees. Within 104 minutes, two jet planes hijacked by terrorists toppled both towers of the World Trade Center, defining a decade and leaving a grim legacy that took many forms. Among them, a jar of dust collected by museum curators at ground zero.”