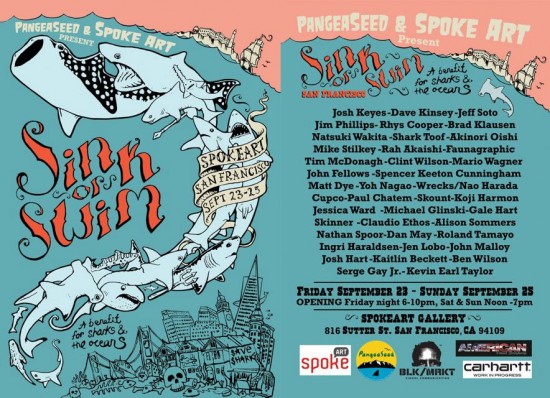 It seems that art shows like PangeaSeed‘s Sink or Swim always happen in LA, so cheers to Spoke Art for hosting this one in San Francisco!

Japan-based non-profit organization, PangeaSeed, in collaboration with Spoke Art, is pleased to announce our inaugural transcontinental art exhibition, Sink or Swim, featuring original works from 30 internationally renowned artists such as Dave Kinsey, Josh Keyes, Dan May, Jim Phillips, Jeff Soto and many more. This gathering of widely acclaimed artists from around the globe will address one the biggest threats facing the health of world’s oceans today – the rapid and mass depletion of sharks.

Much like the somewhat clueless couple depicted in this video, I had little knowledge of what shark-finning meant. Well, it’s a straight-up barbaric form of torture that 100% of the time results in the shark slowly bleeding to death or drowning. Do the people who consume shark fin soup (Japan), fish and chips (England) and unproven health supplements (America) not know or just not care?

PangeaSeed is dedicated to educating and raising international awareness on the plight of sharks by creating an open dialog with the global community and developing an understanding of the need to preserve and protect sharks and their habitat.

Sink or Swim is not only a reference to the cruel practice of finning but also a reference to our relationship with the oceans as a whole. We are living at a crucial time in terms of sustaining the oceans. We may sink and fail, or we may find a way to succeed and swim. 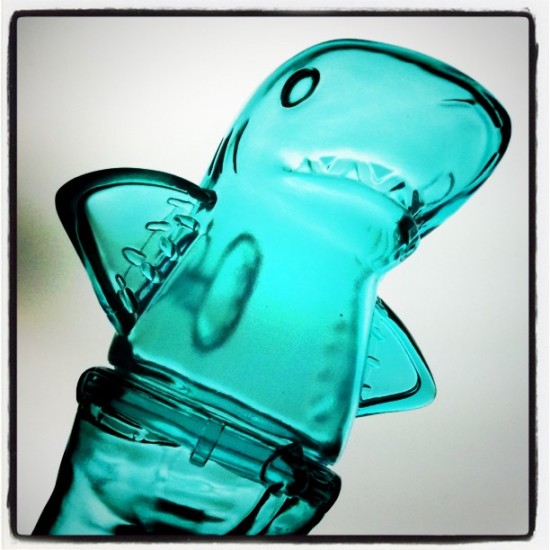 Here’s a pic of a Sametan designed by Koji Harmon and sculpted by Kiyoka Ikeda of Gargamel. Sametan will make his debut at Sink or Swim and every subsequent Sametan release will benefit PangeaSeed.

With reconnected fins, shoes, jeans, and a fancy spade belt buckle, Sametan is here to help spread the word about the plight of sharks worldwide.The debut release is cast in beautiful crystal clear blue vinyl, unpainted, and is limited to 25 pieces. 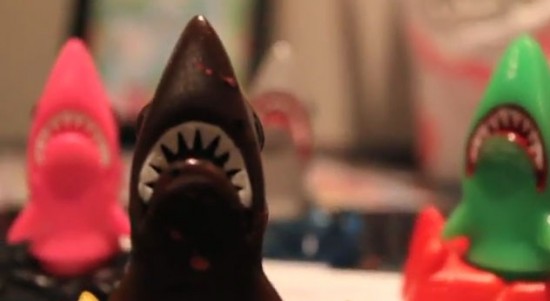 I’m not sure who made the 3D sharks above. I grabbed them from the video of July’s Sink or Swim exhibition in Tokyo. Click here to read more about PangeaSeed and Sink or Swim. See you at Spoke Art!