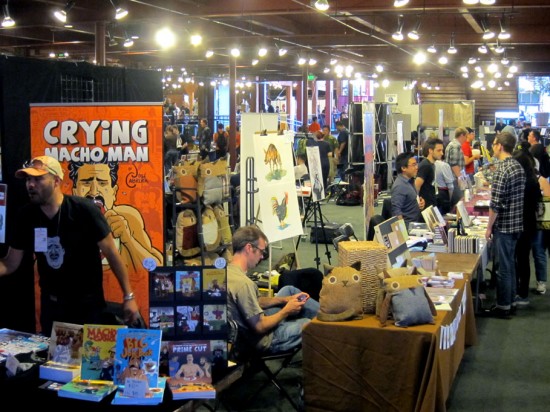 This past weekend, the Alternative Press descended on San Francisco. Alternative Press Expo (APE) is the country’s largest alternative and independent comics convention. It’s like a mini-Comic-Con celebrating two-dimensional ephemera, 3D crafts and miscellaneous geekery with no corporate blockbusters and gaming giants allowed. I stopped by on Saturday, and here’s what caught my eye. 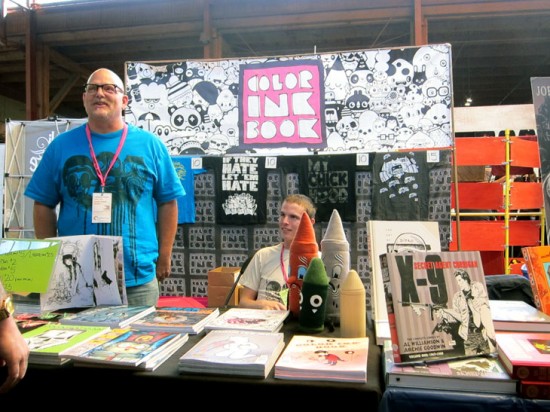 Color Ink Book was my first stop. In addition to coloring books with drawings by contemporary artists and Lurker figures by Skinner, they had Rayola mascot plushes by Travis Lampe and Steff Bomb. 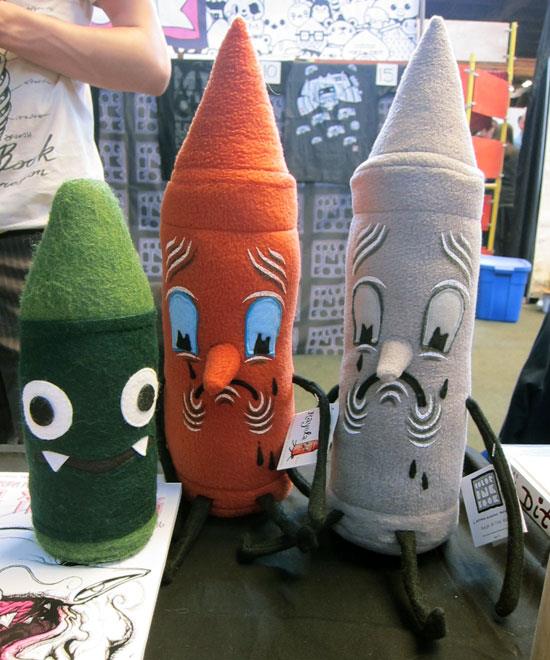 They were offering the plush crayons at great prices. Adam Washburn said that APE is where Color Ink Book really got its start, so they wanted to give back to the fans. Nice. 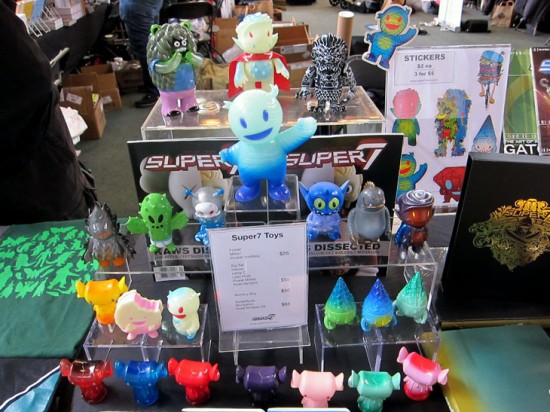 San Francisco’s Super7 represented with a spectrum of vinyl toys and back issues of their old “mook”. 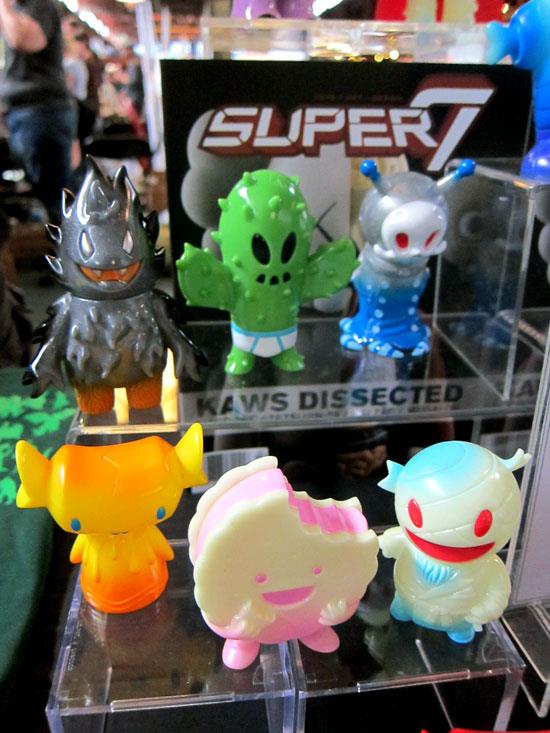 The newest releases on display included the Charcoal Flame Honoo by Leecifer (above at top left) and the Skulletor Milton (not shown). 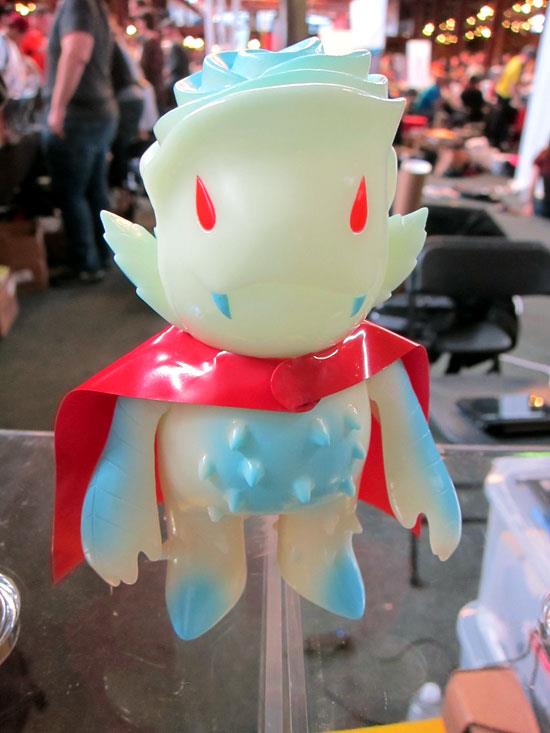 I hadn’t seen Josh Herbolsheimer‘s Rose Vampire DX since its SDCC debut. It’s just like the previous RV only bigger with a cape and articulation! 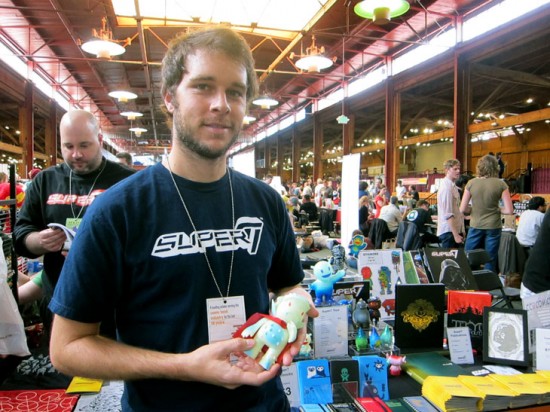 You can kind of get a sense of the scale of the “upgraded” Rose vs. the Monster Family RVs when you see it in Josh’s hands. 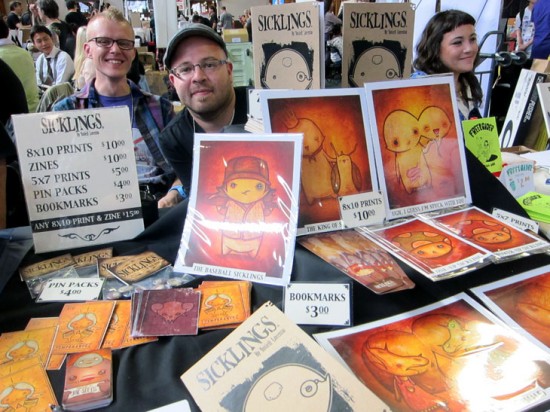 Oakland’s own Yosiell Lorenzo brought out the Sicklings for APE, including his new zine. 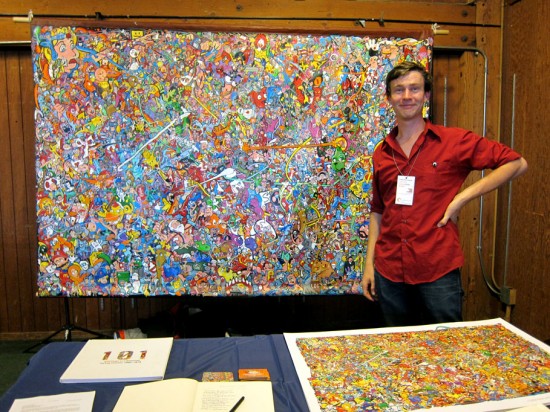 This is Ray Sumser and his 9-foot wide, 1,546-character 2009 painting called “The Comicosm”. After moving to San Francisco, Sumser began a new, bigger painting with a goal of 2,000 “broadly recognizable” characters called The Cartoonuum. He currently has a Kickstarter for this project. 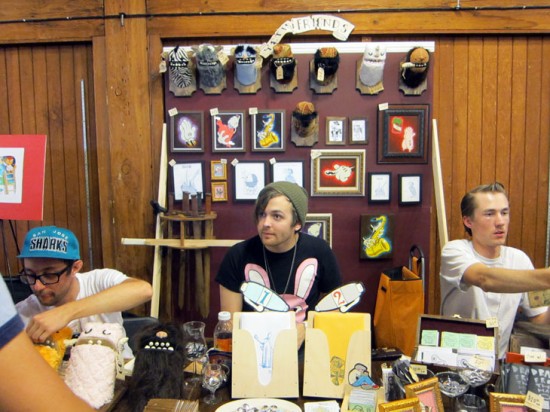 For some reason, when I glance just quickly at this picture, I think of the West Memphis Three. (You know what I mean?) But really, it’s Idle hands paint, Yetis & Friends and Matt136. 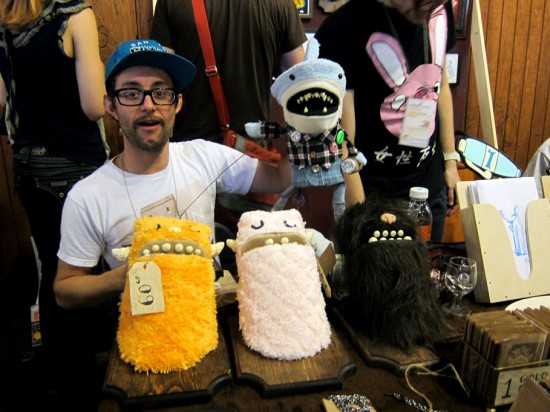 Conventions can sometimes have a fleamarket vibe. You’ve gotta work the crowd. 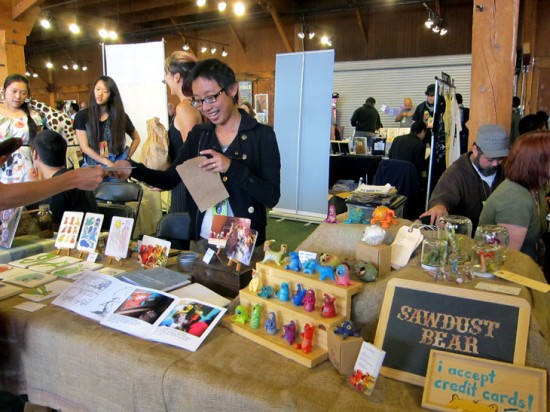 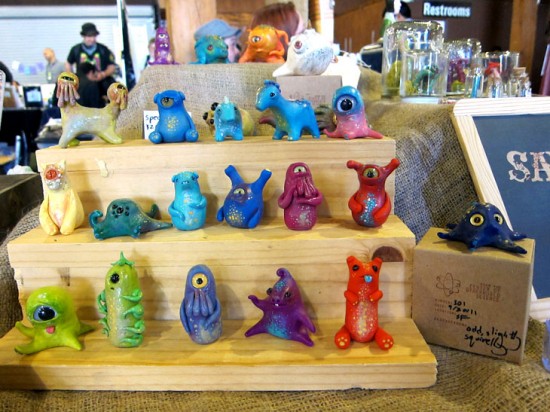 All of her monsters are one-offs, but you can find the occasional creature, postcard or specimen in her etsy shop. 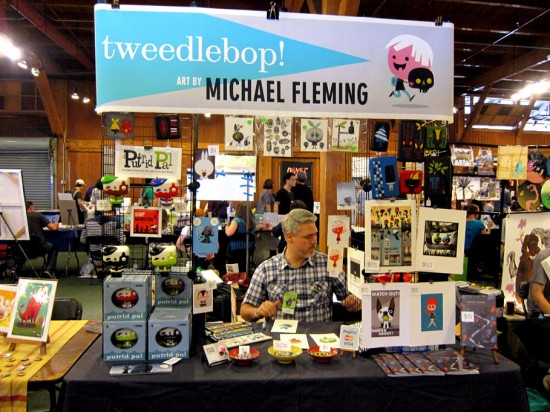 I see Michael Fleming once a year, which is kind of ridiculous when you think about how close we really live to one another. The creator of the Putrid Pal vinyl toy is currently working on a children’s book. 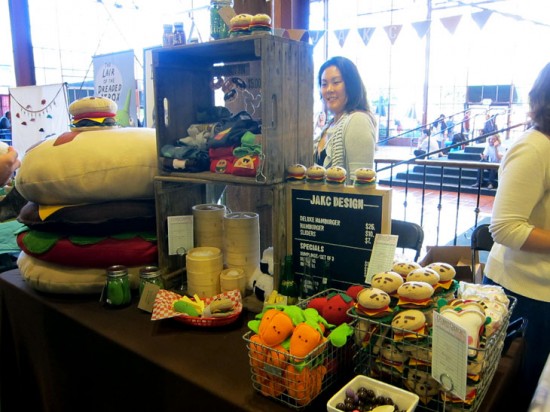 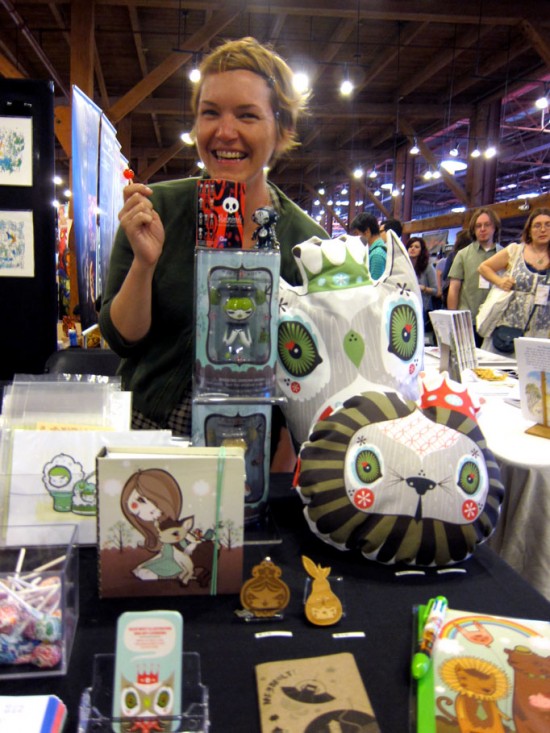 Julie West is stoked because she has her own branded 10-color pen (foreground at right) that also features a switchblade, lipstick, blowtorch and poison pellet. This is all true. 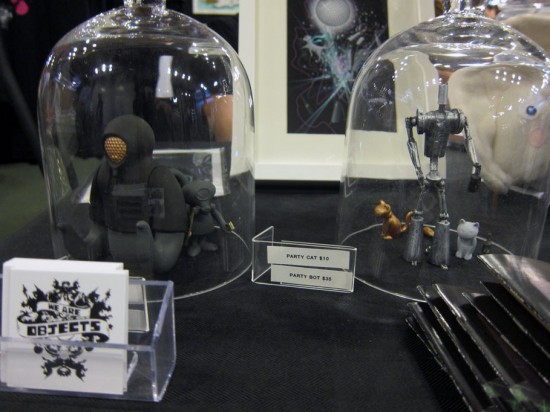 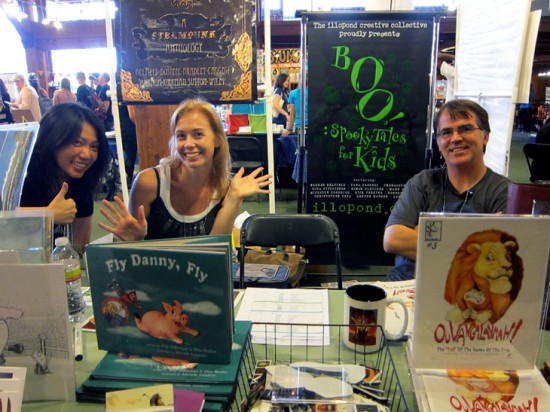 Besides buying eclectic things I don’t actually need, the best part of going to conventions is meeting people I wouldn’t ordinarily meet. While I was walking past the Illopond table, I was flagged down by Charlotte Cheng (illustrator, at left) in one of the few moments I’ve been recognized on behalf of my blog. Next to Charlotte are illustrators Michelle Kondrich and Denver Wagner. They’re all part of an illustration collective that’s “a place to collaborate, discuss and share professional illustration, from a creative and business perspective.” The toy art scene could really learn from that. Anyway, bookmark their sites and check out their spooky and steampunky books! 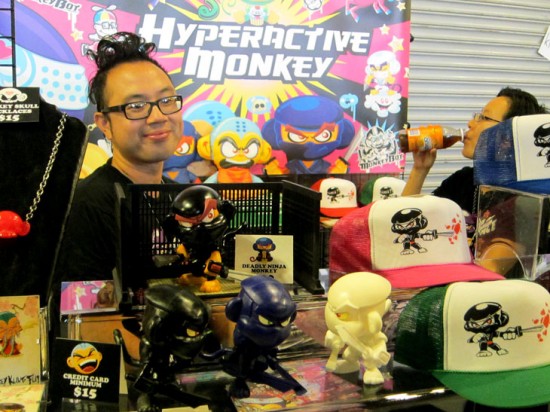 I see Hyperactive Monkey at all the Cons, so props for that. Unfortunately, I think the style comes across a bit dated or less-than-fully-inspired. But at least they’re out there trying to make stuff happen, right? 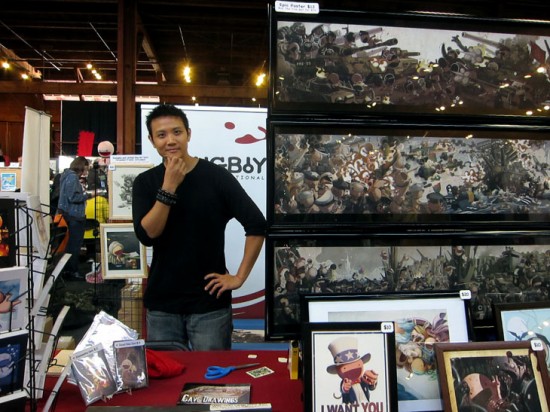 I spotted a noose-necked plush prototype at the back of Pao’s HANGBoY booth. (I have incredible toy radar.) 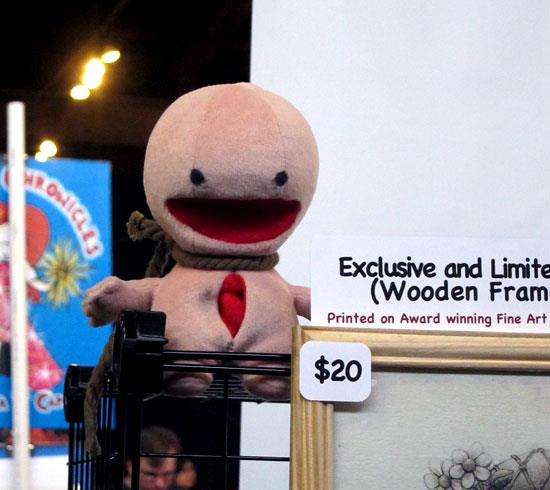 Pao is currently working on both plush AND vinyl prototypes. His illustration work and postcards are interesting and edgy. 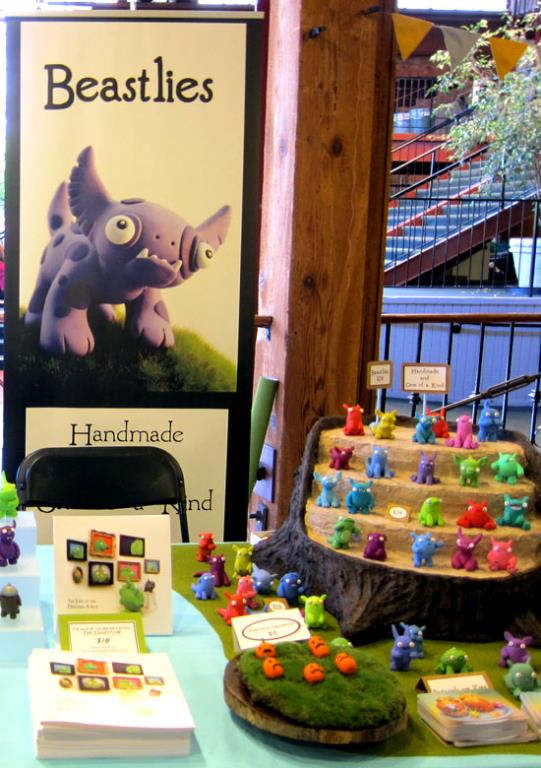 I missed seeing Leslie Levings at the Beastlies booth, but many little polymer clay monsters were representing for her. 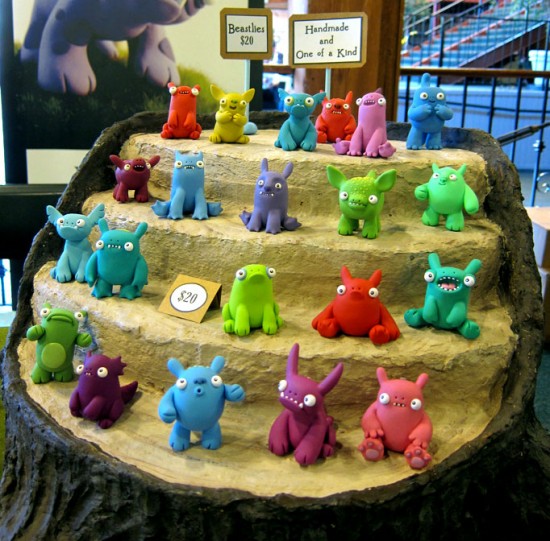 Any Beastlies that didn’t get adopted at APE will likely find their way into Leslie’s etsy shop. 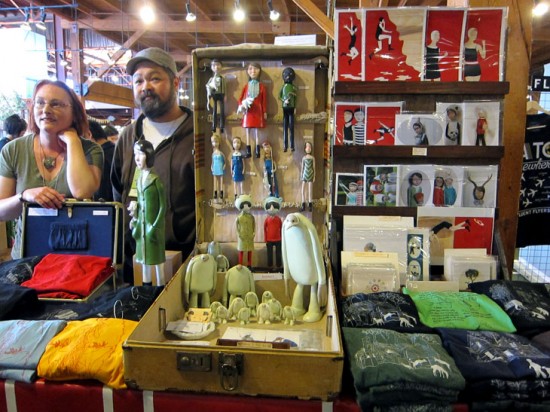 Doubleparlour is Ernie and Cassandra Velasco. They live in San Francisco and make art together. 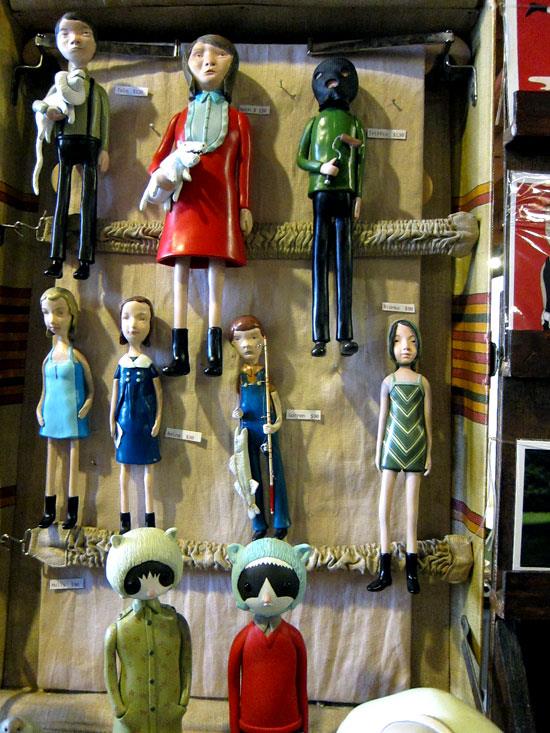 Next time I see them at a Convention, I’m going to buy something from that suitcase. You can find currently available sculptures, prints and shirts in their etsy shop. 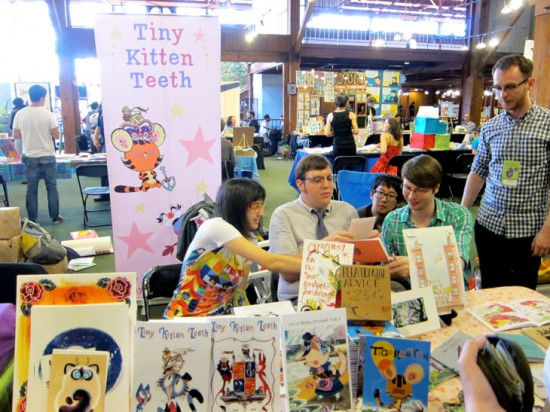 Tiny Kitten Teeth is Becky Dreistadt & Frank Gibson. I didn’t know they’d be making an appearance at APE, so it was good to meet them. I’ll be doing an interview with the duo soon in anticipation of their first toy release at the upcoming Designercon. 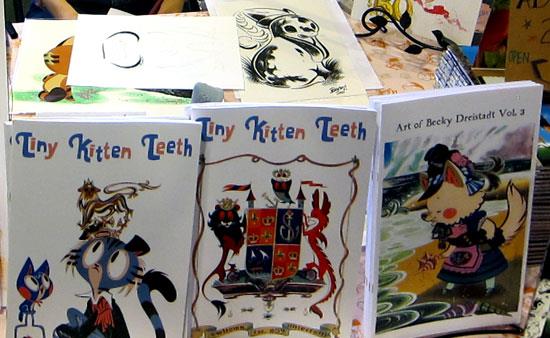 Thanks to Last.fm, I’ve just come to find out that Frank and I have “highly compatible” music taste. Nice! 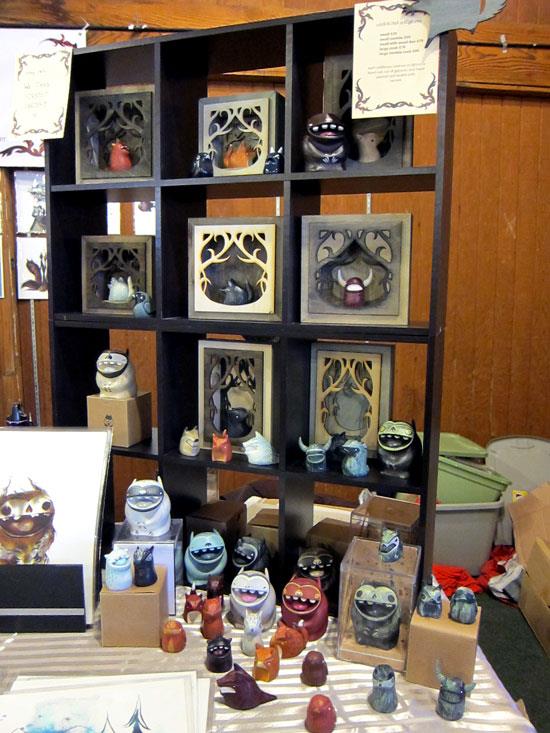 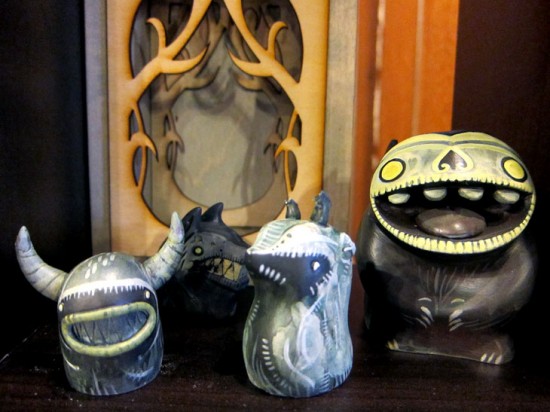 Gypsum is an interesting alternative to resin. You can pick up one of the Oddfauna sculptures on Sancartier’s etsy shop or check out The Beast Parlor, opening October 14th at the Lower Haters Gallery.

This is Jen Oaks. She sold me my most unexpected pickup at APE: 10 Twin Peaks pin packs. From Laura Palmer to the Log Lady, she covered the crucial characters, while not wasting any button supplies on the Jameses and Donnas of the show.

Somehow, I forgot to pick up a BOB pin pack! Luckily, you can get all the Twin Peaks buttons in her etsy shop. The illustrations and quotes are great. More Twin Peaks merch please!

See you next year!