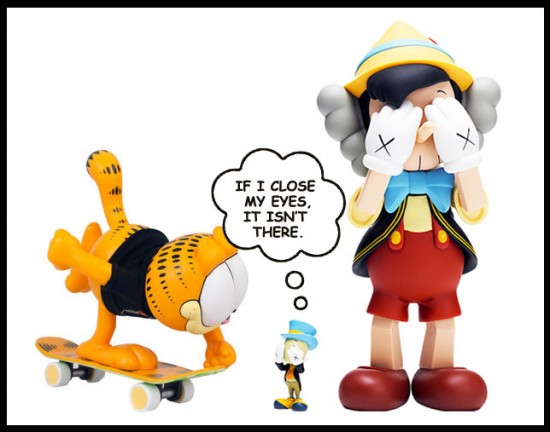 I was trying to stay out of this one, owing to higher priorities, but then Tomopop had to go and pose this question:

Since when is Garfield any different than a creation a vinyl artist came up with?

Well, if one accepts the (increasingly slipping away) parameters that designer toys grew out of urban and lowbrow subcultures, then you only need Wikipedia to know why Jim Davis is not of the same artistic movement as James Marshall (Dalek).

I hold no grudges against Garfield. (When it came to orange 80s cats though, I preferred Azrael of Smurfs fame.) Speaking of retro, this figure, produced by streetwear brand, The Hundreds, and designer toy company, The Loyal Subjects, calls to mind, Nerfuls on Wheels, a Parker Brothers series I dug as a kid.

I think therein lies the problem. To people who’ve been collecting designer toys for a while, this Garfield figure is about 5 years too late to the vinyl hype party. As a result, rather than seeming edgy or innovative, it just kind of hangs there a bit awkwardly, like Garfield himself, looking hungry.

How is this Garfield different from other cross-pollinations of designer toys and cartoon characters? In the case of Ron English’s “Grins” series, the artist is using everyone from Charlie Brown to Teletubbies to express irony. Kaws’ recent Pinocchio (shown above) is, to me, part of the same self-reflexive “let’s see what I can get away with” joke that brought us shit-on-a-stick toys a couple years back.

The newest Garfield figure isn’t saying anything to me. The only conversation it generates is probably one that happened a while ago in a room in LA:

Pre-orders begin Monday on The Hundreds’ and The Loyal Subjects’ websites. Stay tuned for Ziggy on BMX.