An anonymous tipster at a reputable art toy company emailed me about this Dylan Sprouse toy. Toys, pop culture, scandal…you know me so well.  I got to work immediately.

You can read the title of this post as highly inspirational or further evidence of a genre’s demise. I’m just the messenger. Sprouse Arts is the nom de guerre of Dylan Sprouse, a young actor famous for starring alongside his twin brother in the Disney Channel sitcoms The Suite Life of Zack & Cody and The Suite Life on Deck.

For those about to hate, tell me why? Is it that these are Monskeys (already a tired retread of many earlier incarnations of toy monkeys) with a parasite from the pages ofInstinctoy’s Inc Bear? Or is it that the designer has a Disney pedigree, an 80-page special issue of People magazine and more money than you could dream of? If your angst is about the former, welcome to the current era of “designer toys,” and note also that young Sprouse may have little to no knowledge of the Hong Kong and Tokyo-based toy artists whose characters his resemble.

If you’re upset about the latter, I hear that, but we should be careful to avoid hypocrisy. For instance, 11-year old Cooper Berella curated a paper toy show with Luke Chueh, Yoskay Yamamoto and Shin Tanaka at Munky King this past weekend. 9-year old Cohen Morano has already been published by Chronicle Books, with The Rest is Up To You, a project where he collaborates with Mark Ryden, Barry McGee and Shepard Fairey. Let’s also not forget Tiger Lily Biskup who shows work alongside her dad at art galleries… Like many things in life, the art world is, among other things, about who you know. 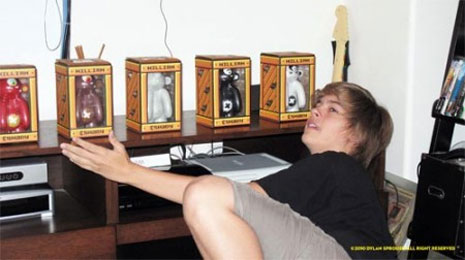 My full story (plus a link to where you can buy these toys) is here.