Tynies-branded Pecanpals is interesting on dual fronts: 1) Noferin continues to avoid the toxicity of vinyl by making their Pecanpals in sustainable wood, plush and now, glass. 2) Partnering to create a Tynies collection is a real move away from “designer toys” into mainstream “family” collectibles.

A trio of Noferin Tynies will be available at SDCC 2011 as an exclusive from DKE (booth #4728). There will be 200 sets in the GID colorway for $15 a set. It’s hard to tell what they look like in these pictures. Kind of trinkety.

You’ve seen the Tynies collection before. You’ll find them on display at gift shops or souvenir shops. They’re tiny, colorful, cute, shiny and inexpensive. In that regard, Tynies are not unlike Dunnys, except for the fact that someone decided that Dunnys were “cool” and “urban” and Tynies are for kids and single women who have run out of room for their Beanie Babies. 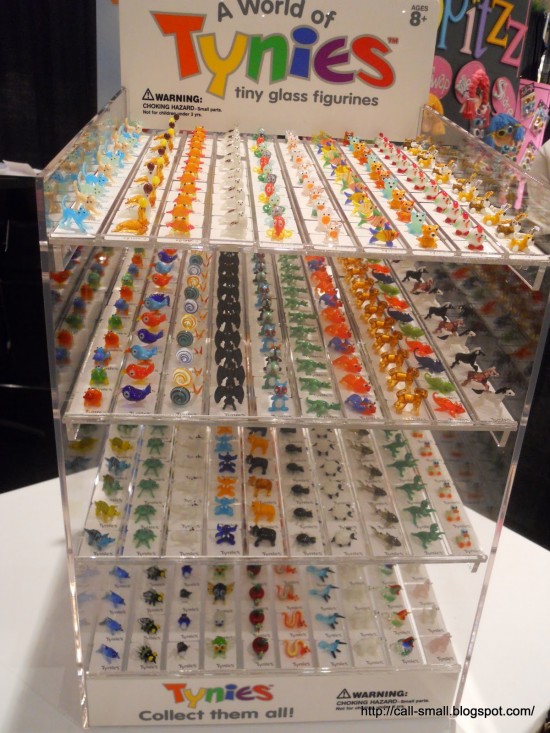 It never occurred to me before to look into who makes Tynies. For such ubiquitous, baubles, I guess I assumed a pretty big corporation was behind them. Well, that’s not the case.

The Tynies website could probably use an overhaul. (Clicking the Facts heading in Chrome results in an illustrated sun rotating around a blank frame with no text.) As for the physical location of Tynies, it’s located in Glendora, CA at “the end of the Cult-de-sac.”

The Patch Network site for Glendora has this to say about Tynies:

While I like the idea that Tynies is such a small company and that its employees are “professional and knowledgeable,” in America, the phrase “strong family structure” is unfortunately often tied in with the religious right. I hope I’m religious wrong about that.

Anyway, the Noferin Pecanpals Tynies collection is cute, in a cheap whatnot kind of a way. I’m definitely going to hit up DKE to say hi to Dov and Sarah Jo and check them out.