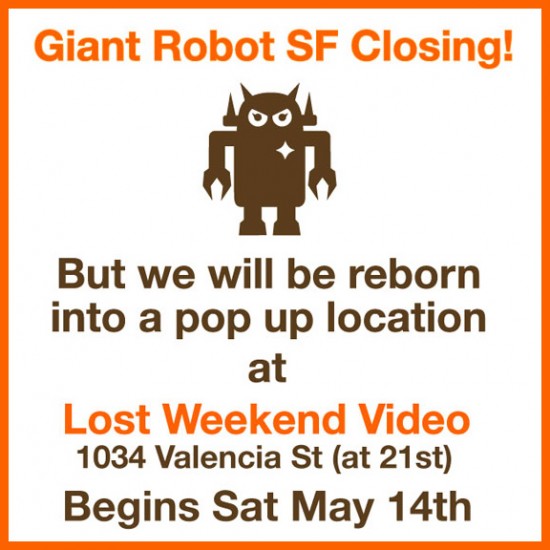 Not shocking, but sad nonetheless: San Francisco’s Giant Robot will close its doors in the Upper Haight on April 26th. I’d been in there a couple times recently when there was very little merchandise. Each time I inquired, I was always told something about how they’d just been cleaned out by a large crowd, which did seem a bit circumspect. Now the truth comes out…?

Giant Robot SF has been operating within a stone’s throw from Amoeba Records for 8 years. Because the Upper Haight can be an abominable place to visit, it was nice to have multiple destinations. Kidrobot also has a store on Haight, and I think competition between the two toy culture stores in the mid-2000s was rough on Giant Robot. There was also a pretty public plea for funding for Giant Robot’s magazine in the late 2000s. They should really try this on Kickstarter.

R.I.P. GRSF. I’ll check out your pop-up shop, and I’ll miss you on Haight.