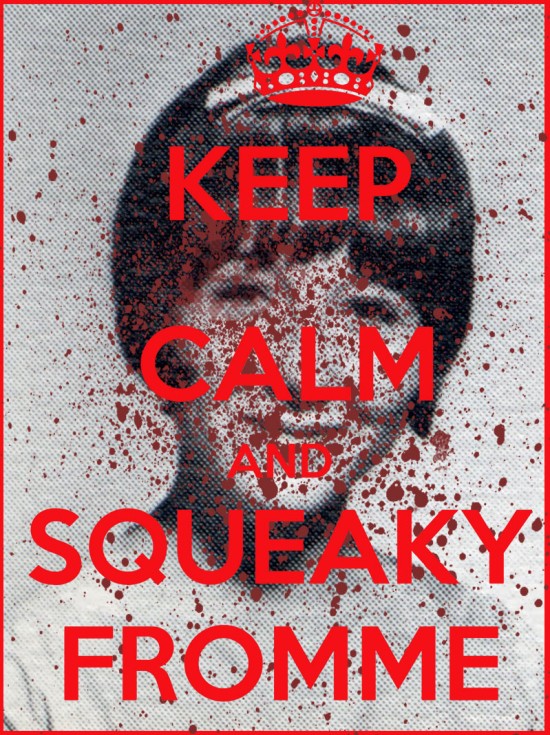 You know those Keep Calm and Carry On posters that seem to be everywhere? Well, Frank Kozik isn’t the only one who can make absurd propaganda. I’m not exactly saying that chaos equals progress, but I am saying that if you sometimes find it hard to sit still and be patient, you might as well channel your frustrated energy into propadada™…

Keep Calm and Carry On was a propaganda poster produced by the Government of the United Kingdom in 1939 during the beginning of the Second World War. It was the third in a series of three posters, following “Freedom Is In Peril. Defend It With All Your Might” and “Your Courage, Your Cheerfulness, Your Resolution Will Bring Us Victory”. The posters were all designed by civil servants and have since entered the public domain, where they live on in the form of doormats and coffee mugs.

Squeaky Fromme was a member of the Manson Family who served 34 years in prison for attempting to assassinate then-president Gerald Ford. In the 1993 Richard Linklater film, Slacker, the “Masonic Malcontent” character suggested putting Squeaky Fromme on the one dollar bill. Fromme was paroled in 2009. I put her on a Keep Calm and Carry On poster.

Does it mean anything, or is it just a rhyme that got stuck in my head?

Make your own Keep Calm and Carry On poster here: http://www.keepcalm-o-matic.co.uk.