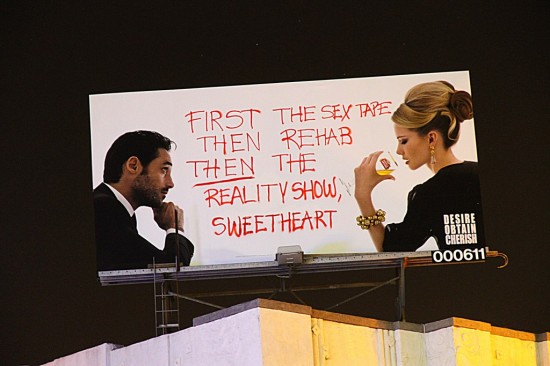 I just came across this amusing billboard hijack by the [previously blogged] Desire Obtain Cherish crew, and it resonates with some thoughts I’ve been having about reality TV and pop culture and Warhol’s whole 15 minutes ideology.

One of the top 20 keyword searches that brings readers to my blog is “sucklord girlfriend”. Isn’t that wack? (Not as wack as being tall though.) People who follow our shenanigans on Twitter may know that The Sucklord (@SUCKLORD) has ‘OK’d’ an interview between The Sucklord’s Girlfriend aka Sam (@needleknocker) and me (@jeremyriad). It will have nothing directly to do with any recent reality television shows on which any of us may have appeared. But people are searching for her, and tweeters are asking for an interview, and I love asking interesting people provocative questions, so it shall happen.

That said, I can’t help thinking about how our notion of ‘celebrity’ has changed so dramatically. We’re also now living in a time where mere proximity to so-called ‘celebrities’ can often be enough to get you your own 15 minutes of fame. I mean, wasn’t Kim Kardashian just Paris Hilton’s friend until she made that sex tape? And now look at her. Or actually, don’t. Her 15 minutes have gone on so long, it’s like Groundhog Day in Hell.

Anyway, for what it’s worth: Sucklord, Sam, you’re going about your fame out of order here. But it’s all good. Blaze your own path. Or just blaze something.