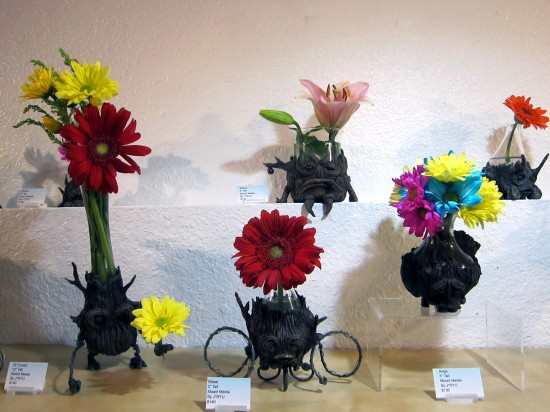 Critics critique and collectors collect. I like to do both. Under the right circumstances (when the moon and my bank account are in alignment) the highest compliment I can pay an artist is to pay that artist. This is precisely what I did on Saturday night at Vinyl Roots, a show of one-off and limited edition art objects by J★RYU, Kevin Gosselin and Troy Stith at Dragatomi in Sacramento. 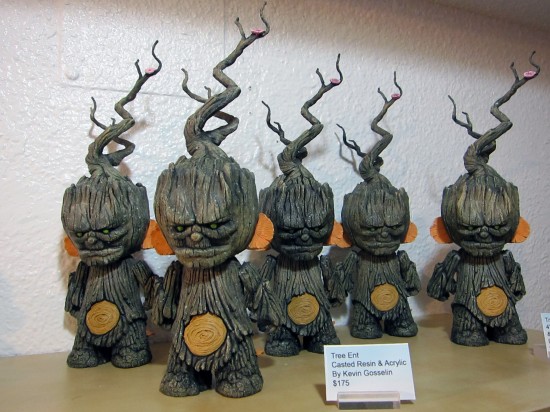 These three artists are part of a new wave of toy customizers who are working to (literally) change the shape of customs as we know them. Rather than use an existing toy platform as a jumping off point, J★RYU, Gosselin and Stith see the vinyl as more of an armature. Kidrobot’s Munny or Toy2R’s Qee may be at the root of the sculpture, but it’s often completely buried and obscured. I anticipate that J★RYU, Gosselin and Stith will eventually abandon the platform entirely or perhaps continue to sell customs and multiples in order to fund the production of original work. 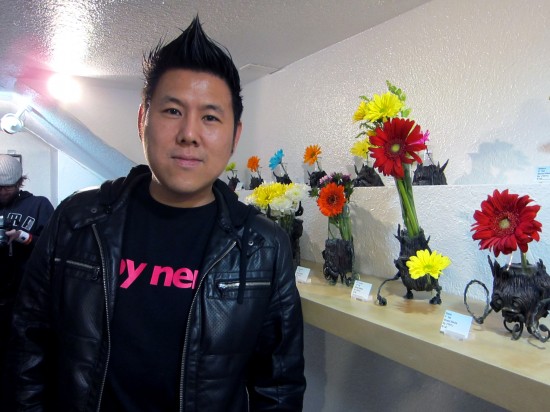 Jet-set J★RYU flew in for the opening. I hadn’t spoken to Jesse since a conversation where I expressed my opinion that talented sculptors ought not to need DIY toys in their works. Jesse continues to customize toys, but the body of work he created for Vinyl Roots was an exciting departure: More roots than vinyl! 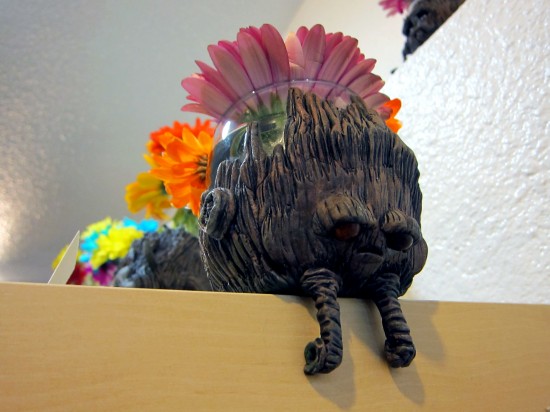 All of J★RYU’s creations for Vinyl Roots fit conceptually and texturally within his existing universe, but he moved from framing them as toy art to design objects. He did this in a couple ways: He made the characters functional. Each one is a vessel. He found ways to integrate them with their surroundings. Some have legs that hang over shelves, for instance. The result is a wonderful interplay of the synthetic with the organic. 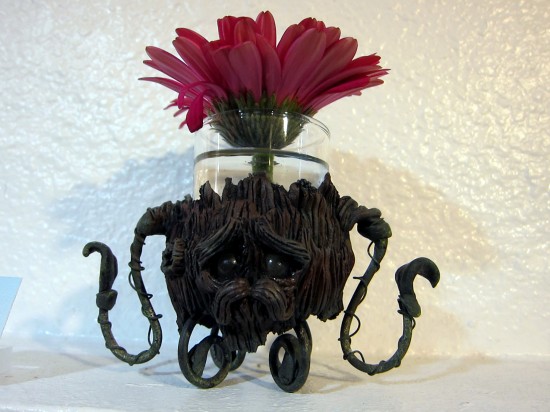 The vessels are made of clay and wire. Flowers represent souls. An older character is marked by a larger number of flowers. Younger ones carry just a singular stem. Jesse sculpts from scratch without initial sketching. On the technical side, his faux-tree texture is top notch. 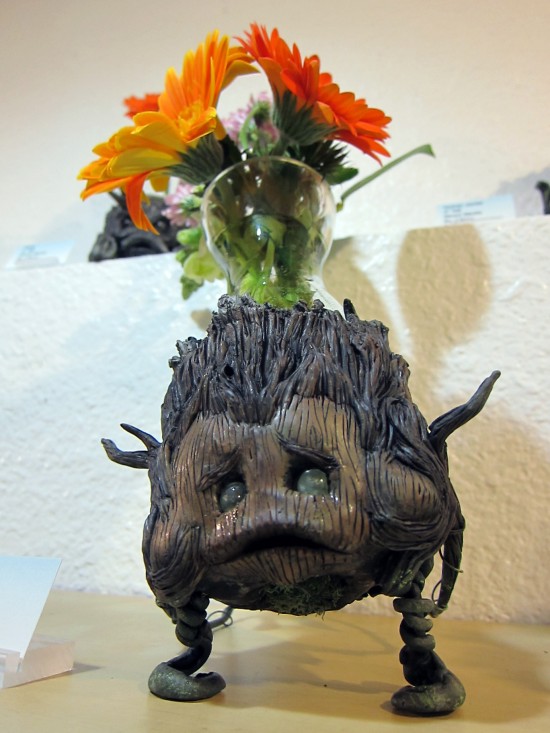 But it’s the faces that stir an emotional connection. We played an interesting game in which Jesse told us the personalities of our favorite pieces after we’d made our selections. Dog-loving Matt Hisey chose Gohan Jones, named after Jesse’s dog. I chose Bertram, who Jesse described as “inquisitive.” Very interesting, huh? (I’m looking forward to putting some Nepenthes in Bertram’s vessel when he comes home after the show!) 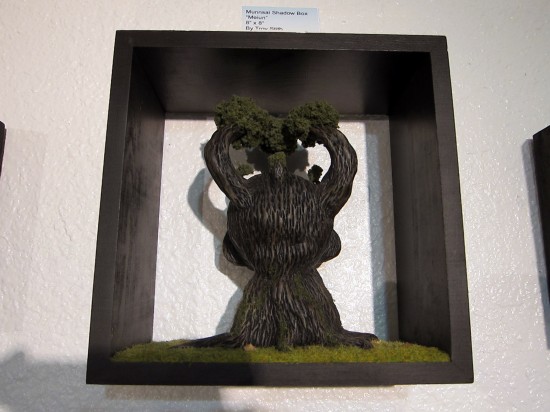 Troy Stith was unable to make the trip to Sacramento, but he submitted eight works that continued in the “bonsai” style we have seen from him. He set his Vinyl Roots pieces in a story, entitled The Wanderer. The tale is a first-person narrative about a journey through the “Caverns of Yandor to the great lands of Maroneen”. 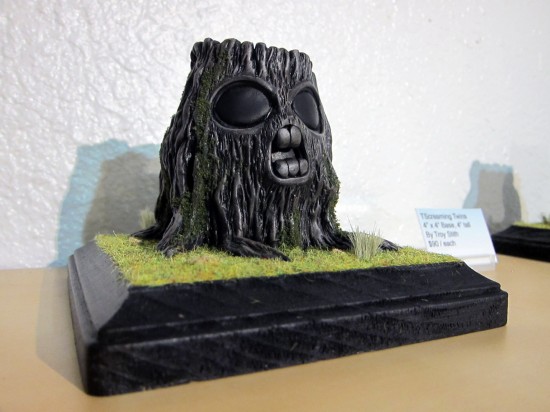 If I were to suggest that The Wanderer reads as kind of Lord of the Rings-y, that could mean different things to different people. For collectors who are fans of the sci-fi/fantasy genre and appreciate organic-looking art with a touch of Asian influence, Stith has you covered. 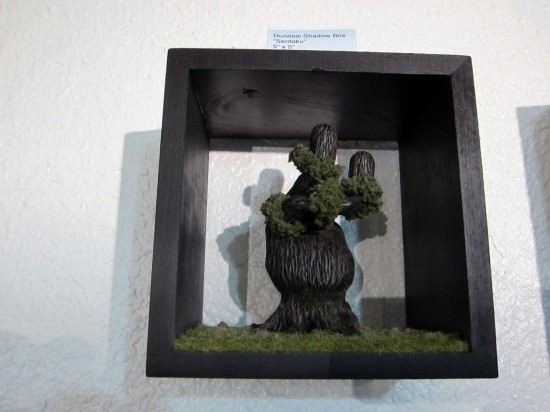 For me, I see the work as being technically skillful, but lacking that je ne sais quoi responsible for connecting with its audience. Stith knows texture, but I’d like to see him work on character. The “wretched faces” of The Screaming Twins could use a tweak to make them seem caught more mid-“wail” as they’re being cut down. In the story, Stith writes that the trees of The Daven Forest “seem to be watching you walk through their land,” but his tree sculptures lack eyes. 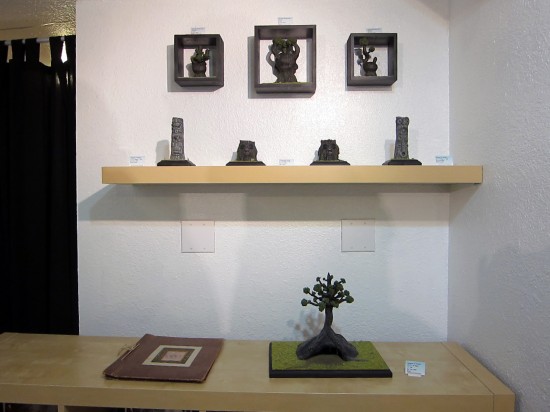 To be fair, Troy was at a bit of a disadvantage because he wasn’t present for the show. It’s a fact: an artist’s palpable charisma can elevate one’s perception of a good sculpture to a great sculpture. 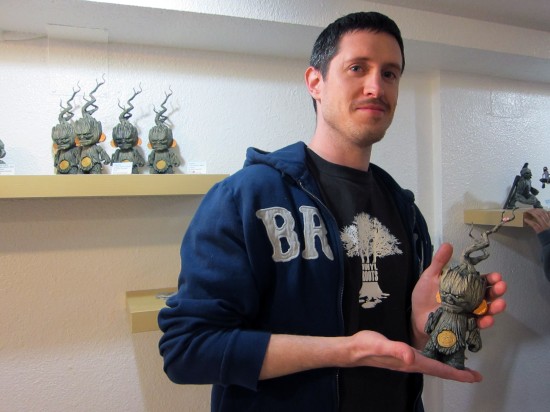 Kevin Gosselin drove down from the Pacific Northwest for the opening of Vinyl Roots. In a relatively short time, Gosselin has risen to the ranks of the most talked about toy customizers. His skill level is undeniable. I was glad to have a chance to see some of his work in person. 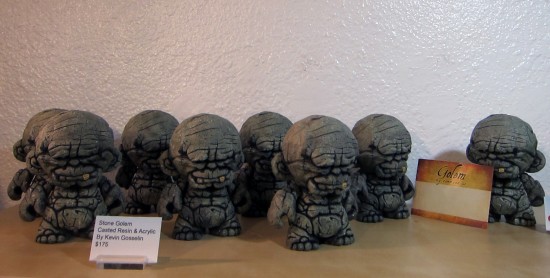 There’s definitely something rad about mastering texture, and Kevin can claim this victory. Gosselin’s Golem look like stone. His Tree Ent appear as wood. For these pieces, Kevin used the Munny platform as it was intended. He customized a blank DIY toy, but then took it to the next level by hand-casting limited edition resin multiples. For the custom Munny collectors out there, the Golem and Tree Ent are must haves. Often with customs, cameras and lighting can hide mistakes and imperfections. In this case, digital photos do an injustice. If you purchase one, I think you will be pretty stoked when you actually see it. 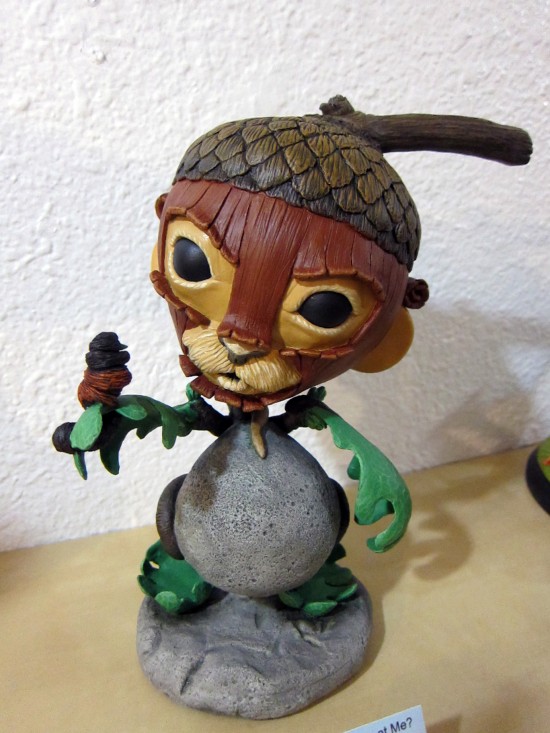 You looking at Me? by Kevin Gosselin

I called Gosselin an “open source” customizer because he is happy to share his techniques. What looks like a real stone in the woodland critter above is resin that’s been hit with a “chip brush”. I was present as Kevin gave a brief tutorial about this effect to a fan. He later explained that there’s no reason to be cagey about technique, since craft is only part of the artistic equation. To really achieve success, the sculpture must resonate with its viewers. 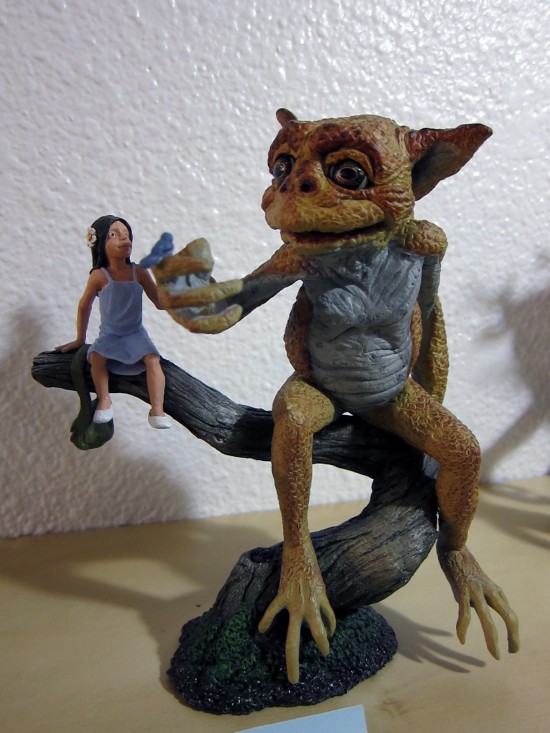 Gosselin showed a few original (non-platform) works that he’d created recently for another show. Like Stith’s pieces, they had a certain sci-fi/fantasy quality. The little vignettes and carefully sculpted faces made me feel like I was catching a special instant, a “precious moment” if you will. It was interesting to hear Gosselin talk about these works in the populist context of “kitsch”. He mentioned that he’d be happy to have his sculptures produced and sold at a place like Hallmark. These are not the custom toys of 5 years ago. 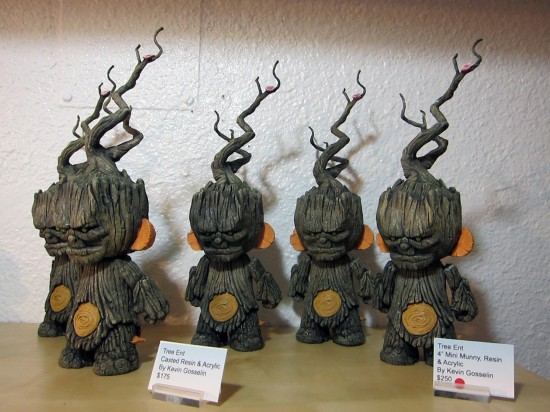 Vinyl Roots, featuring the work of J★RYU, Kevin Gosselin and Troy Stith, is on view at Dragatomi in Sacramento, CA through June 4th. The show was worth the trip up there from the Bay Area, so check it out if you can. All available work can be purchased online here. I will post a full set of photos from the show on Flickr tomorrow (and update this with a link).