Arbito’s oeuvre always works so well in San Francisco, where psychedelia never went out of style. He made his latest solo show, Far Out West just for us, his favorite part of the world: “the west coast and all the crazies who live there.” Arbito created new versions of the usual suspects in fresh colorways and patterns: The Seeker, Patty Power and Sammy. (The Hobo had to sit this one out due to a busted mold.) Beyond the resin figures, the vintage banks had everybody talking. Best appreciated in person, Arbito has painted new life into old ceramic, and in the process, really brought to light how wacky some of those vintage characters actually were. Arbito and his wife, plush artist Snaggs, said the banks were something they’d been collecting for years, and one day just decided to paint. The results are in a word: mesmerizing. Pinocchio and the Magic Cat got snapped up mere moments after the doors opened. If any of the banks, figures, original 2D art or prints are still available, they’d be for sale here. Short on cash and shelfspace? Get 32 Seekers in two dimensions for less than one Seeker sculpture. Just saying. 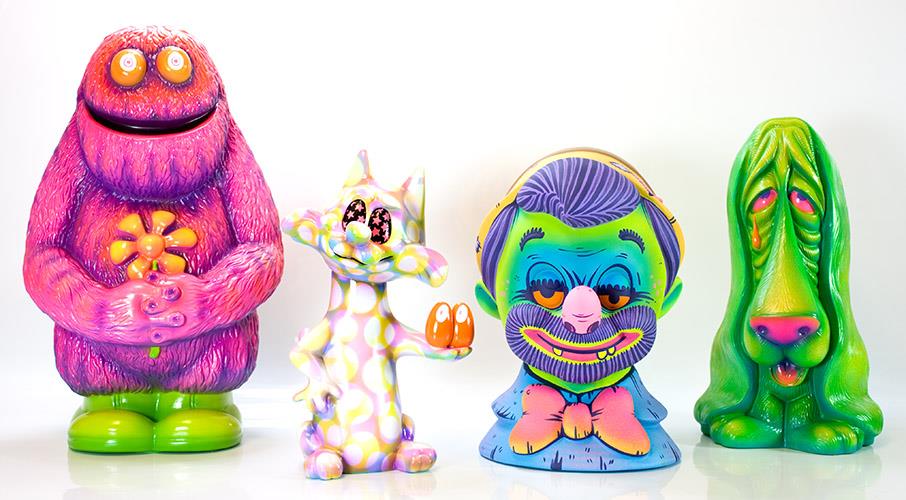 Speaking of Seekers, all the new Seekers looked incredible. There was GID, embedded bits, skulls and, of course, tons of color. Arbito said he’s working on sculpting some of his characters who haven’t yet made the jump to 3D (something for the ladies this time…), and we may even get a bit of backstory via comic-style panels. Want to see even more photos of the show? Check out the slides below. For immaculate turnarounds of all the pieces, you can’t beat Arbito’s Flickr.