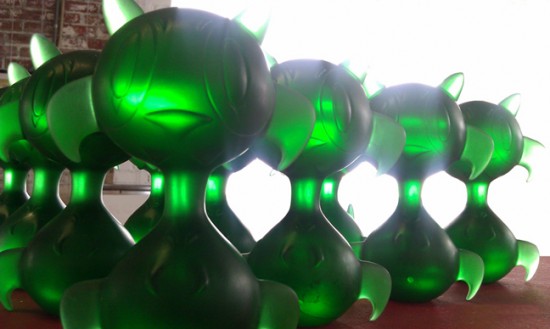 Everybody’s talking about resin today, and if my site behaves itself, I’ll have more to say on the topic tomorrow. Meanwhile, here’s Curiosity, a dapper green fellow with an hourglass shape by Nathan Hamill. The figure, an original character designed by Hamill, was sculpted, molded and cast in translucent emerald green resin by Juried Resin Show judge, Julie B of Pretty In Plastic.

As I’m coming to find out, many people like their resin toys “fast and sloppy”. If that aesthetic translates as charming to you, you’ll probably want to take a pass on Curiosity. Matt Hisey attended Hamill’s recent LA signing and reported that the craftsmanship of the pieces was impeccable. From the photo, they almost look like frosted glass. Super clean. It’s like the resin equivalent of Purell…if that’s your thing. Nathan Hamill’s Emerald Curiosity is a limited edition of 15 figures. Each piece stands 5 inches tall and is available for $65 here.