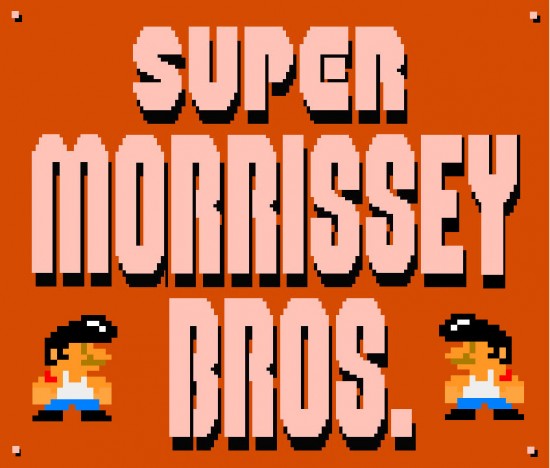 Sometimes, success is found in the juxtaposition of two polarizingly unlikely elements. Currently, a composer going under the moniker “lazyitis” has created a remix of The Smiths’ “This Charming Man” in the 8-bit style of Super Mario Bros. The effect is an almost blasphemously cheerful rendition of a classic goth anthem penned by Morrissey, a man who champions celibacy and sings songs called “Girlfriend in a Coma”.

…I can’t stop playing it! Click the green circle below to play “This Charming Mario”. If you’re curious why I don’t cover more videogame-inspired content on this site, click through, as I’ve written a brief bit about it.

People sometimes ask me why I don’t write more about art and toys inspired by videogames. The truth of the matter is that in my petri dish of youth culture influences, videogames were more on the periphery than the center. Now, with less time for writing and so much inspiring stuff to write about, I must make difficult choices about how to apply my time. Videogame culture (see also “anime”), is not typically on my priority list.

Like most kids born in the late 70s, I had an Atari 2600 and accompanying fond memories of battling my sister at Combat. Perhaps showing a precocious interest in minimalism, my favorite mode of Combat was “invisible mode”. If you’re old enough to remember this game and this mode, we basically stared at an entirely blank television screen and button-mashed your joystick, as “graphics” (a pixel dot of ammunition and a blink of your 8-bit tank) would alight only when we made contact.

During my early 20s nostalgia crisis, I acquired another Atari 2600 at a garage sale and began collecting cartridges at flea markets. The result of this was to find that innocence lost cannot be recaptured. Specifically (and I blame the Internet for this seemingly reverse logic), I had more patience navigating Pitfall! as a child than I did as an adult. The idea of not being able to save my precise place in the game and having to return to the horror of a seemingly never-ending array of do-overs was inconceivable in today’s custom-fit, on-demand world. Like hell I was going to swing over those alligators again…