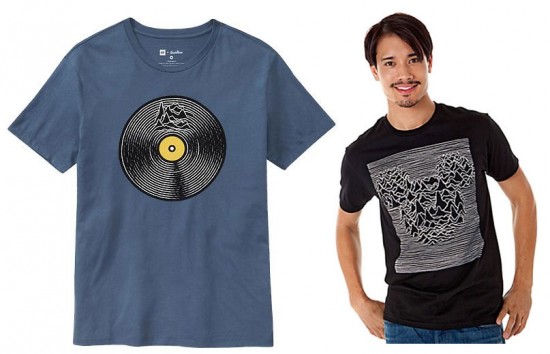 Following Disney’s bizarre and much-blogged misuse (above, right) of Peter Saville’s iconic album art for Joy Division’s Unknown Pleasures, The Gap now takes those iconic waveforms for an unsightly spin (above, left). The preppy retailer is apparently offering merch from the Threadless crowdsourced community, and among them is this “Shadowplay” T-shirt designed by Didier Gerardin from Nancy, France.

Didier Gerardin’s ideas come from observing and writing about what’s going on around him. His favorite piece of art in his home is a reproduction of Andy Warhol’s “Zebra.” Didier feels famous every time one of his designs gets printed on a tee.

I wonder what the design means to Didier Gerardin? Because here’s what it meant to Peter Saville (and Joy Division) when they came up with it in 1979.

This was the first and only time that the band gave me something that they’d like for a cover. I went to see Rob Gretton, who managed them, and he gave me a folder of material, which contained the wave image from the Cambridge Encyclopedia of Astronomy. They gave me the title too but I didn’t hear the album. The wave pattern was so appropriate. It was from CP 1919, the first pulsar, so it’s likely that the graph emanated from Jodrell Bank, which is local to Manchester and Joy Division. And it’s both technical and sensual. It’s tight, like Stephen Morris’ drumming, but it’s also fluid: lots of people think it’s a heart beat. Having the title on the front just didn’t seem necessary. I asked Rob about it and, between us, we felt it wasn’t a cool thing to do. It was the post-punk moment and we were against overblown stardom. The band didn’t want to be pop stars.

Of course, Saville didn’t create the waveforms we all now associate with Joy Division. He did, however, contextualize them into music/design history. If you’re interested in where the image originated, read this. …And once more, Ian Curtis rolls over in his grave.