Bittorrents and The Pirate Bay are both concepts I’d file under “Difficult to Explain to Parents”. Fittingly, 3D-printing has been added to the picture, effectively forming the ultimate parent-boggling triumvirate.

The Pirate Bay is the the world’s largest Bittorent tracker. It’s run by a non-profit organization registered in the Seychelles. Bittorrent is a filesharing protocol that enables big and fast file transfers. Many people search The Pirate Bay for treasures in the form of movies, music and TV shows. However, The Pirate Bay does not host any actual files; instead it provides links to a file that tell you who else has the file. This decentralization allows for information to be spread without fear of being shut down, as the files are stored on computers all over the world. Torrents are not the same as illegal downloads, though I suppose you could make a claim that torrents facilitate illegal downloads.

Last month, The Pirate Bay added a 3D-printing section to their website. They issued a statement that they think “the next step in copying will be made from digital form into physical form. It will be physical objects. Or as we decided to call them: Physibles.” 3D printing is a type of technology that “prints” real objects. 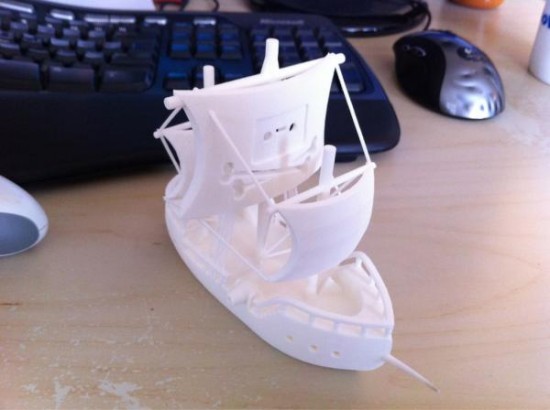 To give people something to work with, a 3D model of The Pirate Bay ship designed by Todd Blatt was one of the first items put up for download. Blatt was the perfect designer for this project, as he “likes to make stuff” and once got a cease and desist from Paramount Pictures for doing just that. Canadian game designer Charles Randall was among the first to receive his ‘physible’ Pirate Bay ship. Randall downloaded the ship off BitTorrent and then had it printed in three dimensions.

A decade ago people were truly amazed to find out that they could download entire movies using BitTorrent. At the time substantial online video simply didn’t exist, and BitTorrent was an eye opener which has since become the movie industry’s biggest worry. But according to the people behind the torrent site, copying bits is just the beginning. The next step is to download stuff you can hold in your hands.

Unlike the instant satisfaction and unbeatable price (e.g. free) of regular acquisitions on BitTorrent, 3D objects still have a few obstacles. Modeling an object of your own requires some significant skills and practice, the cost of 3D printers for home use is a few thousand dollars and outsourcing the printing to a third party isn’t cheap either. Randall used Shapeways for his Pirate Ship and paid $80 in material + shipping. 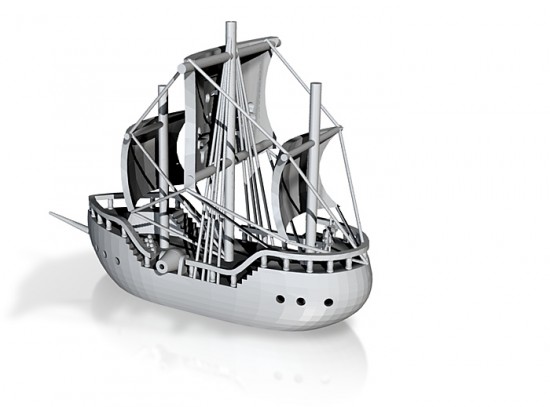 The Pirate Bay is optimistic:

The Pirate Bay’s newest category now includes files for 3D-printable Lawn Darts, a monster head, a teddy bear and a “foot prosthetic based on a real amputation“. If none of that gets your attention, how about this prediction from The Pirates? “You will download your sneakers within 20 years.” If that should come to fruition, I wonder if Nike will still say “just do it”… 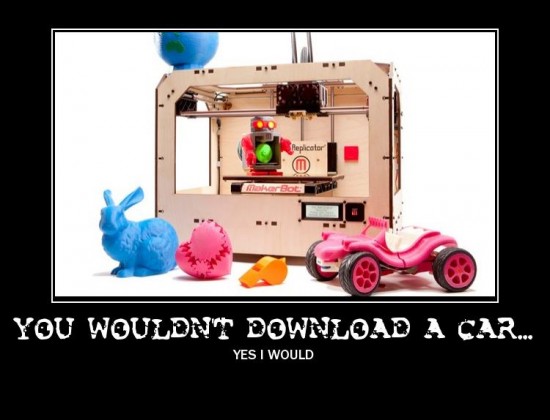