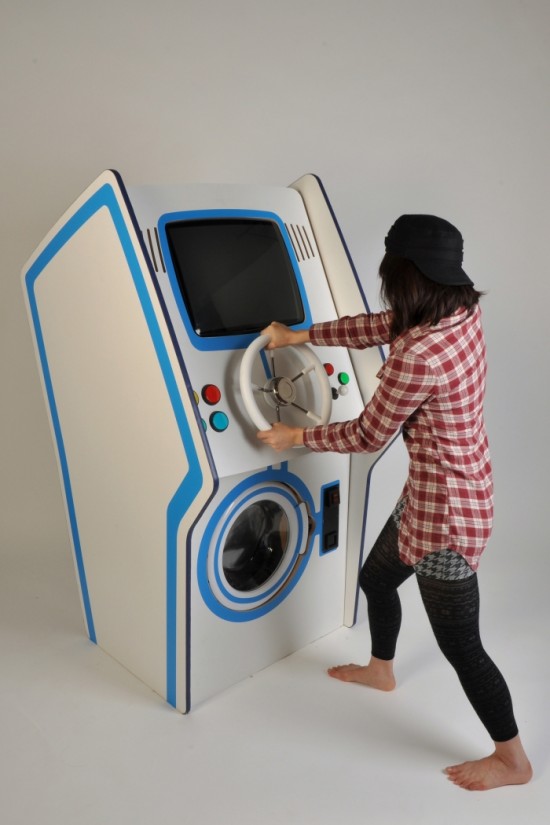 Last week, I shared some advice on how to get your kids to eat their vegetables. Now here’s a way to motivate them (not to mention yourself) to do the laundry. From Creative Boom in the UK:

Lee Wei Chen is an MA student at Kingston University in south west London who has designed a video game that involves doing the laundry. His “amusement washing machine” resembles an arcade style video console – but the bottom half of the unit is a washing machine. Lee Wei has linked the circuitry of the two devices, so that the washing cycle becomes dependent on the gamer’s progress. If he or she struggles while playing the game, extra coins will be needed to complete the cycle.

Lee Wei, who is originally from Taiwan, said he wanted to find a productive use for the “wasted but enjoyable time” he spent gaming. “I realised that the skills I had developed in the virtual world were useless in the real world. I wanted to make them useful,” the 27 year old explained. Players put three pound coins into the machine and are given three lives – this also turns the washing machine on. If players fail to progress beyond a certain level without losing their lives, the washing machine responds by refusing to move onto the next stage of its cycle and the player has to add more money.

The Amusement Washing Machine game was exhibited over the weekend during the London Design Festival. It’s just a one-off conceptual washing machine for now, but I’m sure it won’t be long until Maytag takes note! See also: the wedding machine.