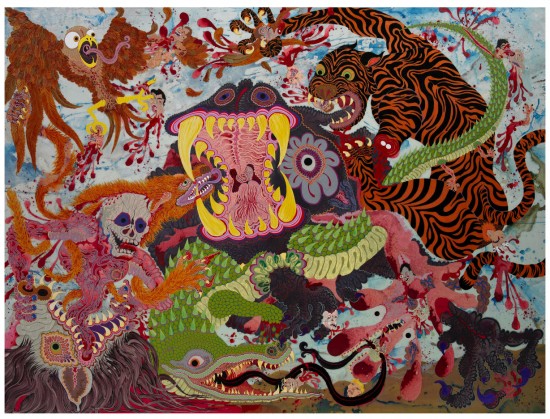 You know how sometimes when you look at a piece of art, you don’t necessarily know what it means or from whence it comes but you can still appreciate it? Other times, you stare into the paint on the canvas and practically feel yourself connecting with the artist’s inspiration. I just had the latter experience with Aaron Johnson‘s Now We Hunt Hippopotamus. I totally see what’s beyond the surface. Skip to the next sentence when you’re ready for the spoiler. Says Johnson:

Now We Hunt Hippopotamus is a convergence of disparate influences, specifically including The Hippopotamus Hunt by Rubens (one of my favorite paintings by one of my favorite painters), Indian firecracker graphics (which I discovered traveling in India in 2005, a trip that completely exploded my color palette), and the David Lynch film Wild at Heart (the title of this piece comes from torrid moment when Isabella Rossellini stares down the barrel of her pistol pointed at the camera shouting ‘Now We Hunt Buffalo!’).

A painting titled after an obscure Isabella Rossellini quote in a David Lynch film? Yes please. 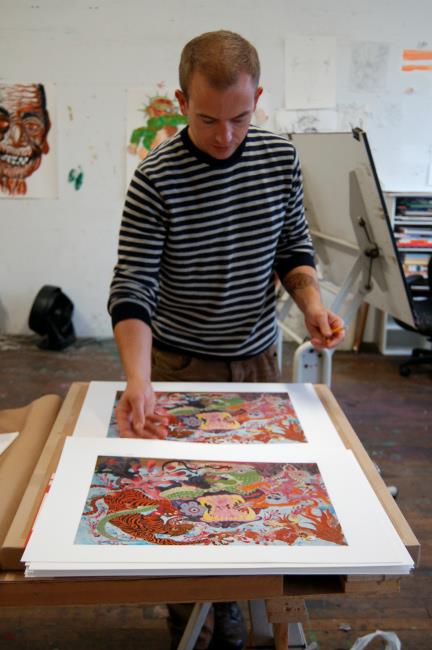 Originally realized as “a reverse-painted, acrylic-polymer-peel painting” this image from Johnson’s Americana-grotesque canon is now available as a limited edition print. The artist “liked the idea of telling a humanity versus nature story in which the human element is represented by miniature severed heads, clearly overwhelmed by the behemoth brute force of the animals raging around the composition.” Nowhere Limited is selling an edition of 30 signed and numbered 17″x21″ Now We Hunt Hippopotamus prints for $80 each here. Nice.