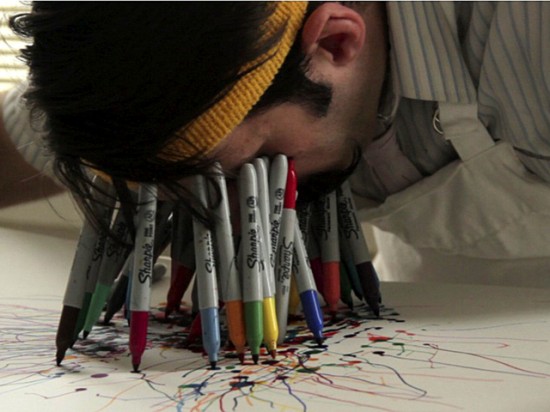 After seeing these photos of Jared Clark‘s Bleeder project, it occurred to me that I do something similar. Let’s call it “Jeremy Brautman’s Sleeper project.” There are a few key differences. Where Clark’s art is active, mine is passive. Clark creates his abstractions with purpose and intention in his art studio. My art, on the other hand, occurs immediately prior to needing another cup of coffee at work. While Clark “engages with format,” I have a unique spontaneity that can only be described as “that moment when your head drops toward the keyboard and just as abruptly jerks back up.” 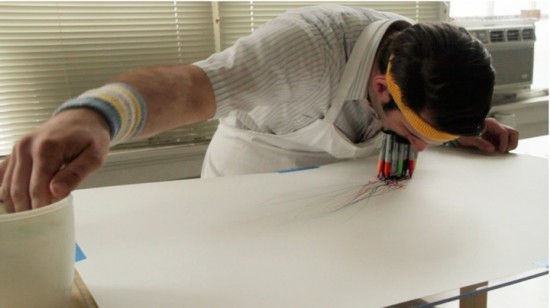 The Internet is buzzing with Bleeder (all stories trace back to Ignant). So much so that at the time I’m writing this, Clark’s website is unavailable due to having exceeded its bandwidth limit. All jokes aside, there is talent in his technique. Imagine manipulating that many Sharpies without some falling down or propelling their way into your eye socket? The problem is: I can’t get past Clark’s sweatband. 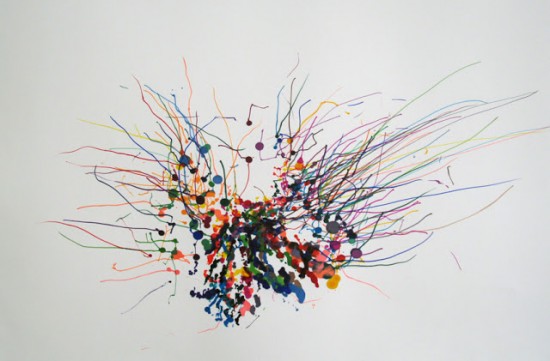 See, it’s not just that he’s wearing a sweatband around his head. It’s also that set of wristbands, the soul patch, the affected mustache and that ironic apron. Because his website’s down, I can’t read up to find out whether the hipster/jogger/baker look is some sort of performative part of the face painting art. So, instead here’s a cached quote about Clark from Andrew Kozlowski:

“Clark is adept at taking the theoretical concepts of modernism and minimalism and reapplying them to conditions that are not ideal. Often with minimal intervention, Jared succeeds in addressing major considerations of abstract painting, especially mark making and color. However I find his engagement with format and the consideration of the artist’s hand his greatest concerns. How these objects find themselves arranged is strictly through Jared’s manipulation. Yet it is the prompt of their form, either through color, scale, or character, that informs Jared as to what he is to make of them, creating an odd relationship between artist and object, disguising who exactly manipulates who.”

Writing about art is difficult. It’s much easier to write about sweatbands. 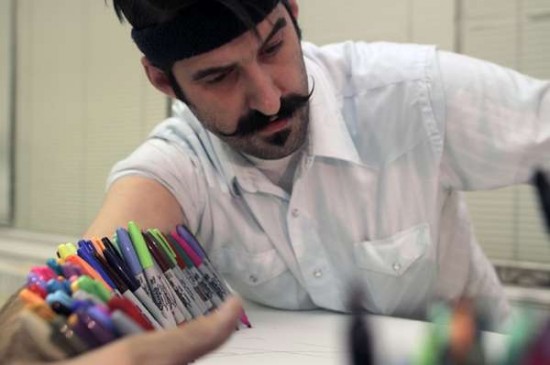 Jared Clark looks like a good sport. Now if you’ll excuse me, I’m going to put some pens up my nose and call myself “Posca Nostrils”. 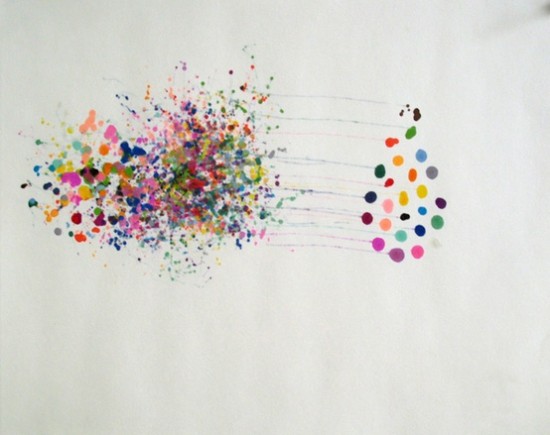