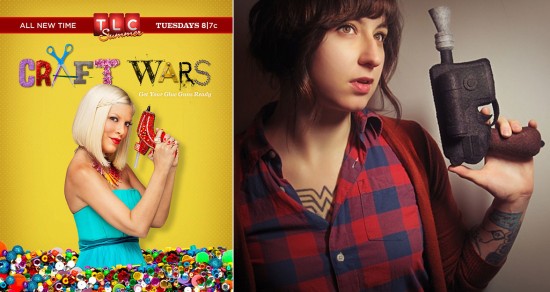 You know that old saying: “Behind every great toy lord and toy hunter on reality TV, there’s a stack of broken action figures and a girl with a hot glue gun”? Well, tomorrow night, the proverb plays out on cable TV, and we’ll find out what happens when people stop being polite and start getting real: real crafty.

Toy designer Steff Bomb (née Stephanie Baum) is the next member of our niche community to take a crack at her fifteen minutes of fame by appearing on reality TV. The network? TLC. The show? Craft Wars. The time? Tuesday August 21st, at 11PST EST/8PM PST. The prize? $10K. That kind of money could buy a ton of beads and glitter. She’s got a 1:3 chance of winning the money, so I wanted to squeeze in a quick chat and be able to say I knew her when.

JB: Please tell us about yourself.

SB: My name is Steff Bomb. I’m a girl. Sometimes people think I’m a guy, but I’m not. (I promise.) I’ve been sewing for about 8 years now, and I’m 29 years old. I sew plush toys; mostly food-themed plush, and probably because I’m always hungry. I live in Chicago. I have a cat named Nanerpus. I watch way too much TV. (Oh Tim Riggins, you act tough but I know deep down you just want to be good.). I have a Tiger Beat-sized crush on pizza. 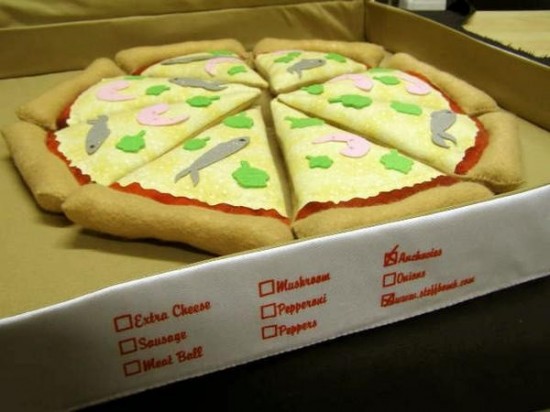 I’m going to sound like such a crazy person trying to explain this. First, I get an idea, but it’s not just “I should make this.” Instead, it’s more like “I should make this, and this is how I’m going to do it, and I’m really excited, and this is what the finished product will look like.” All at once. I’m very trial and error. I don’t sketch anything out beforehand. I always have a very loose step by step process of what I am going to do in my head, and I adjust it accordingly as I go along. Also, I drink a lot of coffee every day. I think that might be the most important part. 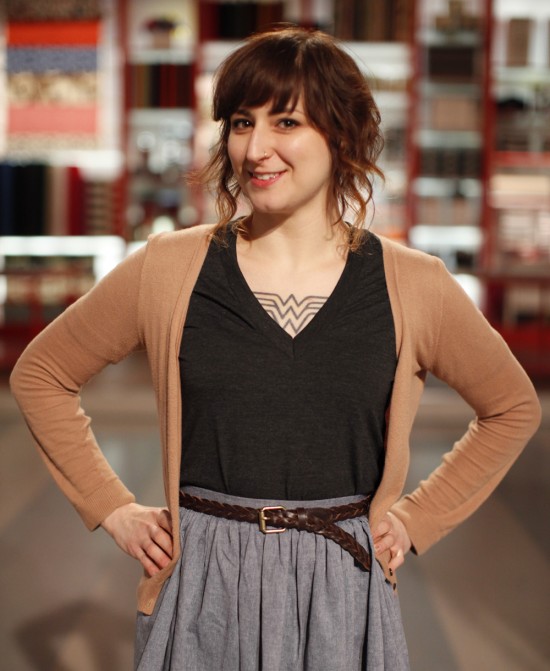 How did you become a contestant on TLC’s Craft Wars?

It all started when a very nice stranger randomly emailed me about the show, saying I should try out. I actually thought it was a prank, but after doing some extensive investigating (a 3-second Google search), I realized it might be a real thing and decided to give it a try. I had to fill out application forms, and I filmed my audition on my computer and sent in the first take. I’m very uncomfortable talking about myself in a positive light, so it’s three very awkward minutes filled with nervous fast talking. SOMEHOW that seemed to work because eventually a producer called me and told me that I was going to be on the show…which I also thought was a prank. 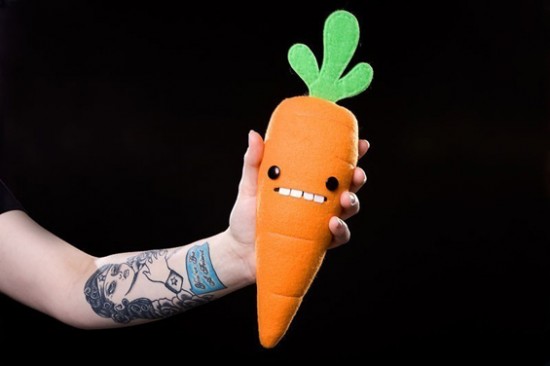 Without giving anything away, could you explain the premise of the show?

Each episode, three people compete against each other for the chance to win $10,000. There are two challenges and a general overall theme with wacky materials. (My episode is Thanksgiving-themed). You have an hour for the first challenge, and five hours for the second. A person gets eliminated after each challenge until you’re left with one winner. It’s very Beyond The Thunderdome, but with more hot glue and less Tina Turner. 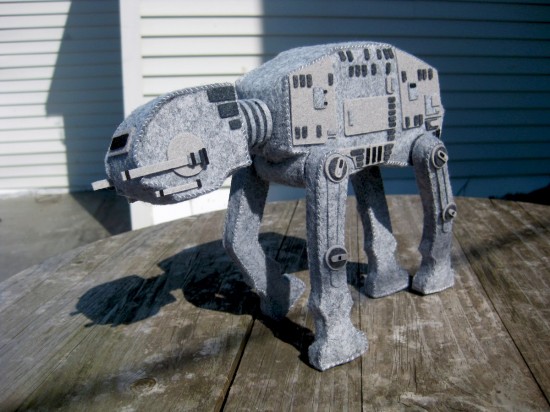 Could you explain the perceived difference between “art” and “craft” as evidenced by the contestants on Bravo’s Work of Art vs. TLC’s Craft Wars?

I don’t have cable, so I’ve never seen Work of Art, BUT I can try and answer anyway. My answer is: Art and craft can totally be the same thing, and they can totally be different. It’s all in the eye of the beholder. BAM! Nailed it. 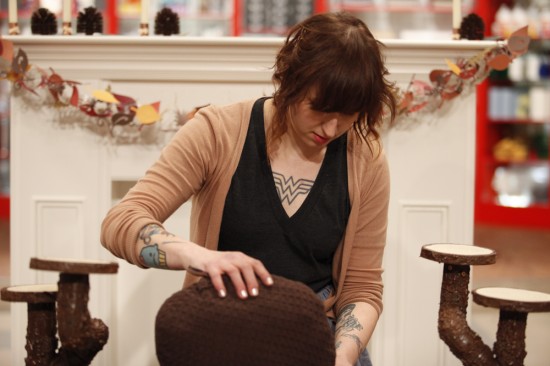 Having grown up with Tori Spelling as Donna Martin on Beverly Hills 90210, was it totally surreal to be interacting with her as the host of a TV show?

Tori wasn’t there! She had an emergency, which may have been for the best. I’d told my roommate that I was going to break into a “Donna Martin graduates!” chant for her. 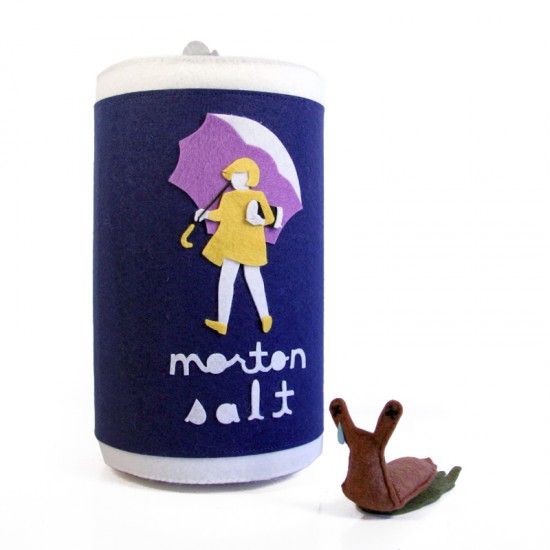 Good question! I don’t know but let’s find out right now… OMG! THOSE THINGS ALL TOTALLY LOOK LIKE PENISES, AND NOW I CAN NEVER UNSEE IT! 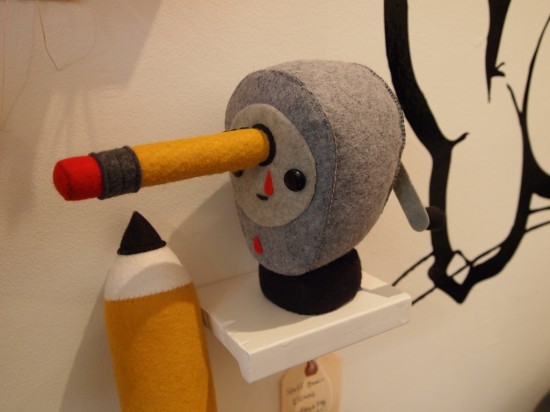 SHE’S ALWAYS DOWN! I want to be a rapper so badly. I freestyle all the time to my friends. Oddly enough, they don’t support this dream.

What’s something people would be really surprised to find out about you?

My deepest darkest secret is that I’m totally allergic to cats. I know, it’s true! I’m so ashamed. But I love my cat way too much, and I would rather take allergy medicine everyday than get rid of my best buddy. 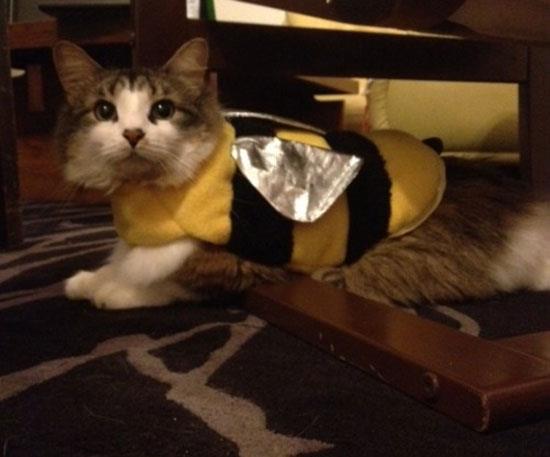 If you win the $10K on Craft Wars, what will you do with the money?

$10,000 worth of ice cream and pizza minus the cost of a gym membership? Although if I eat that much pizza, I might have to put aside some more money for a heart transplant. 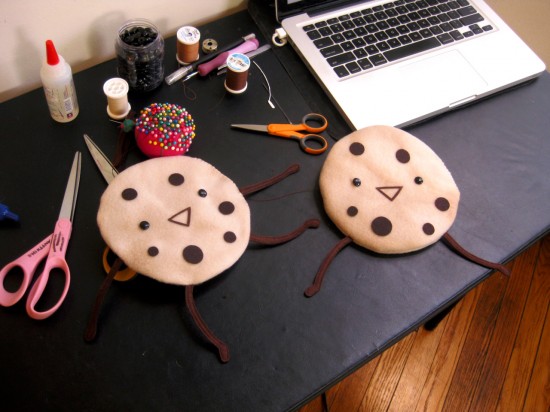 Best of luck with that! Be sure to tune in tomorrow night and root for  one of our own!