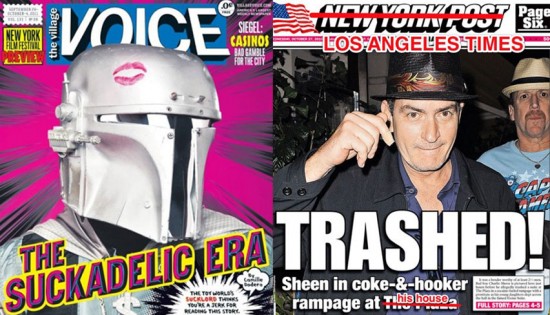 I’m late to the table with this installation of SUCKtalk with The Sucklord so rather than keeping everyone on the edges of their seats any longer, I’ll skip the discourse and get straight to the banter. (By the way, episode 0 is here, episode 1 is here, and episode 2 is here. Collect them all!)

Quick recap: Episode 3 featured Pop Art, nudity, and The Sucklord running his mouth a bit about boobs and balls. RING RING RING! Hellos are exchanged, and then:

JB: I think the question on everyone’s mind is: how are your balls?

THE SUCKLORD:  They’re fine. They took a little punishment, but they’re pretty solid. All interested parties are concerned with keeping them intact. 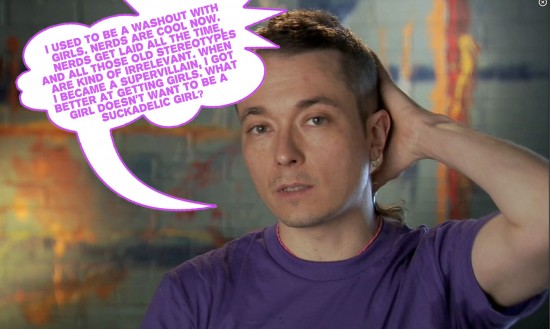 JB: That’s fantastic to hear. Did you prep your girlfriend for the episode?

THE SUCKLORD: I had to; I didn’t want that shit coming out of left field. I knew I said some shit that was gonna push some buttons. You know me though: at the end of the day, I like to talk shit and show off. It was just for fun, but I understood that there were people in my life who were gonna be hurt by that. So I did the best to prepare everybody for that spectacle.

JB: If another gentlemen were to make a similar mistake, do you have any advice?

THE SUCKLORD: Athletic cup? Say whatever the fuck you gotta say, be nice, kiss a lot of ass, take your lumps, and don’t do it again, don’t be a fuckin’ moron. 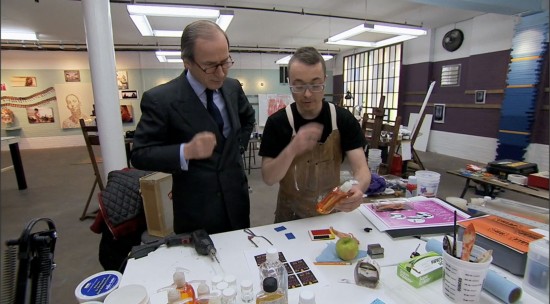 JB: I thought the last episode was great. My favorite so far. Can you define pop art in your own words?

THE SUCKLORD: Me? Define pop art? No. Fucking shit that’s popular I guess? I look at Comic-Con as pop art. People say pop art, and their go-to definition is “Andy Warhol”. That’s about as far as it goes. I don’t really know what the fuck art is, but I know what popular culture is. To me, pop art is when you fuckin’ paint Star Wars pink.

JB: How do you feel about the role of the personal in pop art? Is pop art personal?

THE SUCKLORD: These are important questions which I don’t have an answer to other than I really don’t give a fuck. That’s generally my answer to a lot of things. If I was going to wax philosophical, I’d say, if you’re popular, then you should put something personal in your pop art. If you’re not popular, then fuck off. 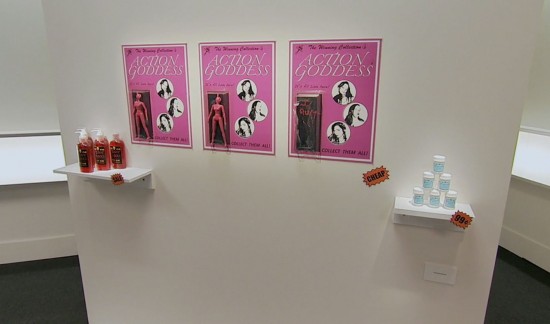 JB: Well, this is a good segue into Charlie Sheen. Charlie Sheen has kind of a Sucklord story of his own, in the sense that he’s combining winning and losing. I’m interested in why you chose him and if you could talk a little about your piece.

THE SUCKLORD: I wasn’t necessarily trying to make a piece about Charlie Sheen per se. I was really making a piece more about the commodification of celebrity meltdowns, and I just happened to pick his because it was the most recent and the most flamboyant. The Tiger Blood is not in this eloquent bottle; it’s in a shitty little Purell container. I was trying to emphasize the cheapness and crass disposability of the celebrity meltdown. 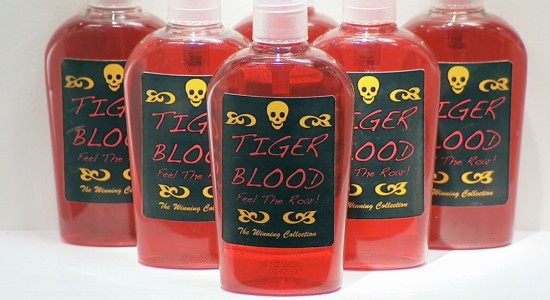 THE SUCKLORD: Yeah I liked what you said about combining winning and losing because that is sort of what Suckadelic is all about. It’s about being the fucking best and worst at the same time. 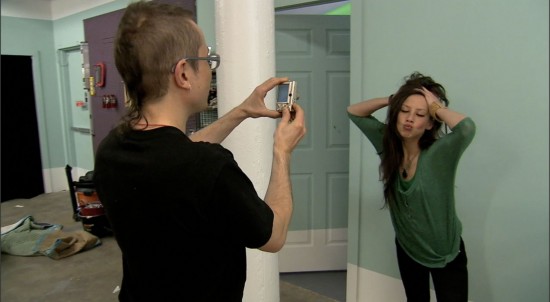 THE SUCKLORD: I can only really go back to my own personal experience. When I make my toys, the things I tend to make more of are the things that people buy. My Suckpegs are cancelled now because they didn’t quite resonate the way the bootleg figures do. As much as I would personally like to keep making them, if people don’t respond to them, it means they’re not buying them. And if people aren’t buying them, I’m not paying my bills… so, gone. 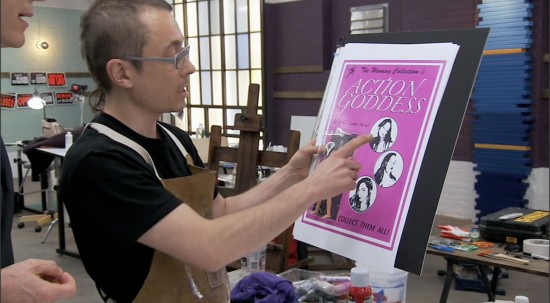 THE SUCKLORD: Yeah those sell all the time. I’ve been selling shitloads.

JB: What do you make of that?

THE SUCKLORD: It’s my most successful piece. You don’t need to know anything about Star Wars; you don’t need to know anything about me. You just look at it and you sort of get what it’s supposed to be and you laugh at it. There’s things you can bring to it, not necessarily by my own design. I just wanted to make an alternately colored Storm Trooper, and my favorite color is pink, so boom. And I just made it gay because I like gay. There you have it. It just happened to work. It wasn’t any sort of master plan. I consider it a piece of pop art, if I was going to put any sort of category on what I do. Pop is what sells right? Shit sells so I’m gonna make it. 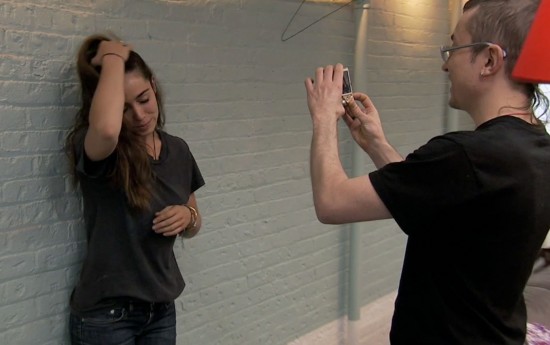 THE SUCKLORD: Probably early next year. I have the molds made and the concept done. It’s just a matter of getting the casting done. I’m getting ready to do another drop right now that I would consider to be a pop art piece. 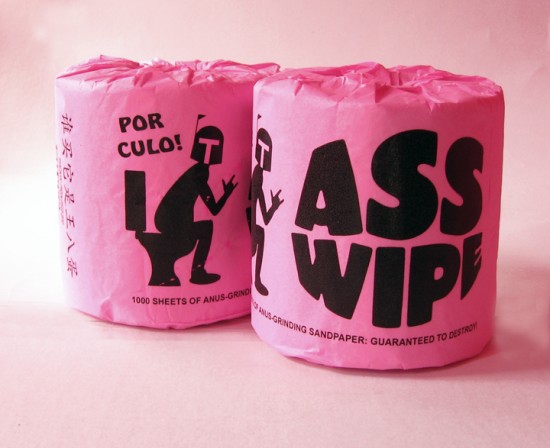 THE SUCKLORD: It’s called Ass Wipe. It’s SUCKADELIC toilet paper. It’s a roll of toilet paper with my own graphics on the outside.

JB: It’s made out of paper, not resin, right? It’s usable product?

THE SUCKLORD: It’s an actual roll of toilet paper that I bought in Chinatown. I got the pink tissue and had it silkscreened with Suckadelia, and I just wrapped the toilet paper in the tissue. It says Ass Wipe, and there’s a picture of The Sucklord taking a shit next to it. I’m trying to figure out what to charge for it. 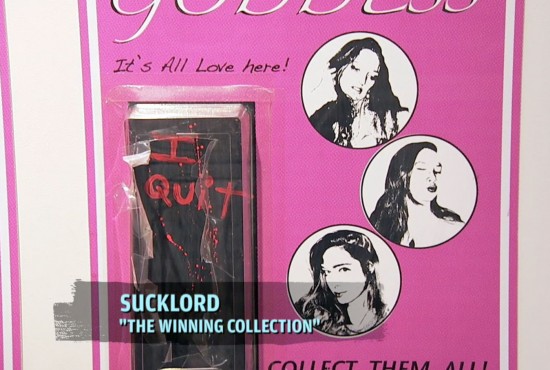 JB: Uh, I’m not sure I can help you there. Will you be selling it at DesignerCon?

THE SUCKLORD: I’m gonna throw it up on my website after this chat, and then I’m gonna have an exclusive colorway at DesignerCon. I have a couple of different colors. The DesignerCon one is gonna be pink and silver. It’s an experiment. I’m just trying to see how far I can push this thing. I’m obviously a horrible artist. I have no technical skill and no ability. I can’t draw, and I can’t paint. I have nothing really meaningful to say. I pretty much suck, so I may as well just go with that and see how lame I can be and how much people will pay for it. 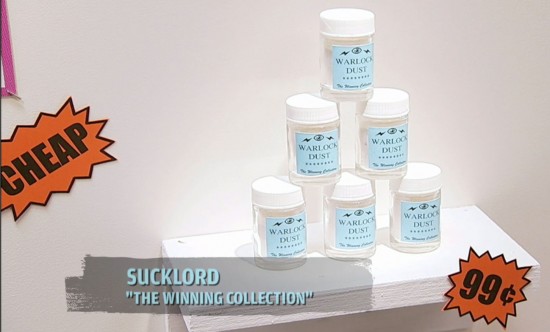 JB: Hey, what’s all that gear you’re carrying in the Cars.com segment online by the way?

THE SUCKLORD: There’s this sort of flash sideways episode where the entire cast has been charged to make this trophy for car of the year by Cars.com. It’s just this sort of separate reality that doesn’t exist anywhere else in the series. That was my resin casting pressure chamber that I walked in there with.

JB: I love that you just made a reference to LOST in this chat about pop culture and pop art. I’ve heard people asking about buying the things you make on Work of Art. A buddy of mine asked me about the first Wizard piece you made that you got kind of slammed for…

THE SUCKLORD: I don’t own those pieces. I don’t know where they are or what’s going to become of them. I’m sure that will be made clear. At some point would I like to make derivative work of things that people have taken an interest in? Sure. I just don’t know what the protocol is. I’ll get to that eventually if people are still interested in. 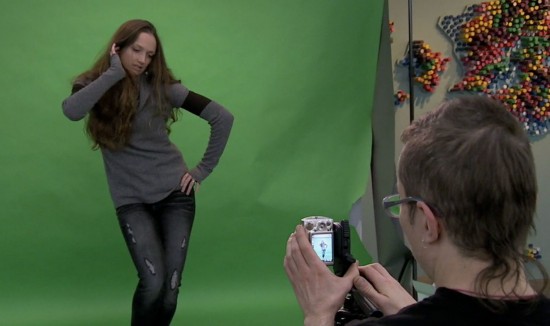 JB: You accidentally spilled paint onto Jazz-Minh’s piece and she ended up going home! Was that some sorta subsconscious super-villainry or pure accident?

THE SUCKLORD: If it was subconscious, I wouldn’t be aware of it. I know I wasn’t deliberately trying to sabotage anybody. Shit just happened. Thank God she didn’t get mad about it. Unfortunately, I’m not a completely evil person. If she needed help repairing the piece, I would have wound up doing it and it would have cost me precious time. I can’t say if the paint was really part of why she went home. From what I could see, it wasn’t like a piece that the judges loved until the paint came on it. 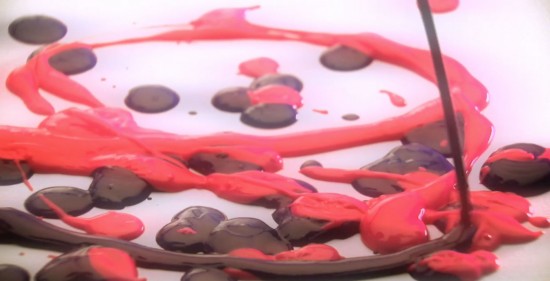 JB: In your defense, she herself said that it was the most beautiful paint splatter she’d ever seen.

THE SUCKLORD: That was kind of her. I am a big fan of splatter. Unfortunately, Jerry Saltz slammed me for my paint splattering in the first piece. What the fuck am I supposed to do without my paint splatter? So thankfully, it got across somewhere.

The Sucklord tweeted the following “Best Girlfriend Ever” picture today, so all is as it should be in the Suckadelic Universe. Awwww….Watch episode 4 of Work of Art tonight at 9PM on Bravo. 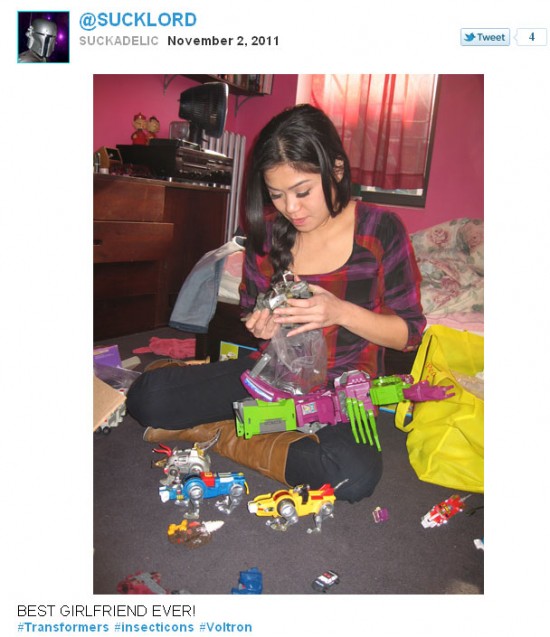