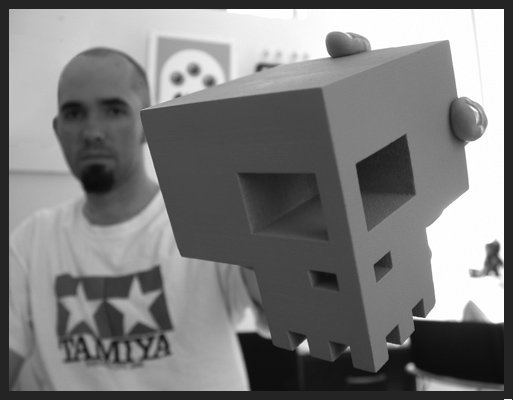 To name-check a so-wrong-it’s-right song title from 80s Norwegian synth-pop band, A-HA, Clay “Ferg” Ferguson is “Living a Boy’s Adventure Tale”. He owns a home in Austin’s Hyde Park–neighborhood where he grew up. Ferg’s childhood fondness for 12-inch G.I. Joes has evolved into an adult passion for the early designer toys of Three Zero. Toys as both inspiration and catalyst: Ferg recently left his full-time job to run not one, but two, successful toy companies. I talked to Ferg about all of this back in February for my Toys by Design column in Design Bureau. Print is excellent to hold in your hands, but blogs hold more words. Here’s the rest of our chat. 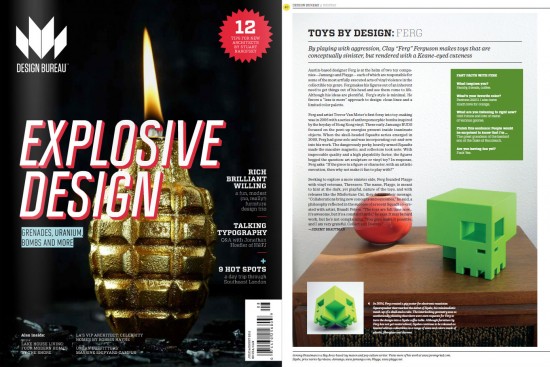 JB: I’d like to get some history on Clay Ferguson, the man. Where are you from? What is your background, and what were you up to before forming Jamungo and Playge?

CF: I’m from Austin, TX. Hyde Park to be exact…an awesome place to grow up. This town definitely has a lot of creative energy. When I was a teenager, I would see Kozik fliers for random punk or noise bands on the telephone poles. I didn’t know this at the time, but he lived in Hyde Park as well. Seeing that shit early on, and the scene in general, definitely got me hyped. Austin in the 80s was pretty nuts…

Before forming the toy companies, I was working for various design agencies… eventually I got bummed on that, so I moved into freelance design and consulting. It was around that time that I really got into screen printing and also character design.

How about the history of Ferg the toy entrepreneur?

Jamungo was formed in 2003 and Playge in early 2009. I met Trevor [Van Meter] while working on a project…we hit it off right away and were both stoked on the art toys we were seeing..BXH..Lau..Eric So…the early stuff. We talked about doing some toys of our own. At the time, everyone was doing human and animal based stuff…. we wanted to do something a little different. So for our first release, Trev and I decided the figures would be based on an inanimate object. It would be something that still had energy (bombs and grenades) and we’d apply that to a humanoid form. That’s where the BUDs and NADEs came from. It was also at this time that Kozik (we had become friends through the poster scene) was breaking into the toy world…he would tell me how things worked, who to talk to, etc. He helped us a lot.

Playge came about through having some design concepts that didn’t really fit into what we were doing with Jamungo… having darker themes and characters but still keeping it fun. I showed the stuff to Kim [of Three Zero] and he liked it, so we joined forces and formed Playge. We had worked together in the past so we knew what to expect from each other. It was an easy fit.

Care to offer up the etymology of Jamungo and Playge?

Jamungo is a made up word…If it means anything it’s slang for ‘BIG’. Quite the opposite of Jamungo the company. Playge (pronounced plāg) is an attempt to describe the dark yet playful nature of the toys. I fucked that up though, because half the people I talk to pronounce it PLAY-GEE. 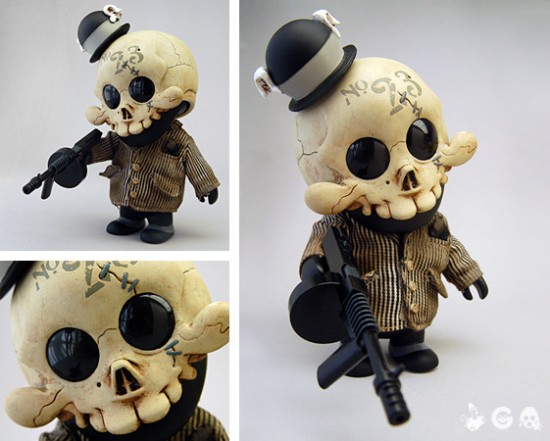 The clothing on your figures is pretty amazing. How did you decide to to merge cut-and-sew with toy art?

Thanks. The Squadt toys have a lot to do with influences, childhood and otherwise. One of my first memorable and definitely favorite toys were the 12-inch G.I. Joe pieces from the 70s. (Yes, I am old.) I really geeked on all of the clothing and accessories. I also loved the early Three Zero pieces (Agent D, Agent Rat) that featured cut and sew. So for the Squadts I took cues from those and other pieces, and then I applied my aesthetic to hopefully get something new and a little different. 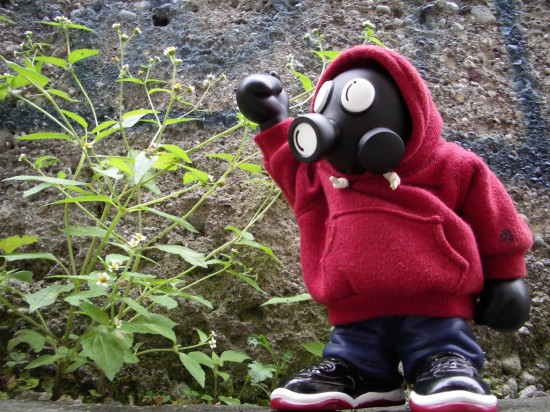 Your figures often come with great accessories. How important is it for your work to have “playability”?

I have been talking about this with friends and fellow ‘art toy’ designers a lot lately. I think a lot of it really depends on the motivation behind the piece. If it’s purely an aesthetic idea or some kind of compelling visual statement, and the result is interesting enough to just sit on a shelf and be looked at, then I suppose its not important at all. But if the piece is basically a toy…a figure or character, with an artistic execution, then why not make it fun to play with? I’m definitely going down this path right now and getting way into the many playability options that a piece can contain. I could probably go on about this for a while… 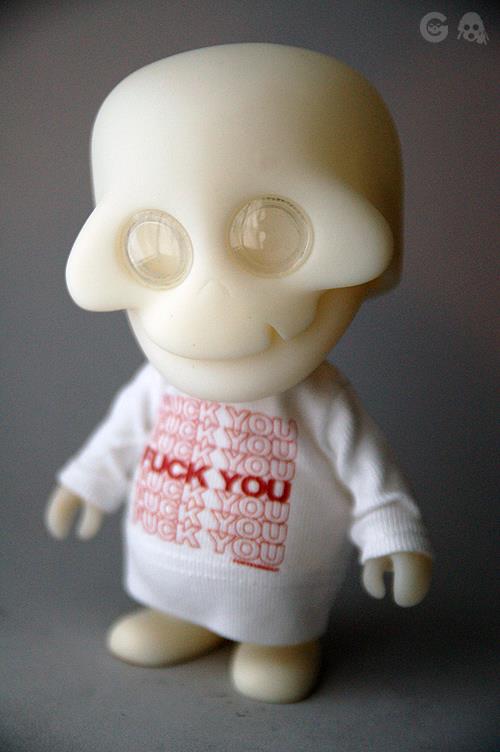 How is your design background useful in making toys?

I have some background in industrial design, so that helps for sure… especially on the technical side… things like accurate turnarounds or detailed control drawings are important if you want your concept to be realized as imagined. Then there’s the graphic side that helps with all kinds of things necessary in toy design… logos, packaging, marketing materials etc. Some photography chops come in handy as well. 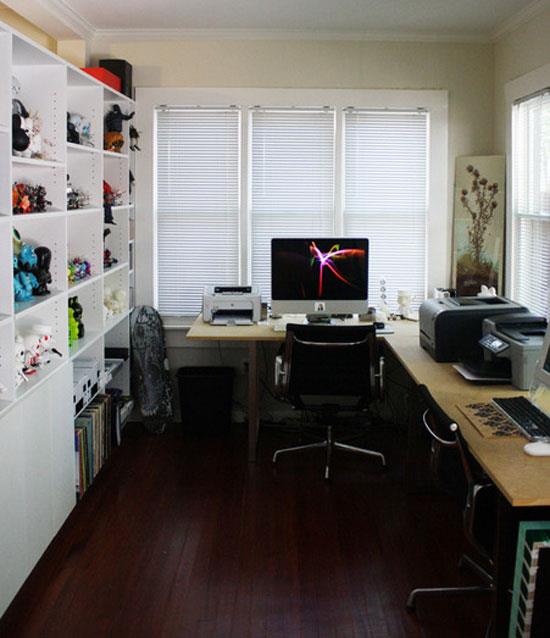 Sqube is different from your other work in that it’s not character-based and is more of a design object. Tell us about the origin and process of Sqube.

The Sqube started as a sketch in 2D. I messed around with it on paper for a while with the idea of producing it as a sculpture. Eventually it made it onto a gig poster for Squarepusher. People really seemed to respond to the concept so from there it was modeled into 3D and then produced in physical form. Now there are 1″ stainless, 4″ ABS and 16″ fiberglass versions. I’ll probably continue to make them in various materials and sizes. A 12″ concrete version might be cool.

That would be rad “public art”. How was Sqube received by the toy-collecting community?

I believe people like them. They seem to appeal to a wide array of collectors and this makes me happy…I really can’t recall seeing any negative comments about them other than “what’s it do”? 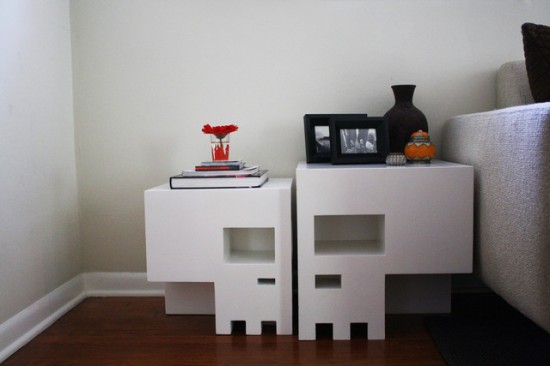 If you were to put a sample from each series of figures you’ve done in a blender, what would be the consistent (conceptual) “ingredients”?

Probably the practice of stripping away the unnecessary. Clean lines. Limited color palettes. For what I do, less is usually more but there are no hard and fast rules.

Both Jamungo & Playge have made cat-related toys. I’ve got a bet going that you have a cat. Do I win?

Yes. I have two cats. They are both worthless.

What is your passion/driving force to create?

I guess its just kind of an inherent need or want to get things that are in my head out, and to see them come to life. I get great satisfaction out of that. Sometimes it’s a selfish, therapeutic thing, and other times I make things to see how others will react.

What inspires you?
Family, friends, coffee. 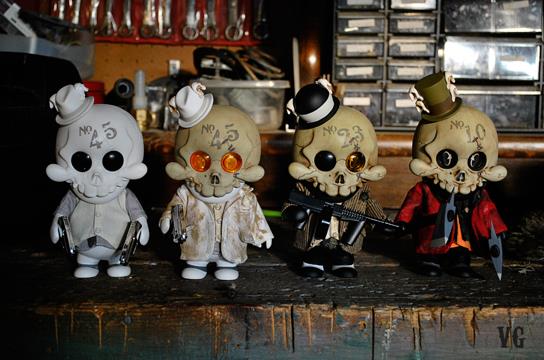 How important are collaborations in what you do? [Note: Ferg & Brandt Peters are on the short list in the Best Collaboration category of the Designer Toy Awards: congrats!]

Very. Every collab brings new challenges, and most of the time, it’s really fun to work through them. Collaborations keep things fresh and bring new concepts and outcomes that wouldn’t otherwise happen. I’ve learned a lot by working with other artists.

Who are your favorite artists (across any discipline)? 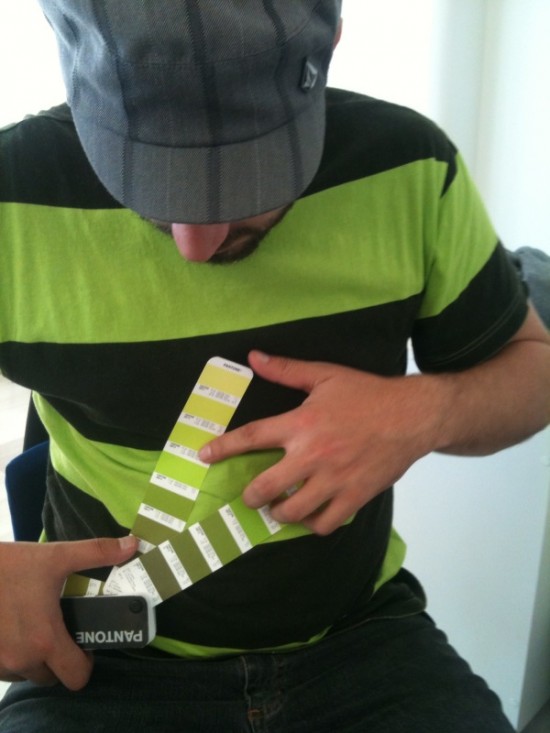 Someone who is not Ferg but shares a love of 382U

What’s your favorite color? (My money’s on green.)
Correct: 382U. I also have much love for orange.

[At this point I blew Ferg’s mind by showing him the Ferguson “Firefly” 382U radio, which combines his favorite Pantone color with his last name. Whoa.]

What sort of things and toys and art do you collect?

I collect guns, knives and any toys that get my attention, mostly older stuff. I just scored some Herculoids toys that are real cool. As far as art, I collect art prints of all kinds and the occasional painting. 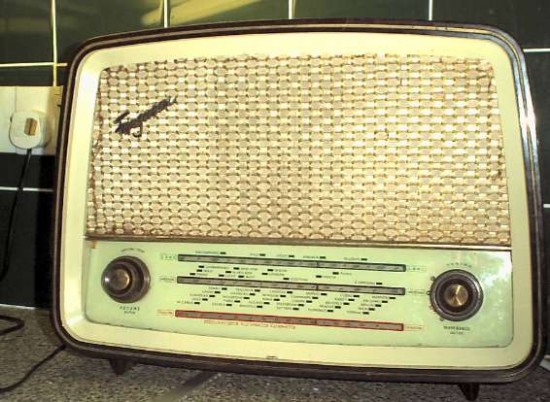 What’s currently on your stereo/iPod?

Odd Future and lots of metal of various genres.

You’re based in Texas. My only knowledge of Austin is through Richard Linklater’s Slacker. How does the area influence you?

Not too much now, but growing up it was huge living here and seeing so many people doing cool shit and making stuff happen…so in terms of direct influence on the style of my current work..I would say not much at all, but as far as just realizing you can do whatever you want and get it out there for people to see…it’s been very influential in that regard. 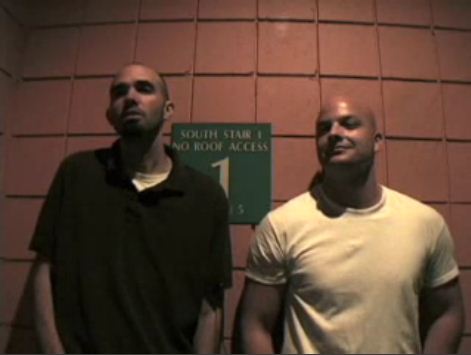 In the film, The Vinyl Frontier, you mentioned having a day job. It’s been a few years…are you still moonlighting?

The toys are full time now…it’s awesome, but it’s a constant hustle. I love it though…so this is where I thank the collectors for all of the support. You guys make it possible and I am very grateful. Collect and Destroy. 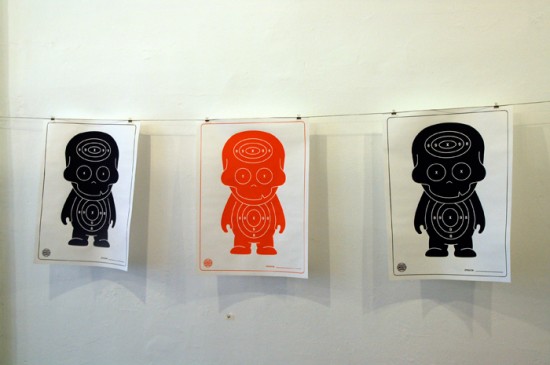 Finish this sentence: People would be surprised to know that I’m _________.
The great grandson of the bastard son of the Duke of Buccleuch.

Are you having fun yet?
Fuck Yes. 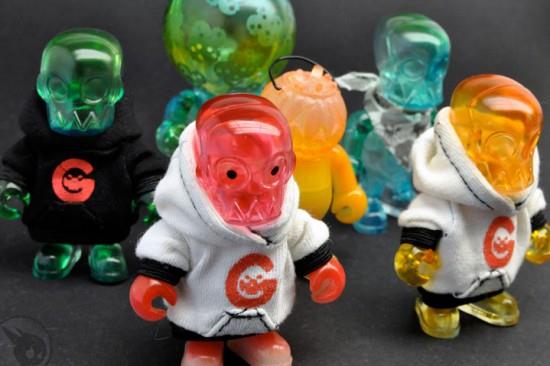 Ferg will be walking around SDCC this week with some of what you see above in his pockets. Say hi if you see him!