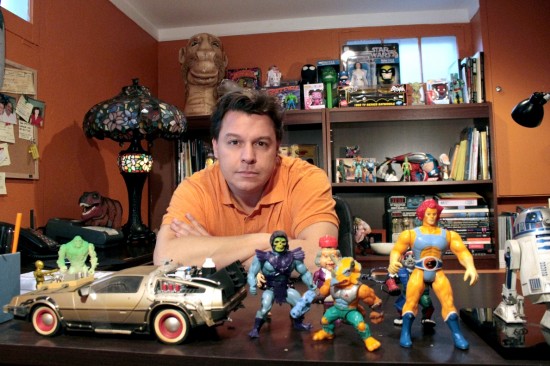 Move over Sucklord, TV has a new toy lord, and he’s not from Chinatown; he’s from New Jersey! Starting next Wednesday, The Travel Channel will begin airing their new reality TV series, TOY HUNTER. The program follows toy expert Jordan Hembrough as he travels the USA in search of yesteryear’s plastic treasures.

Hembrough is the founder of Hollywood Heroes, a New Jersey based vintage and modern collectables company.  He got bit by the collecting bug as a kid and covered his childhood bedroom with “Star Wars and superheroes and all the cool movie toys”. After graduating from college, he found work as the head buyer for a chain of retail comics and sci-fi collectible stores. When that company closed, he formed his own. Since then, he’s been “non-stop, knee-deep in toys ever since and absolutely loving every minute of it”.

Toy Hunter premiers next Wednesday, August 15th at 10PM on the Travel Channel with a one-hour season opener. I was invited to participate in a media conference with Hembrough, and I’m sharing some of the questions and answers I thought might be of interest to my readers. (See if you can figure out which question I asked!) 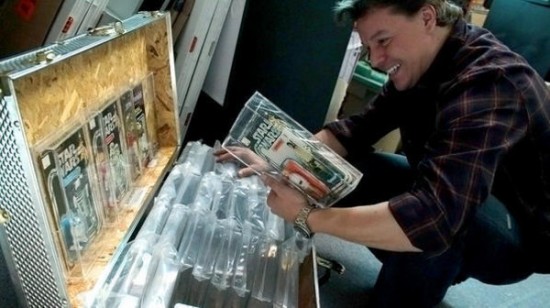 What is Toy Hunter about?

JH: Every Wednesday, you guys are going to tune into Travel Channel and see me go on a great journey. I’m going to go around the country to meet with great collectors; everybody from former Kenner designers in Ohio to flea market pickers in Asheville, North Carolina to vintage toy store owners in Austin, Texas. I’m going to talk about the toys they grew up with, and I’m going to hunt out some of the rare and really cool toys that these guys have stashed away in their attics or basements–even if it’s something like going to a Batman collector in Biloxi, Mississippi to hunt for the really rare Batman toys. I’ll sit and share a moment with these people about their childhoods and why they love what they love. Toy Hunter is going to bring back a lot of those warm and fuzzy memories. 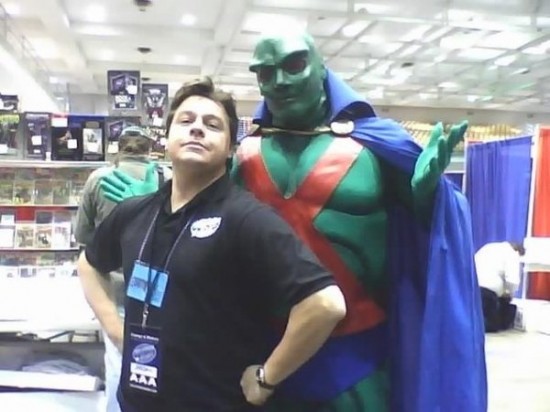 JH: Toys are universal; everyone was a child once and everyone has this real emotional connection with the toys. What really made it easy for the show is I just talked about what I love and what I know. And once you see how excited I get talking about this stuff on TV, you’re going to basically join in with me and get all excited about it. 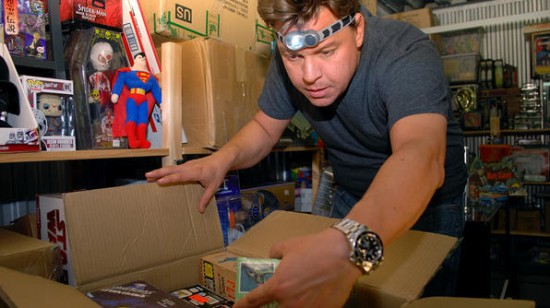 How did you become a reality TV toy hunter?

JH: I came in, and they asked about my background and what I did. And, you know, the one thing that they really wanted to know is, you know, do you do this professionally all the time? And I said, “Yes I do.” And that’s really how they knew that everything was the real deal. Sharp pitched it to Travel and basically said, “Listen, you know, this guy goes around the country all the time and he’s meeting all these great people and visiting all the great cities and seeing America.” We’re really marrying two things that people love to do. People love toys and people love to travel. 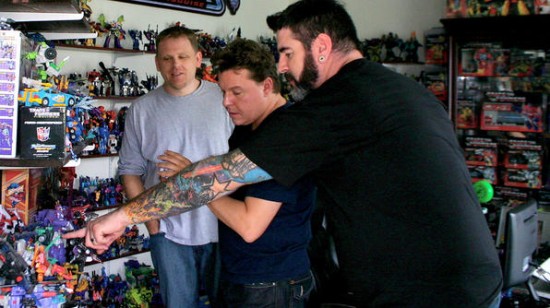 JH: Some of my biggest collectors are women. Some of the people who buy the most expensive toys are women. I’ve got two women collectors both on the west coast, and they spend lots of money, and they love what they do. 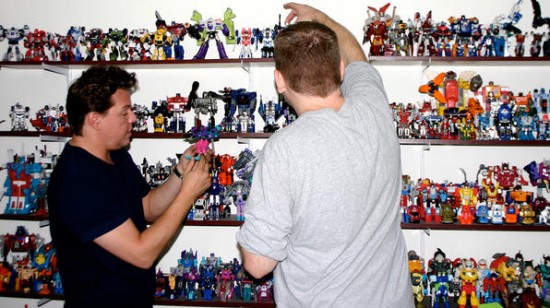 What toy line would you want to see return to the mainstream market?

JH: A lot of them are actually coming back right now. You know, the funny thing is I want to see the vintage Kenner Alien toys return because they were never made. But coincidentally enough, a company called Super7 out of Japan [ed note: by way of San Francisco] is reissuing and making all these old toys. So I’m pretty much content right now on the toy market. I’m a happy camper. 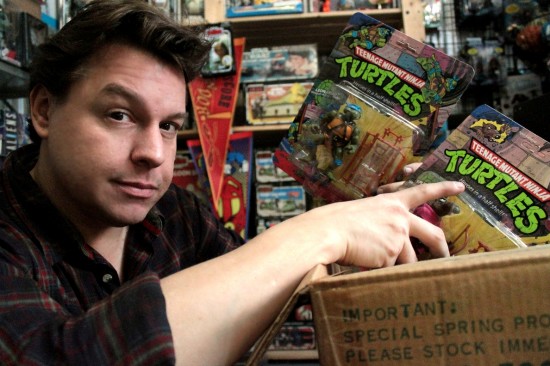 What are some toys of value that 20 and 30-year olds might have stashed away?

JH: I’d say keep an eye on the horizon for Teenage Mutant Ninja Turtles really going up in value. Some of those toys are worth $600 today. And look for Jurassic Park because the Jurassic Park line by Kenner really has started taking off in the secondary market. 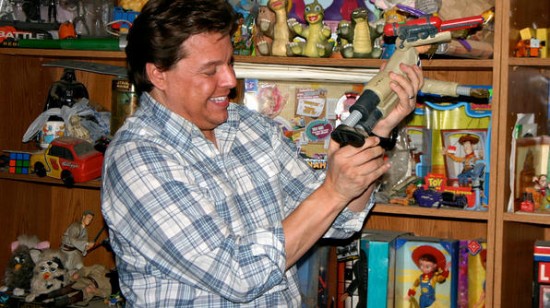 Should I open my mint-in-box toy, and how do I know whether it’s going to be valuable?

JH: First of all, collect what you love and love what you collect. If you’ve got a toy, and it’s from the 70s or 80s and you really, really love it, if it’s already opened and I mean if it’s like a doll or something, and the seal is already broken, sure; take it out. Take it out, display it nicely and everything like that. Save all the packaging, save all the inserts, that type of stuff. But if it’s  sealed and has the original manufacturer’s tape on it, don’t break it open. Find a loose one. Not a lot of people know this, but the estimated shelf life of a toy nowadays is just two weeks on a toy shelf before something else is the next big thing. So everything has very, very short windows. 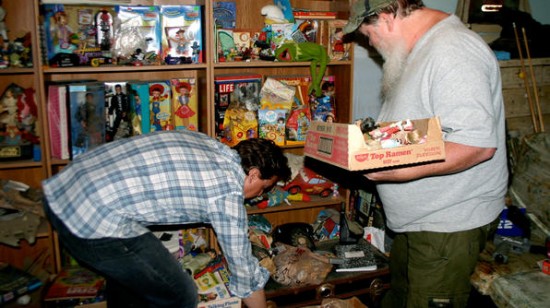 JH: You know, we don’t address too many of those because it really is a specialized niche market. I personally love them. I love all the designer art toys, and for everyone who doesn’t know what we’re talking about, these are like out-of-the-box, artsy kind of figures and caricatures–bears or rabbits–in kind of weird poses. What we’re really trying to accomplish on Toy Hunter, is to really go back and bring back a lot of the memories from the 70s and from our childhoods. I don’t really bring in too much of the urban vinyl right now just because it’s so new; it really became hot within the past five years.

JB: As a collector and a toy hunter how do you not want to keep everything you find for your own collection?

JH: It’s tough. You want to know how I manage it?

JH: It’s called a mortgage. It’s got to get paid every month. You know, I would love to collect and keep everything I find. But I made a decision a long time ago: this is a business. It’s what pays my way through life, everything from house to phone to the car. This is what I do to sustain my living. It does become very, very difficult at times, but what I do is the next best thing: If I can’t keep it for myself, I make sure I find a really, really good buyer who’s going to love it. 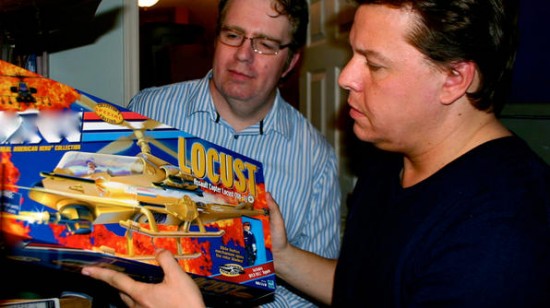 Where is this hobby going?

JH: I like the fact that manufacturers are bringing back old toy lines because it’s that retro feeling that a lot of people like. And I’ll even get more specific on that. I like the fact that parents like myself are able to bring their children into the toy stores and say, “I had that when I was a kid.” And we’re able to share that feeling with the next generation. To me that’s very, very important. It bridges that generational gap, and it gets families into collecting. And I think that’s fantastic for the hobby.

Thanks to the Travel Channel, FerenComm PR and Jordan Hembrough for including me in this discussion! Toy Hunter premiers next Wednesday, August 15th at 10PM with a one-hour season opener (two half hours back-to-back). They’ve already filmed eight episodes for Season 1. The show moves to its permanent time slot, the following Wednesday, August 22nd at 9PM. Find your local channel and set your DVR! I’ll be tuning in. Join me!