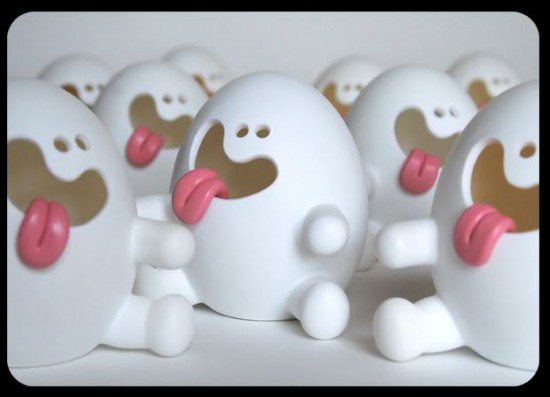 Armed with a youthful, overactive imagination, Jason Freeny creates smart, intricate illustrations that tickle the deviant intellect through a hard graphic, pop iconography and wit. Jason has worked with LEGO, MTV and Nickelodeon and has been featured in the pages of Hi-Fructose, Juxtapoz and Heavy Metal. His anatomy illustrations have circulated the Web from BoingBoing to Nerdcore. You can pick up one of his print pieces here, some wearable art here, and convenient exoskeletons for all your gadgets here. He has, on the horizon, several magazine pieces, a couple top secret product projects and a collaboration with the United Arab Emirates. Every once in a while, Jason returns to 3D form and busts out a choice custom piece. Which brings us to…

You are playing for a customized 3.5-inch Baby Egg Qee based on the platform by Toy2R. The Yolkel is part of a dozen hand-made Qee figures by Jason Freeny. There are no figures like these in production. If you want to score one, leave a comment telling us your best guess as to what Jason eats for breakfast every morning. Closest answer wins the Yolkel!

Q: Tell us about the process of creating this Yolkel (from concept to cutting to kid-testing)?

A: It is very rare that I design a custom. I need to have a smart and solid idea before I’m willing to totally lay waste to my office space for a few weeks. I dont like creating customs just for the sake of creating customs. I always like to create designs that both explore the insides as well as the outsides of the 3D form. I had come up with the eyes and mouth as a negative space some time ago for an illustration. It was meant to be shapes floating in the sky acting as a hole with an alternate universe on the other side. The tongue was a device to illustrate this concept by punching through. To this day I have yet to execute this illustration but the face idea was always floating around in my head. I first used this idea on a Dunny (both small and large) and was very happy with the results. A simple idea is at times the most successful, and the soft defined curves with a goofy hole and tongue exposing the dark space within just worked so well. I was getting request upon request from people to make more of the Dunnys for purchase. Unfortunately Kidrobot doesn’t offer DIY Dunnys, and the design didn’t look as well on their blank Munnys (whose shape is less dynamic). So I basically went on a mission to find the ideal form that I could use to produce a small run that wouldn’t end up costing people an arm and a leg. The Egg Qee [by Toy2R] was perfect.

My process was simple: create a stencil of the face and trace and cut with a very sharp x-acto knife. Then sand the openings till smooth. The tongues were sculpted from a mixture of magenta and white sculpy, baked and given a shiny clear coat via krylon. I always incorporate my 5-year old son in the process when I can; he loves to play with whatever I am working on. He was kept at bay during the cutting process but helped “organize” during the sanding. But mostly he just played with the Qees I wasn’t sanding at the time. Once all the pieces were ready, I glued in the tongues with a little drop of 5-minute epoxy. 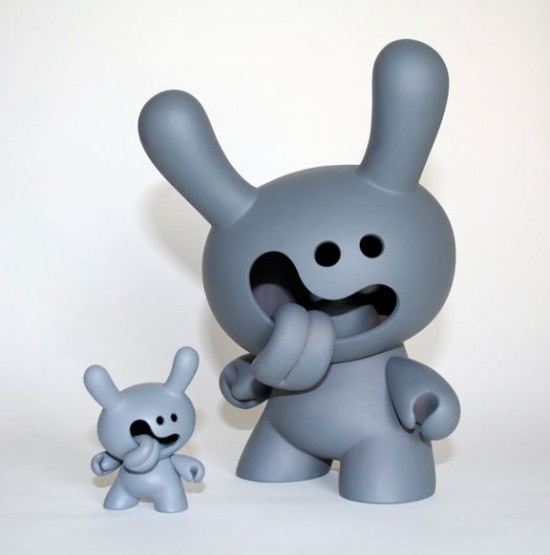 Q: I’m imagining your work area as half design studio and half science lab? How off am I?

A: When we used to live in Manhattan, I had an actual “Design Studio” that was ultimately sacrificed as a baby nursery when my son was born. This event alone was the driving force in my decision to go digital. I was a 100% traditional artist before this time. Everything was drawn, hand painted, airbrushed and sculpted. While the transition from “raw art” to “digital art” was a painful one, I have no regrets and fully embrace what it is I do now. I do still, from time to time, pull out my sketch book and doodle. Now that we live in a house, my wife and I share an office space. It is pretty much strictly a computer room, but at times, like with the egg Qee, I treat myself to some good old handy work.

There is no science lab but I do love anatomy and toys and there is a small collection of both surrounding my desk. When I find an item that encorporates both toy and anatomy, I get very excited. I really want one of those Kaws half-anatomy [Dissected] figures but they have moved out of my price range… Maybe one day… 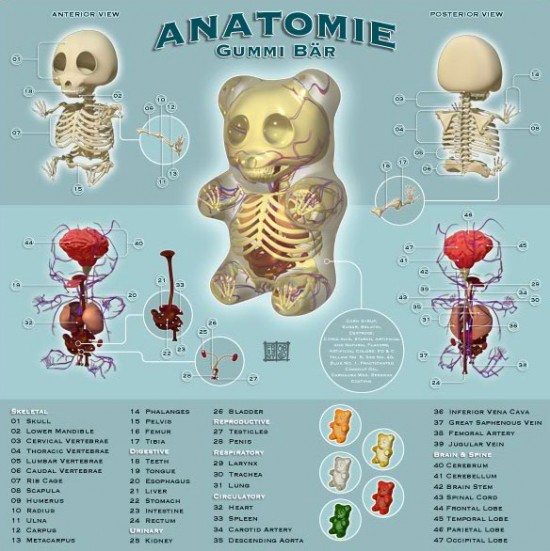 Q: What caused you to first explore the innards of a gummy bear?

A: My first anatomy Illustration was an illustration I did while a freelance illustrator for Penthouse called “Incubus”. It, of course, was adult-oriented and never used, but it did strike an interest in both anatomy and schematic diagrams. The Balloon dog “Pneumatic Anatomica” was the real beginning of what it is that I am doing now. The response to this piece was overwhelming. I started looking at anatomy in just about everything… The Gummi Bear was the next victim. 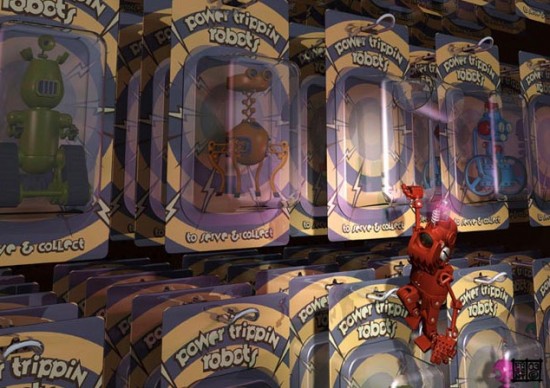 Q: Who/what are some of your artistic inspirations?

A: I find inspiration in just about everything and it is usually completely unexpected. I’ve always found inspiration in the works of masters like Dali and Escher as well as George Petty, Sorayama, Warhol and Robert Williams, to name a few.

Q: What programs/tools do you use in your digital designs?

A: I work on MacPro using Maya, Illustrator and Photoshop 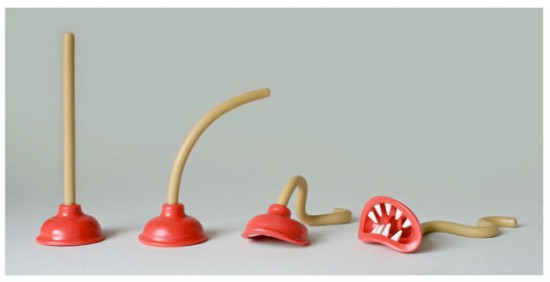 Q: What materials do you use in your sculptures?

A: I sculpt using sculpy and anything else that suits the situation (metal rods, washers, wood etc…)

Q: Do you ever run into people who have your designs as skins on their iPods/laptops/cell phones?

A: Haven’t seen any of my skins/shirts in the wild yet, but I’ll probably be tickled when I actually do. I have had friends spot them though…

Q: Do you have any advice for readers who are looking to license their art?

A: Licensing is a great thing. You are getting paid for something you already did. So my advice is, “yes, license.” The hard part is pricing the license fees. I am still pretty new at this and am getting more knowlegable as it comes. I go to the Graphic Artists Guild Handbook of Pricing and Ethical Guidelines all the time to get a good idea of what a reasonable fee would be. If you do this kind of work, it’s a must have book… 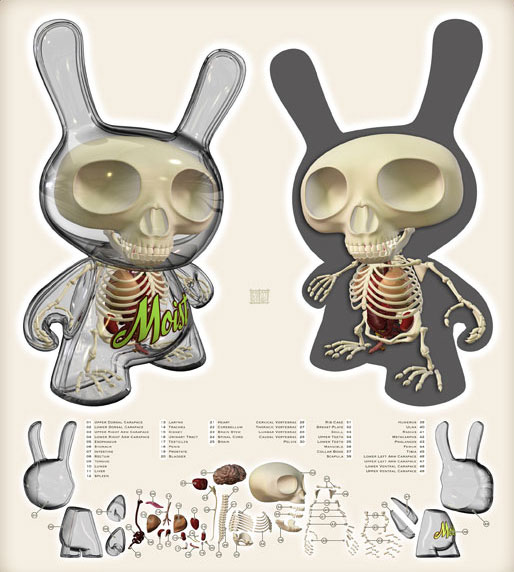 Q: I know you like Toy2R’s Qees and IWG by Rocketworld. What other figures do you collect?

I am usually a sucker for anything decorated by Tim Biskup.

Q: What’s next for Jason Freeny?

A: I have plenty of anatomy schematic ideas in my head ready to be liberated, this includes some illustrations that will keep in the same “humor” but not be a direct anatomy diagram, similar to my “Immaculate Confection” piece. All of these are on hold in the short term due to the influx of projects that are landing on my doorstep recently. I’ve been bombarded with magazine featurettes, ten-plus in the next month alone. I have some product projects in the works but cant really talk about them due to non-disclosure forms, but I am EXTREMELY excited about them to say the least. There is a Harper Collins publication coming out soon showcasing 100 international illustrators for which I was asked to participate. And I am in the process of producing a series of custom posters of my anatomy works to hang on display in the Jumeira Brainobrain youth school system in Dubai UAE.

[This article was written for ToyCyte and first published on 11/24/08. I am reposting it on my own site because 1) I wrote it,  2) It’s a nice record for the artist and 3) ToyCyte is no longer online. You can download a PDF of the story, as it originally appeared (including reader comments), by clicking HERE.]